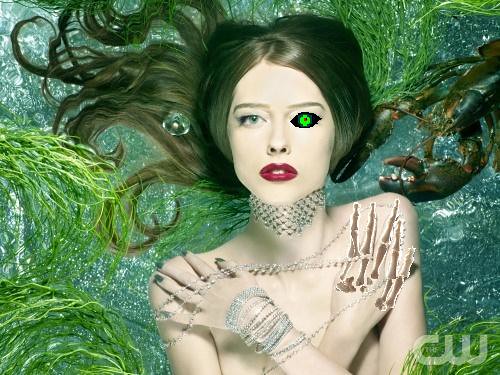 (The Ann of Vecna, Photo by Matthew Rolston, MSPaint graffiti by me.)

Another victory for Ann! She's great, & when she glowered her affection at the departing Rhianna, we all cracked up with laughing & "awws." Yes, Ann, welcome to the club of Weirdo America's Next Top Model contestants; you're in the heyday, in the prime of the club! It used to be that the ANTM weirdos would get to the middle, & then be removed from the show...then when the episodes would actually air, the weirdos would become America's Darling, & ANTM would look bad for kicking them off-- see also, Heather Kuzmich. Allison Harvard broke that trend by making it to the final two, but then the judges let Teyona win...which is madness. Madness. Finally, the curse was lifted when Nicole Fox took her rightful place as the victor, sitting on her throne of skulls & blood eyeballs. Remember that rumor Nicole was going to front McQueen? Shame it wasn't true. Ann is now free from the Sword of Damocles-- she rises & falls on her own merits, & so far, she's had three well deserved wins in a row. The contest this episode was silly-- pictures on a roller coaster-- but I don't mind a silly challenge. I thought it was interesting that they showed head on (apply directly to the forehead!) snaps during the "shoot" but went with three-quarter pictures for the judging; I think some contestants were better in one than they were in the other. Also, Chris-- it is a roller coaster. You don't get props for conquering your fear of something totally mundane. The shoot with Matthew Rolston was fun; they all looked fine, but I find it hard to believe the picture they used for Kayla-- who I think should have won the challenge, by the way, if they'd've gone with the head on (apply directly to the forehead!) picture-- her shoot looked so striking! It is the red hair in large part, the colouration is just shocking. The worst was the absent

fatbutts' favorite, Chelsey, who I said "looks like one of the co-stars on Reba" which everyone said was the meanest thing they'd ever heard. I'll tell you what the funniest thing I've ever heard is--

fordmadoxfraud saying "You know, if you could have one register open that would only ring up Dover books, would you do it? Well, yeah."

elladorian & I laughed for miles & miles on that tank of gas. Speaking of yucks, & of Top Model; if you haven't seen this clip from the finale of Australia's Next Top Model, I recommend it.

I've watched other things, too-- like last night we watched How I Met Your Mother which was in top form; the show has been flagging lately, but they were on point. I give partial credit to Wayne Brady, but also a lot of it highlights the reason the last bit of the show have been terrible: they are too chicken to change any characters. I'd say the moment when HIMYM took a nosedive was when it broke up Barney & Robin. I get that Barney is the easy joke, & Neil Patrick Harris is great-- which is why you should evolve him. Adding dimensions doesn't make a character worse, it makes them better. Also, Robin looked hot in her outfit in last night's episode. Jenny & I also watched the most recent episode of Castle-- I think that his mother's relationship with Chet took a smart turn. The whole episode was fun, & I predicted the ending pretty close to what it ended up being; I picked the wrong one of the two suspects. Close enough. Otherwise, I don't know-- I've gotten to the point where I'm saturated with Daily Show clips from the internet, so the show is more than half repeat by the time I flip it on. Jenny & I watched Hot Tub Time Machine the other day, & it was alright-- just alright, but alright enough that I want them to follow through on their Back to the Future homage & make a sequel where they go to the future. Anyhow, Crispin Glover is great, & I wish Chevy Chase had been Christopher Lloyd. It was too "bro-y," though; listen, I don't care about the complaints of men. Oh, poor widdle guy, did you change your last name to a hyphen? Seriously? Is your point that only ladies should do that? Anyhow, lame-- obviously I thought that was lame, but it is just an example of some of the macho whining that turned me off. Clark Duke was kind of awesome though? I thought he was going to be a poor man's Jonah Hill-- & I hate Jonah Hill-- but he ended up being the wry "Spike" of the show. So, I give it a grade of "A'ight." Otherwise, geez, I got nothin'. I went to the gym on Tuesday & had a very nice bit of exercise; I plan on hitting it up tonight, unless I am told I have to participate in the Great Mattress Swap of 2010. It could happen, you know!
Collapse