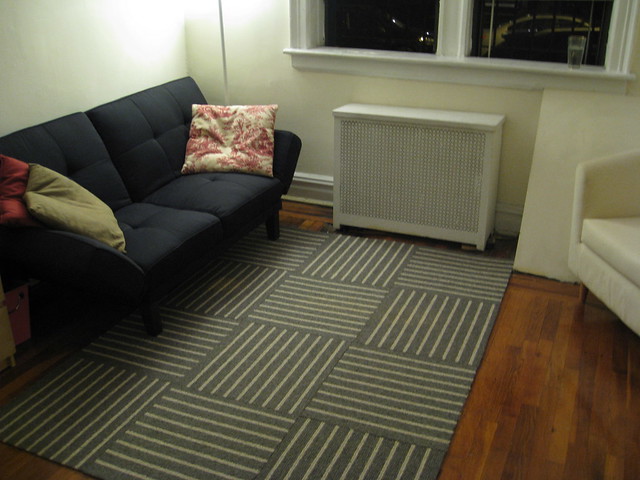 (The following photos are by Jenny, Jordan Levie, & Phil, respectively)

skycornerless had been subleasing our spare room, but they were off for the greener pastures of Thunderdome II in Windsor Terrace. Things were a bit of a slow start, waiting for the truck to arrive-- soon enough we had John & Kevin &

kromelizard, & we all killed some time playing Mario Kart & a little New Super Mario Bros.-- here is a newsflash on that: Kevin is the kind of Luigi who throws Mario & Toad under the bus. Soon enough Emily's dad arrived with the pick-up, & we loaded it all up with boxes & sundry. It went away, & more games were enjoyed, before finally the truck returned & took the last load away. Sayonara! Which left just enough time to vacuum like crazy & shower; then Jenny came home, I kissed her face & abandoned her! I was off, & she was on! Her time to shine. While I was away, she set the rec room up. Couch, carpet, projector-- Jenny even took all my spare RPG stuff in there & set up a little spot for them, what she calls the "DnD Nook." Cute-- super cute.

Meanwhile, I was off to Queens! That is Spider-Man's turf, though my path took me north of there, to Astoria. In fact, to Transylvania! Or close enough-- the Behemian Beer Garden. It was Jocelyn's birthday, & Adam was in town from DC, so my path was clear! It was a two-for, a double down. The Beer garden was an odd locale; the crowd was a mix of people I don't see in my day to day. Goths! There were goths! I had a bratwurst & some onion rings & grabbed a pitcher for the table & we were good to go. There were many people there; but you know what I don't care! My feelings are still hurt that my picture wasn't on the custom "Guess Who?" game. Oh sure Kat, you made a really thoughtful gift & replaced all the pictures on guess who with carefully researched photos of everyone else (Glasses? Hat? The classic questions, the riddles of the ages!) but why am I a back-up tile! I guess this is what I get for being a married fuddy-duddy, for being a shut-in. My just desserts! We had a nice time-- I hung out with Katy a lot, & with Katie & J. Matthew, who could easily be related to

kingtycoon. Then I snuck off! Well, I said probably a quarter of the goodbyes I should have, which is a quarter more than my usual stealth exit! Then I took a wrong turn, but I knew that was a danger, so my Plan B kicked in-- I just walked along 31st...street? Avenue? Road? Who can tell in Queens! I knew the train ran along it, so I'd get to an entrance sooner or later, & poof! I did. 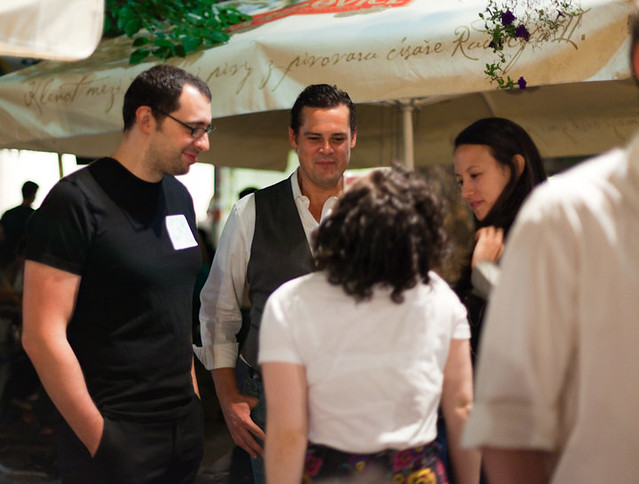 Sunday I woke up bright & early, but heaven's knows I wasn't happy about it. Jenny & I trucked up to Hell's Kitchen to grab Phil, & then we grabbed some breakfast at Amy's Bread. I was starving & thirsty (I had drank all my water on the train ride home the night before) & I had to go to the bathroom, so I was a little cranky, but pain au chocolat & some quiche-- & a stop up to Phil's apartment-- made everything better. We grabbed the bus at Port Authority to go to...New Jersey! That is right, I went to Queens & to New Jersey in one weekend-- & NJ twice in two weekends! Crazy, am I right? Amirite? Buying tickets for the bus was pretty hilarious; I worried about buying "four"-- are you sure they don't sell round-trip? Then I looked at the ticket & realized they only cost $6.75-- so yeah, time to take a chill pill. I spent most of the ride reading comics, & before you know it were were at Aviva's parent's house. Well, we had to walk there from the bus, & Jenny kicked a kid's basketball into the gutter along the way. It was an epic kick, actually-- it went into the street & then rolled about a quarter of a mile, along both street & side walk. It was kind of crazy, now that I think about it. Back to the point at hand-- David & Aviva just had a baby, & this was the naming ceremony-- a simchat bat. You know what? I am super glad I don't have a family. Really, all the kind of awkward interactions with people who are strangers but you have to pretend to like & who you have to pretend to remember? Awful. I wanted to just skulk on the fringes, which is mostly what happened. One of Jenny & Phil & Aviva's friend from NYU, Ben, joined our clique, as did Andrew & Cecilia, eventually.

The ceremony was cute-- the baby is named Sadie, & David talked for a long while about how Anwar Sadat's policies towards Israel were a big influence on her name. & there was lots of talking about dead grandparents. Phil was very good at schmoozing with relatives, but I was pretty much a mess at it. There was a Swamp Thing game in the family's warchest, from the Nancy A. Collins run with Anton Arcane as the villain, all very Pentex. No one else thought it was as exciting as me, so I had to twist arms to get the picture taken. Then eventually it was time to go; Andrew & Cecilia offered us a ride home, which we took them up on! Phil jumped out in Manhattan & we jumped out in Brooklyn, & finally we got home & finally had a minute to relax. We watched some infoMania & then Rotten Tomatoes-- wait, was that just the last episode of Rotten Tomatoes ever? Dammit, it was, that sucks. I knew that the change from user-generated content to critics-only was a bad sign. The show will continue as an infoMania segment, which is worth something, as it will contribute to that show being awesome, but come on! Am I going to be nostalgic for the halcyon days of Current TV, "back when Sarah Haskins was still on, & 'Rotten Tomatoes' was a show, not a segment?" Then I watched two episodes of Castle; hey, I'm always glad when there is a storyline involving vodun where it is just a plot point & not a plot device, not a motive. 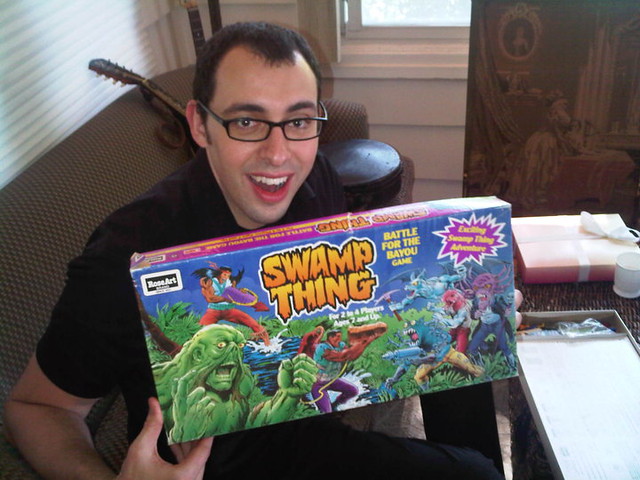 When I came to work today, my to-do list had one entry: □ PSYCHIC MALICE 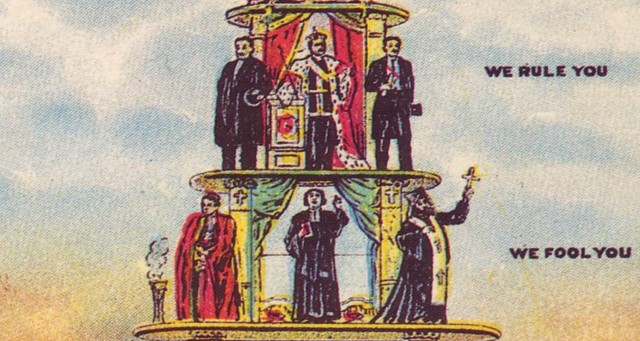 Ethics have been on my mind; largely

martak's Chaos, Hostility, & Murder: A Love Story & The Ethicist are to blame, in the grander scope of things. In the grandest scope of things is the fact that Evil & Skeptisicm are questions; that Nihilism & Solipsism beg further consideration. Most immediately though, I've been thinking about The Prisoner's Dilemma. Not the classic version, but rather the iterative & stranger thought experiments that have spun out of it. I like the elegence of the Prisoner's Dilemma once it is uncoupled from its strict constraints. I like when it starts blooming, starts showing the patterns of complexity. It has been directly on my mind since I watched a clip of the very finale of Bachelor Pad. Now, I don't know anything about that show, but in the following clip, the host lays out a pretty basic version of the Prisoner's Dilemma, & here is the hook: the audience & contestants lose their mind. I've taken it for granted, so seeing people presented with it for the first time is really refreshing, & more to the point, really interesting, because they haven't considered it before. They haven't taken it as a given that they must be prepared for the set-up. Anyhow, it is worth watching:

So Robert Axelrod (In The Evolution of Cooperation, which I confess I haven't read) lays out four descriptive conditions of strategies that do well at The Prisoner's Dilemma: they are Nice, which is to say it presupposes cooperation, unless there is reason not to; they are Retaliating, in that if the other player defects, they punish with their own defection; they are Forgiving, so that they can put aside relaliating & go back to cooperating when the other side starts cooperating; & they are Non-envious, which is to say they don't judge off of the "cheaters" points, but rather optimizing their own. Those are pretty decent evidence for the success of Ethics; then again, that is sort of the point of game theory. This is the sort of thing that makes me angry about state bailouts & light punishments for white collar crime; those are the defections we should be punishing. The whole point of government, if you ask me, can be reduced to "make cooperating the best option & defecting the worst option." Do it with the carrot & the stick, use every trick in the book. Anyhow; I think about the Dilemma a lot, so seeing it with fresh eyes was fun.

Earth is a cinder,
but Radio Free Gaga
tells us to fight on.

I don't understand the haters on Lady Gaga; people don't razz people who write in genres about not inventing every trope. Hey you, space ships? We already had those! Closed door murder? You didn't invent that! Lizzy Goodman gets that Lady Gaga is operating in a milieu, creating a body of work in the genre of pop music. & I do mean a body, in all that it implies. This is a nice big coffee table book, which I picked up for the pictures more than anything, but I was happy to see that Goodman has intelligent things to say in her very breezy style. She traces Gaga's roots, & doesn't stop at the close but no cigar answer of Madonna-- I mean, Freddy Mercury & David Bowie are obviously the real kingpins in Gaga's pantheon, right? Draw straws to see who gets heaven & who gets hell, boys. Lady Gaga & Damien Hirst & their ilk are the new demi-gods, adventuring on Midgard. Goodman drops a few clever turns of phrase, too; I especially liked when she compared Lady Gaga to skipping the Moulin Rouge for the Grand-Guignol.

Every so often I look at a book like this & am pleasantly surprised by the price point. Twenty dollars? That-- that is entirely reasonable? Wow. I called this a "coffee table book" & it is, in the very real sense of the word. If you put this on your coffee table, people will pick it up & leaf through it. It isn't a stuffy book you put there to make guests marvel at how erudite you pretend you are: this is a book that is worth having so that people can marvel at Gaga. You flip through & get to relive her performances, you get to stop & take a long gander at the spectacle. The book's reading line has "fashion" in it, & that is the solid draw here-- the visual component of Gaga's burlesque. Just lovely; I can't get enough of the fact that she has actual taste. She's her own handler. The book closes with a quick do-it-yourself primer, a crash course on Gaga's influences, both fashion & musical. All in all, I'm surprisingly charmed; I grabbed it up to see Gaga in great outfits, but got more than I bargained for.
Collapse