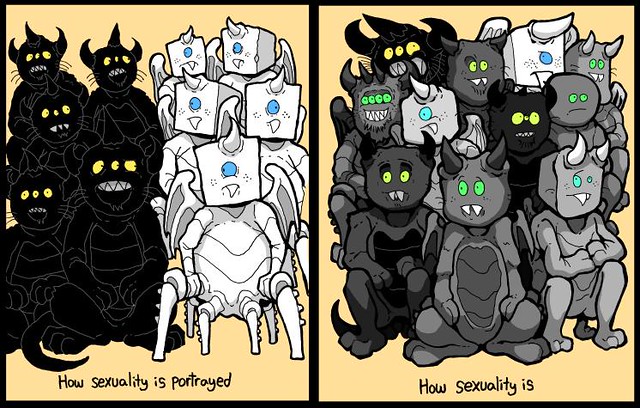 Pretty accomplished Friday at ye olde office, I don't mind saying. I ended up getting a fairly large amount of work done, without even being rushed to do it. All the galleys that have come in have been sent out, for example! Which, good for me. This has been a week of prepping for trade shows, & my boss' boss freaking me out with things like "I need you to clear off your schedule, I have a project you need to prioritize on," but then having those projects end up being just the work of a few moments. Anyhow, I normally don't like to dwell on the banal-- or hell, who am I kidding, I'll dwell on whatever I want. Also, the Pentagon wants to buy all our books, & that is hilarious. So; then after work I went over to Matt's apartment. I haven't hung out with work people in a while-- when Kat moved from her apartment in the Village with the backyard, things got shaky. Also, I am a homebody. I was long over-due to see work-friends, though, so at the last minute I decided I would. Brian & Matt & I walked down to Trader Joe's to pick up supplies, & then we went to Chelsea. Cutting through Time's Square is always weird, but it seems to be the way. Katie was there, & I haven't seen her in a while, so that was nice. Their apartment is very long & has exposed brick but the only thing I'm jealous of is that they have a washer & drier. That kind of eats me up inside. We all hung out for a bit & then Jocelyn showed up, followed shortly by Kat. There was talk about music-- Gizzly Bear & Jenny Lewis, mostly. There was talk about superheroes-- Batman lost in time & Kill Bill's Superman Hypothesis. We staged a dramatic reading of an online flame war between Kat & her sister, & I was Kat. Katie made matzah ball soup! So that was for eating. We ended up playing Pictionary, joking about being old people. We are old, it is awesome. Matt & I were a team & we dominated; we only played for five points, so I drew twice-- once was "peach fuzz," the other was "over-bite." Matt drew "circulation" for the win, but I don't recall our other two clues. After that I was ready to leave, but the sirens sucked me in saying "lets just play a little Mario 3!" All said & done I got home about ten, to a wary Jenny, & went to bed after eating a ton of left-overs; it turns out I had skipped dinner! Except for soup & some cheese. Now I have to stop dragging my feet & get ready for