I wonder if maybe I've been fighting off a cold? It would explain my fussiness & my lethargy & my strange appetites. Also, Jenny has been fighting off a cold, & we make-out. It is a theory! Though of course yesterday's bad mood was in part because I struggled with that Influence Map as though I had fingers of lead & a head full of cotton wool. Today so far I've succeeded in drawing a map-- finally! I've been sort of struggling with this map for a little bit, & I finally sort of cheated by using hexes. Now of course I have to smooth out the edges, but I'm fairly pleased with how it turned out. The heavy lifting has been done. Also, I killed Dracula! Another triumph for the Belmont clan. I only recently downloaded "Castlevania: the Adventure" Rebirth (how the heck do you punctuate that title?) but as it is an action game, beating it so quickly isn't a mark against it. I liked it-- it is very old school. I didn't like that as things got "harder" the monsters just dealt more damage-- like, I hate games where increasing the difficulty just means the AI "cheats"--- but the quality of the game wasn't harmed by it. The backgrounds are interesting & matter to the level-- there are gears & moving pieces in the clocktower, there are dripping caves & secret passages in the moat, that kind of thing. Dracula was pretty hard, unless you concentrate, & even then his third form is a pain in the neck-- pun totally intended. Otherwise? Jenny upgraded iTunes & cleaned out the hard-drive of duplicates & songs we don't need, & labeled some stuff, like the songs from the wedding. I've been listening to Jenny & Johnny's I'm Having Fun Now, & I like it a lot. I like it when artists "keep it real." Yeah, Jenny Lewis's lonely songs have been the antiphon to some lonesome Mordicai-times, but now I'm all happily coupled & she's all happily coupled & I'm glad she's making fun songs about having a boyfriend. Right on, darling. & "Animal" is clearly the stand-out track, right? Oh, & in other good news, one of my players-- Tracey-- actually read my house rules post about magic & was interested in it, at least conceptually. Always nice to know that you pet projects aren't totally in vain. In bad news, last night some people in our building came home from the bar at four in the morning with some friends. Loud drunk morons were noisy in the hallway & noisy in the courtyard, since their windows were open. Again, this doesn't happen often-- not since the last time I complained about it. It is a holiday weekend, so I should settle down, but also, waking people up is a jerk move. I don't know who the people are, but my bias is against the guys with beards. 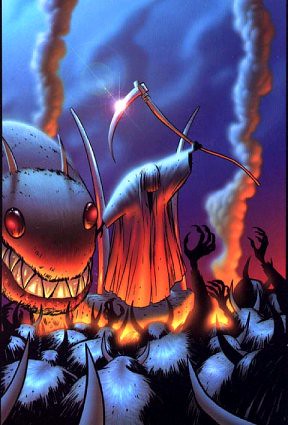 You are the leader of a group of some kind, whether you are a centurion in an imperial army, the kingpin of a gang of child thieves, or the mother superior of an abbey of nuns. Whatever the case, you have a small army of devotees. It is important to note that these Followers are not exceptional-- that is the provenance of Retainers, who stand far above Followers in terms of quality & narrative importance. Your Retainers & Followers may belong to the same organization-- you may represent a lieutenant, apprentice, samurai, or your right hand man as a Retainer-- but your Followers are more mundane adherents-- the conscripts, the goons, the ashigaru, the rank & file. Your Followers are represented by two factors-- size & loyalty. Players who choose this Merit can allocate their points as they wish.

Followers Size varies depending on whether they are trained or untrained. Unskilled Followers might represent untrained laborers who have professed you to be a religious figure, the workers of a factory you have freed from their taskmaster, or the inhabitants of a village below your castle. Skilled Followers might be a group of firearm wielding musketeers, a wandering tribe of caravan dwelling thieves, or academically minded seminarians. Whatever the case, the more skilled the Followers, the fewer their number, as per the following:

These henchmen differ from a Retainer & Allies in terms of devotion. Retainer can be assumed to perform your character's bidding as a default (baring outrageous circumstances) & Allies will grant favors according their rating-- & will expect quid pro quo. Followers will generally obey your characters without expecting favors in return, but they will also expect to be treated well & to share in the character's good fortune. When asked to do something risky, dangerous, or at personal cost, your Followers may balk. The strength of your Follower's allegiance to you is measured by their Follower Loyalty, with • of Follower Loyalty representing mercenary interests or fair-weather friends, & ••••• in Follower Loyalty suggesting incorruptible fealty or zealous ardor. Follower Loyalty also represents bonus dice that you may add to any Social roll against your Followers-- your bond with them allows you to, among other things, Intimidate, Persuade, Socialize, with them easily.

White Rabbit is an incarnation of one of the the Celestial Hierarchy, a religious leader beloved by a nation-- for all that he is just a poor sixteen year old boy. His Player wants to represent the adherents of the Shining Horde who have elected to follow White Rabbit. Because White Rabbit is starting the campaign with a body guard & mentor, played by another PC, the Player elects to portray his disciples with Followers. He puts four points in to the Merit, splitting them evenly, giving him Followers Size •• & Follower Loyalty ••. White Rabbit has twelve unskilled pilgrims who have given up their life to follow him, & as a new avatar they expect that he will take care of them, & may become angry if he doesn't.
Collapse