The Casebook of Victor Frankenstein by Peter Ackroyd.

Our homunculus
danced upon his hands, & sang
"hey nonny nonny."

You know, until I actually had this in my hands, my brain perceived the cover of this book as Leonardo Da Vinci's heart sketches, when in fact it isn't at all. In the final analysis I am left disappointed in this book. It is probably worth noting that Frankenstein is a favorite of mine-- & of course I root for The Creature. I like to think of The Creature as Adam Frankenstein, but really? In my heart of hearts I consider The Creature to be Adam Kadmon. He's the hermetic man! He isn't the golem, but the transhuman, the transcendent man. & the retreat to the Ice? Yes, I do like the Frankenstein mythology in all its glory & silliness. I am a proponent of the Beautiful Monster theory: I say The Creature was gorgeous, perfect, but that he was "deformed" by a sense of Uncanny surrounding him. He was only ugly in the eyes of the fearful. & if you were to ask me, when pressed, for the best ancillary portrayal of "Frankenstein"-- because I think he's Adam Frankenstein, I have no qualms about calling The Creature Frankenstein; language evolves, that is how it works-- is Promethean: The Created, a role-playing game that unites the mythology of golems, mummies & Eurasian shamans with Pygmalion & Galatia & Frankenstein & The Creature.

So suffice to say...I had expectations. & Ackroyd's flaws are certainly not in execution. When I started reading the book, the distinctive style of pseudoarchaic prose immediately reminded me that I have in fact read Ackroyd before; on

fordmadoxfraud's urging, I read Hawksmoor & came away from that lukewarm, as well. How you make me think a novel about Satanic serial killings & post-Great Fire architectural reconstruction is mediocre is beyond me; I'm in that niche! Something just didn't come together, in both Hawksmoor but that isn't the problem here. I found the writing gorgeous & entertaining, & the characters are compelling-- but then, hubris & romanticism are a heady brew. I'm all about the fist shaken in anger at the heavens, but I'm also all about the notion that if it can be done, it must be done. Basically, I'm the cautionary tale that these stories warn about, is the moral. I think the obsession with London was a bit strange & I would have liked to see the story set in Geneva more, but that is neither here nor there. Regardless, that is Ackroyd's "thing," so it seems pointless to argue it. The relationships of the book focus on integrating the fictional Victor Frankenstein with the historical crew surrounding the writing of Frankenstein; or The Modern Prometheus: first Bysshe Shelley, then Byron, then finally Mary Shelley herself. I wondered about The Creature-- would it appear in the novel? Would it appear at the very end? The very beginning? The answer is "somewhere in the middle," but I have to say, that was probably the moment my heart broke & the book started souring. The building of Frankenstein's laboratory was grand, his experiments & notes captivating, his relationships with resurrection men perilous. & then...the monster is boring. There are no sewn body parts, there is no captured lightning, there is just a banal flipping of a switch. Now sure, those are to some degree modern innovations on the myth, but they are good innovation, & ones that should be conserved in retelling. That is how stories work! You glean the best parts & leave behind the non-essentials when you retell them.

Spoilers.
Really though, it is the end that chucks the whole thing in the fire. I may have thought The Creature's creation was boring, but his portrayal is excellent, from his lovely & lyrical voice to his reoccurring association with bodies of water. Ultimately, though, my worst fears were realized; in the final page the whole thing is revealed to be a farce, The Creature a figment of Victor's imagination, a psychological scape-goat for the murder's he's committed. Yawn. I mentioned how the "twist" in Home Fires is excellent for being a turn in the story & not a cheap parlor trick. This was definitely the latter. Now, Ackroyd had laid on the foreshadowing thickly, but I held out hope. In fact, the "dark figures" of the book I thought were the rustling of angel's wings, the hauntings of the supernal-- or I should say, I wanted them to be. Wrestle with the angel, Israel! The "it was all a dream!" ending is typical of the Literary Genre, especially when it intersects with Science Fiction-- see also, how Jonathan Lethem can't help but ruin his books by trying to be "clever" in an "artsy" way. A much more daring choice would have been to embrace the preternatural, but no; instead the novel falls flat on its face. The gymnastics of the writing are retroactively compromised because it doesn't stick the landing. Making the novel the diary of a madman is insulting-- it doesn't go against expectation, but rather gives in to the weakest impulses. For all that the book was enjoyable & full of stunning prose, the bitter taste of a cheap twist keeps it from soaring of living up to its potential. Very sad, because there were parts when I really thought this would be enshrined as one of my favorites, as it danced between an adored subject & delicate composition. Alas & alack, the moth was drawn too close to the flame. In a way, the overweening hubris of the creator spelled its doom-- how morosely appropriately.

Alexander McQueen: Genius of a Generation by Kristin Knox.

The Other World slipped
& McQueen saw into It.
like Lovecraft, with clothes.

People like to talk about their influences. In role-playing games, it is usually a list of books & movies, maybe some songs. Maybe I don't say this enough, then-- Alexander McQueen is a huge influence on my setting, Oubliette...but then, you probably already knew that. Still, the credit deserves to be made more firmly. Fashion is a medium too often neglected, or rather, too often compartmentalized. & nobody should put baby in the corner. There shouldn't be segmentation between art nerds & fashion nerds & game nerds. We're all in the same soup of worldbuilding. I know it is cliche to be obsessed with McQueen, now that Gaga & his death have elevated him fulling into the public eye, but so what. He's amazing. He deserves to be "the famous one." Heck, I like certain celebrities just because they wear McQueen. I was reading Extreme Beauty: The Body Transformed when I heard that he'd killed himself, & when I finished I wondered if I might find a new star in Thierry Mugler or Viktor & Rolf or what. So far nothing has taken. McQueen still reigns supreme, & this book is like a steaming helping of whoah. Many of his looks I'm familiar with-- I've dressed characters in his "chain mail" before, for instance, & his Spring/Summer 2001 Asylum collection is still melting my face off, but there were plenty of pieces I'd missed before; certainly the less theatrical & costume-y things weren't on my radar. I'm tempted to chase down each piece & try to describe it, but that would be fruitless-- suffice to say there is enough mind-blowing fashion photography in here to justify owning it forever & ever. In particular on this reading I was really moved by the Asian armor influences-- there is some great Legend of the Five Rings imagination fodder in here. His final collection appears in part, as an epilogue, but it left out my favorite piece, so I will leave you with that. 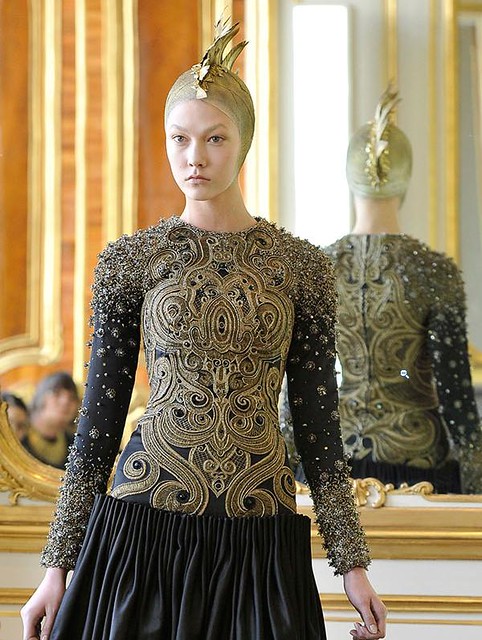 Nice lazy day! I took the day off work for a fat four day weekend, & have squandered today in leisure. Hooray! That is mostly what I'm interested in, anyhow-- boring old shut-in. Yesterday after work I came on home & met up with Jenny & Kira to help with moving-- Kira & Nino's new place is .3 miles farther away, which is sad, but it is nice. We lifted things, & such. Then Nino came home from work, & we went to Amorina for dinner of pizza & pasta. Well, dinner mostly of making fun of each other on the topic of mathematics-- fractions, in particular. We are deep & subtle mages! I made some jape that made Kira crack up like crazy, but I forgot it. Maybe it was how I kept cutting a piece of pizza in half, over & over? The pizza was good, the pasta was good, the service was ridiculously low. Our server didn't have a pad of paper, but also couldn't remember our order-- he kept asking! Get a pad of paper, then, guy! Anyhow, we finished up & Jenny & I walked home. So far today I've done very little besides watch Date Night, which was...fine? It is as mediocre as you'd expect, but we realized that Kira's cousin Joe is basically Mark Wahlberg. There were a few laughs, but it was yeah, just a safe, boring movie. Oh, & remember those Choice of... games? Well there is a new one, Choice of Romance, & it is a bunch of fun. It is set in a sort of feudal quasi-Spain, with magic & gender equality. I was doing well, but was dumb & poor-- I decided to pursue true love, but then I was tempted by power! I courted the queen & killed her consort with death magic, & it backfired on me. Pursuing the queen ruined my reputation, but my magical power was unequaled-- here are my ending stats. & I finally stopped reading Octopus Pie, with this strip. Seriously, people are like, ashamed to like Lady Gaga? Oh you pretentious useless morons. Ever since the author moved away from New York, it has become one of those "oh New York must be terrible, else why should I have left it?" fables, which annoy me. I get it, you moved. Seriously though, the self-loathing & shame at utterly innocuous things has come to characterize the comic, & I've found myself annoyed at it pretty much every time I see it. "Oh no! Is it ironic enough?" I don't care.
Collapse