Let me start with a comparison to the previous books-- not a pithy one, just a straight up greater than or less than. I liked this less than The Hunger Games but more than Catching Fire (though maybe not the other Catching Fire). I have been developing a theory, something born into being by this book. The Master Theory of Young Adult Protagonists. I think YA characters fall on a spectrum, & slide up & down the spectrum as the story progresses. Damage <-------> Competency. I think those two poles are the poles of the genre; or at least, of the people in the stories. I prefer the character's bent towards "Competency," (see also The Queen's Thief series & Pierce's Trickster's... books) but I can handle a little of the damage, if it is deserved-- which is where Hunger Games falls (& for instance, the Graceling books). Catching Fire was much more muddled, much more damaged, & frankly, I was over it. There was too much re-tread ground, not enough character growth. Frankly, I thought Catching Fire would be the book that Mockingjay turned out to be. For a second, I thought it was going to be full of Katniss waffling back & forth, but before too long she got some guts. Not enough guts, though, & not enough discipline. I've complained about the petulant & needlessly rebellious adolescent before-- some readers excuse it because "hey, isn't that what teenagers are like?" Maybe, but they also aren't post-apocalyptic survivors of elaborate gladiatorial scenarios. I wanted this to be the book about Katniss being a grown-up; about Katniss understanding that people are dying & suffering for her, & not squandering their lives. There was a little of that, but what I really wanted was a little more steel in Katniss' spine. My favorite characters, then, were the adults-- as with the whole series. Boggs, Cinna, even Haymitch. Even Finnick, who has damage enough to go around, ends up moving forward. Then again, being in love will do that.

I shouldn't leave you thinking I didn't like it! I did, I really did. I liked how different its tone was. I like how the "high-tech" science-fiction crept in-- Katniss in her ninja armor with her science bow, hovertanks, that kind of thing. That was an important facet of the world & one I was glad they revealed. The dystopian District 13 with its tattooed schedules & caloric monitoring hiding in the semi-functional bunker-city really worked for me, especially in comparison to the Neo-Dark Age District 12 & the Fading Sun Capitol. The integration of Capitol & 12 character's worked too; the pierced tongues & dyed hair, the homespun charm & big appetites, the communalism & militarism-- it worked. The worldbuilding of this book was great, the best of the three, & that means a lot to me. & personally, I found the ending satisfying. I even ended up liking Peeta, as he gets some excuse on the Damage/Competency scale for being really badly broken-- & for being a side character. I would have liked Katniss to be a little more aware of her agency, but I've already stated that I didn't like where her button was on the Damage/Competency scale. Katniss shown on camera & failed in person-- that was the story & I got it, but it left me feeling sour. The climax of the book? & the final resolution, before the epilogue? Of course it had to end that way; I always knew. First, I was happy Collins kept referring to President Snow's mouth smelling like blood. That was an amazing piece of imagery-- maybe the best piece in the whole series. I don't know what the buzz is about the conclusion, I don't know what people are saying-- there were no galleys! Not even for the publicist!-- but I liked it. Some of it might be seen as gratuitous & I might agree with that. I liked it. End of story. 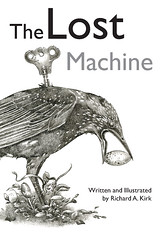 The Lost Machine by Richard A. Kirk.

He fell from the sky,
Starling, that is. I say.
I know about Falls.

I've read Richard A. Kirk's blog for a little while now, impressed by the complexity, detail & subtly alien nature of his artwork; when he said he had an illustrated novel for sale, I was only too happy to support him. Especially since it involved loot for me! Mike Mignola wrote the introduction, & it is pretty spot on-- I won't belabor it. Instead, I'll tell you that the post-apocalyptic world Mister Kirk paints is vibrant & rich with the little touches that make it seem real, inevitable. The sting of smoke from the burning spindles of rubber coated copper wire is one thing, but the sparks, the crackle of the burn-- that is real. Richard's attention to the small scale, & the use of the local to hint at the general, reminds me of what I'm trying to do with my Oubliette campaign, which makes sense, since I stumbled upon him looking for inspiration, ideas, illustrations. One detail is especially of note, if I'm mentioning role-playing games: short of when Jack Vance invented IOUN stones, Richard A. Kirk is the only author who manages to pay just the right amount of attention to the spinning coloured stones. Not too much, not too little. I don't know if IOUN stones were an inspiration for Irridis' discs, but that is what they evoked in my little mind. You won't be shocked by the revelations in the book, but that doesn't make them any less potent-- the revelations aren't for you, the reader, but rather for Moss, the character. The pictures are typical of Richard A. Kirk's work, filigree & enough unexplained flourishes to leave you wanting more, looking for answers to riddles in the ink. There are vignettes, diversions, explorations-- all present, as the book moves steadily along the arc of its trajectory. I quite liked it, & maybe it was the Mignola introduction (of course it was) but it reminded me in tone & pacing of a less salty Baltimore; but of course that is silly. It is more like The Child Thief, or Strange Birds...but then, I only think that because it is a novel with pictures in it. No, there isn't an easy comparison to make, & I recommend it on that merit.
Collapse