Jane's physics could kill,
long lost in the sea of Blue.
Her hands ached for more.

Home Fires is the story of a couple torn apart by war. She ships off to serve while he stays home to build a life for when she returns. Of course, the war is set on a far off world, & due to the vagaries of space-time dilatation at high speeds, she returns just a few months older while he has aged twenty years. Their May-December romance is of course complicated. The world the story is set in is an odd future-- like the future of Mad Men perhaps, a future of a past that skips our current history. Or a history that, in cycles, returns to old patterns. The man-- Skip, a lawyer-- takes his partner ("contracto," the civil & religious ceremonies of marriage having been split) on a cruise to win his love-- Mastergunner Chelle-- back, along with her mother-- more or less-- & they are swept up in the machinations of one of Robert Louis Stevenson's Suicide Clubs, or the stratagems of spies, or both, or neither. Shockingly, all is revealed by the end-- that is the thing that gets me the most. Gene Wolfe has a tendency to leave you guessing, to never spell out just what has been going on-- yet here, he does. The inquisitive Skip's barrister background makes him both good at ferreting out the truth & laying it out. So caught up in the plot-- & the plotting-- was I that I totally didn't see the final "twist" (by which I emphatically don't mean an M. Night Shyamalan anagnorisis) coming. So obvious that I over-looked it entirely. I think Home Fires, like many of Mister Wolfe's recent novels, is the sort of narrative that he would have once written as a short story & then put aside. In fleshing them out into full novels he provides something eminently readable & very intimate. They become character studies-- because Gene Wolfe has written enough tight novellas & shorter works, he has room to lay out the story while paying attention to the tucked away parcels of the characters.

A feminist reading of Gene Wolfe is tough; in things like The Book of the New Sun, women tend to be accessories after the fact-- though the relationship between Severian & Thecla ends up a little genderqueer, doesn't it? Really though, the fact of the matter is that Gene Wolfe's view point characters are overwhelmingly male. This is starting to change in his recent works, to evolve. In An Evil Guest, we get a female protagonist negotiating his Cthulhu-Noir world. Here we are back to a male protagonist, but there is a much wider range of female diversity around him. This results in some interesting interplay. My take on Gene Wolfe's ideas of gender is fairly "essentialist." Gene Wolfe's men & women are different. They want different things, they react differently-- the fundamental ground state of "man" & "woman" (which is much different than "male" & "female") is one of black boxes. Or at least-- the narrators of Home Fires, & Gene Wolfe's other similar works (There Are Doors springs to mind) seem befuddled by the nature of women. The motives of the female of the species are opaque; they can be guessed at, but are ultimately occult. Similarly, the women seem to have their own ideas of how the male psyche works, which is only accurate in broad strokes, & riddled with what the narrators perceive as inaccuracies. This is an old fashioned tale-- as I mention, the "future" seems to be the future of the 50's & 60's-- so those roles are ready fashioned in society. The thing that Home Fires does to make easy critique moot is explode the gender strictures, in specific, while acknowledging their existence in the world. He touches on the sexism built into the system, while reversing the expected dynamic of the story. The woman is the warrior, the killer, the soldier; she went away to war while the man stayed home. Now of course, nothing is so simple as that-- the man stayed home & worked, & had a "sleep with the secretary" dynamic, fulfilling gender roles in another way-- but being complex is a good thing. & of course, we see cuckolding again as a motif; sexual infidelity is often a powerful motive or turning point in Gene Wolfe's work, as is forgiveness-- as we see with Silk & Hyacinth in The Book of the Long Sun, & Sir Able & Disiri in The Wizard Knight.

In speaking about aliens in Gene Wolfe's work, I've often remarked on the prevalence of the "shapeshifting alien," which I think is an ingenious device, as well as a potential backdoor connection between various works (yes, I'm one of those sorts that thinks Fifth Head of Cerebus belongs to the same universe as the Books of the Long Sun & New Sun, even though it is just a pet theory & beside the point). The Os, who are kept off stage the entire time & of whom little detail is given, don't seem to be shapeshifters. If they were, they wouldn't need spies, eh? Well. So if we're trying to draw connections between the books, I can't think of anything I would hook onto Home Fires. The Os are a hook to hang the story on-- there are aliens, they want the same sorts of habitable worlds we want, they don't quite understand human thinking, the end. Are they the "Os," the bone people? The "Ohs," ring people or flying saucer riders? No answers. We don't get anything else. Of course, we do get a sudden intrusion of the supernatural-- there is an interjection of voodoo right smack dab in the middle-- but that is well within Gene Wolfe's stated parameters of "science fiction." As he has said about hypnotism-- it may not be part of the scientific world, but it is definitely part of the real world. Religious experiences definitely head under that rubric. Wolfe spends time musing on identity & memory, familiar themes for him. He tackles them in new ways, with a strong dose of doubt, which as I mentioned before, he unexpectedly clears up. Fans of Wolfe's style of the carefully placed clue will enjoy looking for them & spotting them-- those who aren't fans will be relieved when the characters later point those clues out. There is adventure, there is drama, there are all the hallmarks of quality writing. The moral of the story is: this is a self-contained, charming novel whose Venn diagram overlaps with Thriller, Romance, & Military Fiction. He deftly takes a sprinkling of each genre to make an utterly readable book that defies convention-- unless it uses that convention to tell the story. A strong satisfying conclusion that I didn't see coming was just the finish I was looking for. 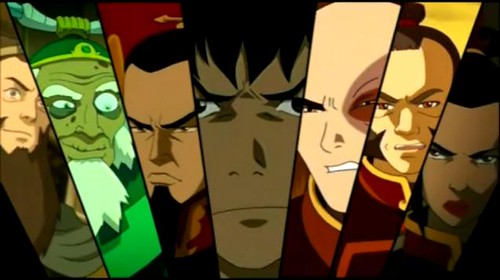 What have I been up to this week? Absolutely nothing. Say it again! Absolutely nothing! I finally did chuck my hat into the ring on Sunday & go to the gym. That means it was a hat-trick! I went every day of the weekend, good for me. On the flip-side, I think I've been slacking off on my thigh presses; after a strong showing on Sunday, my legs were wrecked on Tueday & Wednesday. Just sore muscles, but enough to ground me. Couldn't tell you if anything else happened-- but I can probably tell you that nothing did. Oh, we did get our act together & go over to Kira & Nino's apartment to watch True Blood. I wore flip flops in the rain & everyone thought that was crazy. I also ate ice cream & everyone thought that was crazy. It was Deep Chocolate with Peanut Butter, & I put nuts on top. The episode? Was a pause in the mayhem, which was needed-- & full of "revelations." There are people who didn't know Sookie was part faerie? Nino was all like "you called it!" & Jenny was like "wait, everyone knows that," & I was like "don't ruin this for me!" So yeah; Sookie is a faerie, we all knew that. & we called it with were-panther. & Jason finally came clean, & Tara is back to being loathsome & Lala & Jesus had the most adorable acid trip. & they took Russel out of the rising action in a plausible way, allowing the interlude. I normally don't drink the Eric kool-aide, but he does look super hot in next week's episode.

Monday was my Oubliette game, which went well...then I came home & was in bed immediately thereafter. Tuesday, sheesh-- I have no idea what I did on Tuesday. I was pretty fussy, I remember that-- tired, & my legs hurt. Oh, I picked up our CSA! We got a bunch of tomatoes (ten?), five ears of corn, a bunch of turnips, two heads of lettuce, two heads of fennel, a bunch of basil, dandelion greens, five cucumbers, twelve nectarines, a quart of plums, & probably some other stuff I'm forgetting. I always forget stuff, because there is a bunch. I managed to review a book but that is about it-- I don't think I even read or watched television. Maybe I did, but I probably just goofed around online. Which I didn't do, last night! Last night I finished Home Fires so that I could start Mockingjay. I had plenty of time to read, since Jenny fell asleep as soon as I got home! Coming home was a chore-- the N train stopped, & Kelly (who I'd been riding with) & I got out & walked to the F. Along the way I ran into Jocelyn, & then on the train I ran into Jon. I used to think, before I moved her, that running into people you knew on the street was how you'd know you "made it" in the city of Metropolis. I guess I have, lil' Mordicai! Anyhow, I was starving-- I'd skipped lunch-- & so I got tacos & a hamburger & ribs. Hungry! Then, yeah-- Jenny fell asleep immediately after eating. At one point I moved her feet from my lap to get water & she shot daggers at me with her eyes-- I cracked up, & then she mad a sad face, & went back to bed. Oh, I've had lunches, too-- I said good-bye to

ankledeepruins since she's off to the Wastelands to be a scholar of dead civilizations. Fitting. Then today I had lunch in the Park with Brian & Jocelyn. That...that might be it. Or I could be wrong, I'm terrible at telling.
Collapse