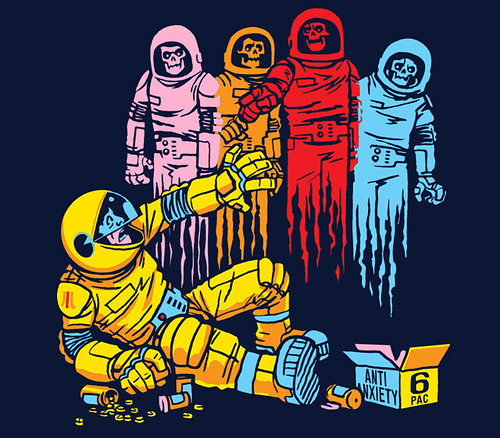 The thing that bugs me about the Park51 situation is that it is such bad propaganda. Well-- t is bad civil rights, of course, but those people can be dismissed out of hand. People who think they shouldn't be allowed to build an Islamic Community Center can be referred to the First Amendment of the Bill of Rights. Dust off your hands & congratulate yourself on an easy quod erat demonstrandum. No, the more insidious people are the ones who say "of course I support freedom of religion, but..." Yeah, first off, anytime you say "I support freedom of X, but..." what follows is going to be you rejecting freedom of X. That is just how it goes. That being said, it is an argument, if not a good one. "Why build it there," is the summary, & a silly one. "We've arbitrarily decided that being several blocks away is too close. Sure, we support mosques even, why not build one somewhere else?" So innocent! As though saying "we got you your own drinking fountains, why aren't you happy?" or "it isn't that we dislike you, we just think you are a bad fit for the neighborhood!" is totally fine. "Hey, we're only dictating where you are allowed to worship-- worship your religion that conveniently overlaps with an ethnicity we don't like-- why won't you be considerate of our bigotry?" As though caving into the intolerance of others-- others who don't live in the neighborhood, in the borough, in the city!-- is the polite thing to do.

But really, it is the bad propaganda. Listen, I'm all for propaganda; using communication to influence behavior is the root of language. & all this is just such ridiculously bad press-- & when America should be conserving a positive image. "The Terrorists" aren't a real thing-- there are cells & movements, rather, & more specifically the latter. "Not liking America" is pretty easy for the Middle East right now. Heck, we've got two incredibly dumb wars going on. A word on that-- Iraq? Have people somehow decided that our actions in Iraq make any sense? They don't, they were appalling. Not appalling because I have some sort of moral outrage-- just because I have a reasonable outrage. If you want to go to war in the Middle East to secure assets, to toss your weight around-- well, do it like George Bush Senior. There was a bad guy-- Iraq. A victim-- Kuwait. & a good guy-- America. & the good guy went in, targeted military assets, blew up some army junk, & called themselves heroes. Whether you think they did it to control oil interests or to build an airbase in Kuwait or because America is the world police, I don't care. It was a managed engagement. The current quagmire is utter foolishness. We went in knowing it was shenanigans-- remember how everyone knew it was nonsense? We knew there were no weapons of mass destruction, because we'd looked already. Everybody had looked. & you know what? If your argument is "well, we wanted to help the people & remove the dictator," then you're even doubly screwed, because we sure as hell didn't help the people.

The problem is...well, bombs. They are great, & if you play your cards right, they minimize your own casualties. If you are an airplane far up above, or a boat far away, & you bomb (or missile) the heck out of a place...well, you don't have to report home that your soldiers were killed. They are safe & sound. & they seem so impressive. You're really doing something out there, look at all the dust & the huge crater! Take that, "The Terrorists!" Except-- well, there isn't a "terrorist country" or a "terrorist base." That isn't how it works, at all. & you can't rescue people with bombs. Rolling into Iraq to "save" them doesn't make sense-- isn't reasonable-- if you do it by blowing up everything. This isn't complicated, but I guess it bears saying: countries need infrastructure. If you blow up everything, then the country will stop working. & hey! As an added bonus, the massive civilian casualties? Their families & friends become people who hate America. & that is how terrorism is supported, how terrorists get made. Not to get all Jedi on you, but creating terror usually results in...more terror. You're only option is conventional warfare & special forces, if you want to actually achieve any goal-- any reasonable goal. Not just "save Iraq," but whatever secret mwah-ha-ha goals you might have. Unless your goal is to make money off the military-industrial complex. Hmm...musing on the corrupt nature of no-bid warcrimes aside, conventional warfare (& augmented special forces) will result in drastically higher US casualties. & that there is the rub, isn't it? Well-- I disagree. That provides a decent rubric for war! If you don't want American soldiers to die...then don't do it. Only go to war when you deem it useful, when you think it is worth the blood of soldiers.

The same thing goes for Afghanistan. Now you're probably thinking "well, at least Al-Qaeda was in Afghanistan!" & you've got a point, there. Or you would, if Al-Qaeda wasn't a couple hundred (at the most a thousand) people, scattered all over the region. Can you send a big army or a bunch of jet planes (or a bunch of robots-- the future is neat) to catch a thousand people who are totally integrated & embedded with the civilian population? No, guys. No, you can't. No, don't get me wrong-- the Taliban were a bunch of lunatics. Then again, you segued into "democracy is awesome!" mode which was a bad move, since everyone just wanted to vote the Taliban back in. Tough, isn't it, to knock over a government? Yeah. & meanwhile, what are you doing? You're accidentally blowing up schools & stuff, & while your army flails about spasmodically, the people that you are looking for just...leave. Poof. We're not talking about Keyser Soze here, though there are attempts to paint "The Terrorists" as evil genius masterminds. No-- we're talking about the equivalent of fratboys, of drop outs, of lonely masturbating geeks. "The Terrorists" aren't hardened bad asses; they are the same pathetic males who would become criminals. Who are criminals, except when you paint them as "enemy combatants." & they don't have infrastructure to blow up! The infrastructure they use to commit their crimes belong to their victims. They use our airplanes, our trains, our fertilizer. You can't bomb terror out.

What you can do is propagandize it out. Or at least, minimize it that way. We've got a tough row to hoe, since we're busy bombing countries where-- as I've mentioned-- bombs can't do any good. That sure turns a bunch of people against us. But you know what? "The American Dream" was a pretty good hedge against that. We're totally abandoning that brilliant piece of thinking, & it is a bad, bad idea. There are plenty of Americans, plenty of citizens & media outlets, who are buying into "us against them" thinking. Who are accepting the narrative of "America versus Islam." Wait a minute! The people who invented that narrative are the freaking terrorists! That is the "crazy thinking" of people who call America the "Great Satan." America has guarantees in place, like the First Amendment, that say "hey, we don't care if you think Allah is awesome, or whatever." & we've got television & money! "The American Dream" says "come on over, guys! You might end up driving a taxi or working tech support but whatever, you'll be doing it in America! & then your kids will go to college & be doctors!" & when you do stupid stuff like demonize Park51-- which is the least offensive thing in the world, which is a freaking YMCA-- you tell the people in the Middle East "ha ha ha, except you, you are just going to get bombed & like it." & that isn't helping us not make enemies. So stop, just stop-- let me appeal to your base nature, your fear & your base cunning. Lets make our propaganda better. Stop.
Collapse