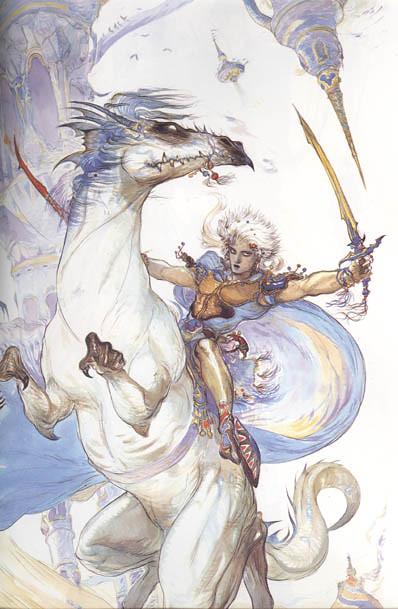 ("Dawn" by Yoshitaka Amano, via

Title represents a characters rank of nobility. Title differs from Status in that while Status represents a character's social standing, Title is a characters innate authority, which she may not be able to enforce. In Oubliette, Title is a very real thing; hereditary aristocracy is not just a social system but a true mandate. A character's rank in Title adds to his or her appropriate social rolls when dealing with supernatural creatures & translates regardless of location. An honorable samurai is treated as a samurai by devil & faeries & creatures of the spirit world, & his is recognized as a samurai even if he ends up disjointed from space & time. In that case, the samurai would add his Title to rolls made to Intimidate the devils, or the Persuade the faeries, or however best makes sense regarding each situation. It is entirely possible for a character to have a high Status but no Title, or many ranks in Title with no ranks in status. In the first case, that character may be a civic leader, a political figure, or a noble who has unjustly seized his title-- among other options. In the latter the person may be a spiritual leader, or a noble in exile, or a have only a ceremonial role. A wide range of options exist, & Title need not be based on the concept of nobility-- a character with Title could be a reincarnated religious icon, or a pivotal figure in a prophecy, or anything else appropriate.

In Anise, Title is exclusively held by Alphas.

• Knight: A knight is expected to serve as a warrior & a leader. They are the forefront of the nobility of Anise, & are expected to have sound legal knowledge so as to resolve disputes among the commoners-- they are judges as well as soldiers. Knights are the traditional cavalry of Anise, & often have a high rating in the Merit Mount.

•• Grave: The Graves are the biggest land holders, the keepers of hospitality & defenders of the land. Most Graves have a prefix before their name describing their holdings: Markgraves hold marchlands, Palgraves keep palatial estates, Burgraves have massive castles, Wildgraves have wilderness holdings, & so forth. Graves thus almost always have dots in the Haven Merit.

••• Count: Counts are the functional bureaucracy of Anise. They are also the rank of nobility with the most economic involvement; each Count has the right to mint legal currency, & is expected to do so wisely, as well as guiding the finances of the state wisely. Because of this burden, Counts tend to have high Resources Merit ratings.

•••• Duke: Each Duke of Anise is unique, & thus giving an accounting of them is impossible. Some rule strictly, while others are more spiritual leaders. Because of their high rank, & their small numbers, their inter-personal relationships become the politics of the nation of Anise; their feuds are civil wars, their marriages are treaties.

••••• Monarch: There is no Monarch of Anise. The last Monarch was the Pearl Queen, who disappeared some time ago. The Regent of Anise has been unable to dub himself King, or has chosen not to do so-- either way, the result is the same.

A Mount is a notable & important method of getting from here to there. It represents something out of the ordinary & exceptional. Any character can hire a pedicab for a quick ride through a city, or rent a horse for a long ride, but Mounts represent something more than that. A mount can be anything, from an ornithopter to a nightmare to a clockwork tiger to an intelligent giant ant. While traditional modes of transportation are interchangeable & temporary, the Mount is part of your character's narrative. A single dot might represent a well-bred horse or modified gyrocycle-- a superlative example of its type. Higher dots are increasingly useful & may well represent supernatural exemplars or devices with extraordinary capabilities-- a byakhee-like basilisk demon or a hovering flier with functional weapon systems.

On the player's character sheet, next to their Mount, the player should record a short description, much like a skill specialty, describing their Mount. Terms can range from "feline" to "fast" to "dangerous." This should be kept in mind when resolving actions. In general, a Mount adds a number of dice to the appropriate dice pools of the rider, or replacing either an Attribute or Skill, as the situation warrants. In a race, for instance, where the roll would generally be Dexterity + Athletics, a character with the Mount Merit might instead roll Dexterity + Ride + Mount. In a fight between two Mounted characters, the Storyteller might call for each to roll dice equal to their dots in Mount while the characters resolved their own action, to represent the actions of their Mounts. In addition, each player should add their Mount rank to their Tactical Movement when they are astride their beasts or machines.

In Anise, most nobles & some commoners-- especially those in high positions-- ride Destriars-- monstrous creatures that vary wildly from bloodline to bloodline. Blue Glory rides her Destriar, Herakles Vagabond, which she describes as part horse, part cat, combining the best parts of each into an affectionate but dangerous whole. Her player records "Mount •••• (hippofelis)" on her character sheet. This means she has four extra dice whenever her Storyteller agrees that Mount is appropriate to add to a roll. In addition, her Storyteller allows the scope of Herakles abilities to include "feline" like traits, such as climbing. Similarly, her friend Slumberheart's Mount Rosewater is "Mount ••••• (supernatural)" & Long Cleaver's Mount Great Thunder is "Mount ••• (devastating)".
Collapse