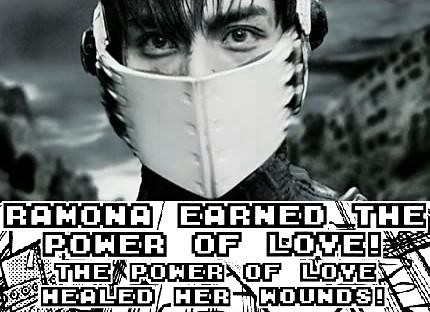 The 8-bit blitz! Yesterday kicked off with the bells of hell, a-tolling for thee. I asked! Jenny & I walked to

elladorian's apartment to meet up with them along with

kingtycoon & JR. From there we walked to the movie theater (stopping to get iced coffee, mint lemonade & granola) to see Scott Pilgrim versus the World, which was awesome. A great, great movie. I think it was faithfully adapted, well translated, & willing to abandon the source material when the source material wasn't right for the medium. & well-- I just read the last volume of the comics & I'll tell you what: I liked the ending of the movie better! I won't go into specifics, but yeah; I have mixed feelings about the ending of the film, but in the final analysis I prefer it. The book gives greater agency to Ramona Flowers-- which is important, since I have a crush on her now, & oh also because having female characters with agency is important-- but the movie fulfills Scott's arc better. Yeah, I'm conflicted, because the film just focuses on the white hetero male character, but then-- I came to the movie called Scott Pilgrim versus the World, you know? Anyhow; that is the point of the film most worthy of discussion I think, though I think the part of the movie that is getting the most attention is "Michael Cera as Scott Pilgrim." Some people, like Nick Courage & Kingtycoon think Scott should have been "cooler" but I think Cera hit it; he was not just doing the same shtick, though obviously that is a facet. Everyone was perfectly cast, I think, & there are lots of easter eggs that the movie doesn't stop to explain. Thank you, emphatically thank you, for not needing to turn & wink to the camera or point out how clever you are being. The movie trusts you to "get it," which is just refreshing. We're not idiots, we came to this party knowing what we know! Of all the little nooks & crannies, my favorite is not a gaming reference, but rather that they played the Frank Black song "I Heard Ramona" the first time he sees Ramona, at the party? But they didn't play any of the lyrics-- the name Ramona was never uttered. See, I care about Frank Black, I care about Scott Pilgrim, that was a hat tip to me & those like me. If you didn't know, you wouldn't miss it. A prize in every box! So yes; I am a fan of the film. & yeah, eff the haters. It is getting slaughtered at the box office, though; well. First off, launching it against The Expendables & Eat, Pray, Love was suicide; that soaks up huge numbers of casual viewers. On the plus side, hopefully that means it will have a...what do they say? A "long tail." I think it is going to pull in viewers for weeks & weeks, & sell like gangbusters when it comes out to own. It is a perennial. Anyhow, yeah, it wet my whistle & I was a happy camper. Lets not forget that Roxy, one of Ramona's evil exes, is played by Katara's voice, from Avatar: The Last Airbender! The real one. Also, the damaged guy & the damaged girl who get it together? I'm a little vested in that.

After the movie we stopped by Union Smith to catch a bite to eat. I got a lobster roll, which was mayo'd instead of buttered, which made me sad. I should have read the menu past "lobster roll," I guess. Oh well! The waiter marked us as rubes when JR mistakenly thought a croque monsieur was Cajun, which led the waiter sort of patiently explaining things aort of condescendingly. Listen dudes, I know gruyere! I was saying it is all drippy & runny on top of the sandwich! Anyhow, I didn't want to be a know-it-all or try to explain how I wasn't an idiot, so I bit my tongue & layered my annoyance onto the black glass pit of my heart. I keep all my grudges as the soot black I forge into the iron of my bones to make steel. We got out of the diner & split up; Jenny went home & JR went to do mysterious deeds, fell & heroic ones. I have only heard that guy mentioned by Antonio & Kingtycoon before; he seems an alright sort. We went up to David & Maggie's apartment for a little while then, drank coffee & watched Aliens. The plans were to go see Nick & Rachel Rabbit, but we had to wait for them to confirm! Maggie seemed pretty darn sleepy (David too!), so as soon as the was an opening, we took it. Boom! We were out of there. Goodnight, Moon! To Nick & Rachel's place in Williamsburg. We enjoyed their hospitality & Red Stripe Lite! & quinoa & spinach & chickpeas & tomatoes & fake chicken. It was nice to see them, but sad that they didn't come to the show! See, because then we went to see The Protomen.

comeuppances & Rachel & Will-- those who thought about coming & didn't? You choose...poorly. You were unwise!

We met up with Edbury & John outside The Knitting Factory, & went on in. I had twisted Kingtycoon's arm to come, a little-- I think he expected the Protomen to be a bunch of guys who cover the Mega Man 8-bit soundtrack? Nay. The opening act was Makeup & Vanity Set. I only have heard his Protoman covers, but it was an okay time! Kilroy of the Protomen was hyping for him, got a conga line going, & a breakdance circle. Fun. I don't think Makeup & Vanity Set's chiptunes & bitbashing really came together, except at a few places. I think a long burn, & a less rowdy crowd, would have been a better venue for it. Not complaining-- just musing! Around this point,

toughlad showed up, & Iced John. A little later, I was holding James' bag for him, found another Ice, took it & Iced him preemptively. A legal play! They book took knees like champs. The show started & was a great time. There were a crowd of boys who I was worried were going to be a problem-- single men!-- but they just wanted the music to start so they could mosh. Well, okay! The Protomen came out to riotous applause & began to play a lot of stuff off their first album. You want to know where I stand in life? I'm not interested in your mosh pit, but I'll be the guy on the edge good-naturedly shoving you back into it. Oh & you know, singing along with the music, thrashing fists, gesturing dramatically. They got into the "Act II" stuff shortly & yeah, I think that is really where the come together, if you ask me. & you know; it was the whole thing. Drummer standing on the stool hitting his cymbals, guitars on the amps, waggling their tongues while laying down sweet licks, trumpets in the back of the room when you least expect it. The Protomen put on a good show, & Brooklyn's Warriors were happy to have them. It was very "dude" heavy-- when I saw them at Santo's Party House the crowd had been pretty gender mixed, but here it was decidedly the male geek audience. Primates screeching & beating chests. Then of course that turned into the weird place of male bonding. Hugs & high fives. Kingtycoon picked up a guy & cradled him. & then of course, sadly, it ended. The cover of the night? The Protomen tend to end with a cover-- I've heard "Total Eclipse of the Heart" & "I Drove All Night" & tonight they served up a heaping helping of "Mr. Roboto." Domo alligator, crocodile! Then we all had our ranks upgraded to "Battletoads" which is a rank above "Double Dragons" but below "Mutant Turtles." & hey, I caught the broken drumstick. Caught, caught, as in, in my hands-- I wouldn't scramble for one. After that, we piled onto the G train & split our ways-- Kingtycoon into the night, then me. Poof! Home & in bed by 12:30; not too bad! Oh & open letter to the two fathers who brought their four 8-11 year olds? Good looking out. Your kids are lucky to have cool dads.

The Protomen: Intro / Funeral for a Son from Emma Story on Vimeo.