Huey Lewis sang:
"thats the power of love!" Yeah!
It saved McFly, too.

The previous Scott Pilgrim was a major downer, which hit even harder than usual because the first four volumes were such an upward joy-ride. Like a roller-coaster, the plunge was quick & merciless. This volume participates in the slump for the first half, but starts accelerating when Scott meets his Nega-Clone; once Scott is riding on the top of a bus, cape coat fluttering in the wind, you know things just got real. Still, this isn't my favorite volume of the series. First, before I tell you why, let me say that it didn't dim the shine of the over-all series at all. & in fact, read all in one blitz the emotional arc probably reads a lot less jarringly then when you are waiting for new volumes to be released. With those disclaimers in mind? I think it dwells far to much in the mythology of Scott Pilgrim. Part of the one-two punch of the series is the fact that it is mostly a hipster indie comic...except suddenly video gamesque fights break out. When the whole thing becomes a solid battle royale, the impact starts to dissolve. & I don't need you to tell me what the lines over Ramona's head are! I don't need you to break down that, or what Gideon is up to. You built from the archetypes, that is the strength of the story. I don't need mechanics & exposition. & you know what, the first half of this volume wasn't needed. It wasn't. Yes, Scott was a total prick, a terrible boyfriend, a cheater, a slacker, a manchild. Yeah, it is the book about shaking off being a manchild-- which I guess I'm bored of. Seriously, menchildren, knock it off, you are disgusting. Anyhow, I thought ...Versus the Universe drove home that point enough; I didn't mind the revisiting of the past flames, but I would have liked Scott to have started progressing by the start of this book. I did think his use of panel flow & art has really gotten tight;this is the best book, visually, & O'Malley's skill with using the space lets him do whacky things without losing the reader. Probably the best thing about this is Ramona's sense of agency. Ramona is great, & eventually Scott is great, & finally. Jeez it is about time. I'm a sucker; I'm an old married guy. I think there is totally room for more Scott Pilgrim & Ramona stories. Seriously, once the romantic leads get together, the story gets way better, take it from one who knows. Ew, gross, did I just say that? I don't even care! Oh & hey, did you see my avatar for the Pilgrimverse? & in the end, I guess the moral here is: I really home there is an omnibus that I can buy. I just assume there will be. Right...right? 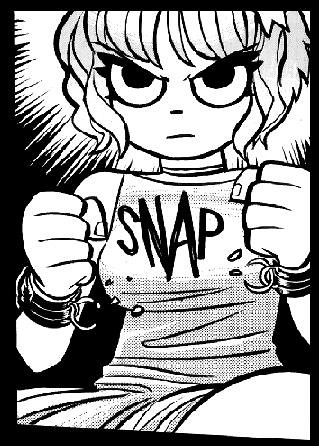