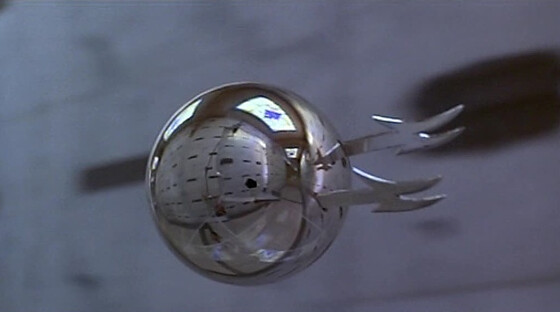 Here is how it goes. Last game my players, especially

toughlad & Tom, were talking about Phantasm & how great it was, & how scary they found the Murder Ball to be. "I can make that happen," says their Narrator-- which would be me. Now, I'm prone to making vaguely threatening overtures as the Storyteller-- "oh ho ho! The bad guys roll is just amazing!"-- so I'm sure they brushed it off. Nay! I went home & watched Phantasm, so I could at least do some justice to this haunter of childhoods. Oh you want a Murder Ball, scarecrow? Have some! I am pretty pleased with myself; I think it worked in very nicely, & the Players certainly responded to it. Well, lets back up! So, the game yesterday was fun, but I was tired & cranky, so it ran short. I was ready to sleep off David's birthday & some of the other customers were tuckered out too, so it ended up being a good fit in the final analysis. We split a bacon & pineapple pizza & it hit the spot; it was just what I wanted & I didn't know it till I ate it. Anyway: on with the show!

The adventure-- "The Chase"-- started with me asking "what did you do before you left the Creche of the Red Mist?" I was trying it out-- "what did you do," rather than "what do you do," in order to keep up the episodic, in media res pacing of this campaign. Long Cleaver of a Thousand Helms & the Duke Slumbering Heart Dwells on Hill had been standing over the elevator bringing the Man in Black to the surface, & when his "flying machine" (I tried hard not to say "hover bike") took off, they were braced enough not to be knocked over by the back-blast. Slumberheart caught the "eye" of the Man in Black through his opaque visor (Composure + Intimidate), while Curie took the moment to figure out as much of the hovering machine as possible (Wits + Theosophy), while Long Cleaver noted details about the Man in Black-- no insignia, no signature style, a very slim sword, a bump at his hip (Wits + Investigation). (Out of game detail worth noting--at this point in the game, Tracey was busy with work stuff & on autopilot). With that, the party mount their fearsome destriars-- the juggernaut Great Thunder on the Plains, the sleek & predatory Herakles Vagabond, the enigmatic & magical White Bodhisattva Anointed by Rosewater &...Curie's rented horse. The "derro"-- Sam can't remember the term "Demi" off the top of his head, brain stuck on "Derro" & I encourage the linguistic hiccup-- Fen Dweller mounts one of the toothsome dire wolves & rides ahead of the group, taking them through the fungal forest, up the tree root labyrinth, out through the red mist, snapping at the Man in Black's heels, so to speak. 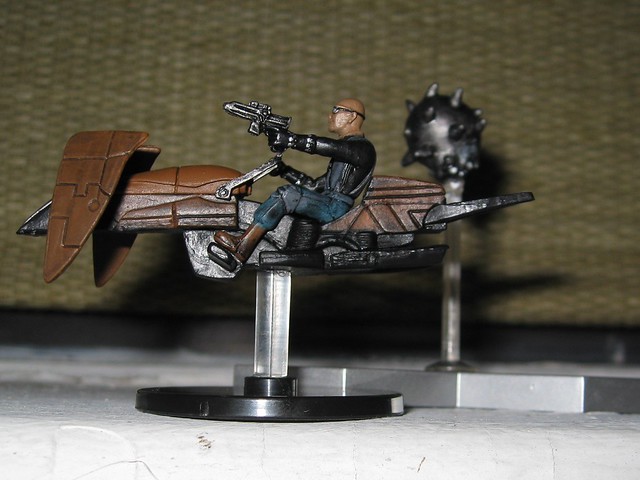 (The Man in Black & Murder Ball Minis; "Dark Hellion Marauder on Swoop Bike" & home-mod by me.)

The Chase begins in earnest, a midnight race all across the landscape of Swansea County! Swansea is a lowland, filled with crystal clear ponds & huge stands of bamboo-- so thick & prevalent that roads must be cut through the forests of it. The ponds, which are so common that the roads will just go across the shallower ones for convenience, are filled with singing swans & black koi nibbling at the surface. The swans really do sing, like humpback whales almost, rising up into the sky indignantly as the flying machine comes through, along with the stampeding pack of destriars. The players urge their mounts forward (electing for Presence + Ride + Mount; an somewhat odd choice but acceptable). As the players maneuver closer, gaining on the Man in Black as he veers around the bigger clumps of fallen bamboo which the Player's destriars naturally avoid, he draws his bone white & willow wand slim sword, swinging it in a figure eight, lopping the bamboo off in a cascade of fallen logs (anyone who has seen a Japanese film with sword fighting knows what I mean). Long Cleaver & the massive Great Thunder smash through & the others & their mounts come through ducking & dodging. The Man in Black takes a sudden hairpin turn, skittering across a larger pond through the thickets of bamboo, & the party follows. The Duke on his destriar Rosewater-- & Long Cleaver, who jumps from the back of his mount to Rosewater's back!-- dance across the surface like a lizard, like a messiah. Curie tries to swim across with his horse, but looses the reigns, drifts off his horse's back. & the horse doesn't stop! Because what is that? Why-- a black koi grown big enough to be the size of an alligator! "Help! Ets gonna eet meh!" he brogues, but the Duke-- grim of demeanor-- doesn't consider stopping for a moment. "Do what you want," he says, to Long Cleaver-- who is wearing full plate & moving at full gallop. Long Cleaver elects to stay with his liege rather than drown to death. Is all lost? Nay! For Tracey looks up from her lap-top! "Blue Glory would do something." Snap! Like that, Blue Glory's destriar Heracles Vagabond snaps up the koi-- giant feline monster eats giant fish monster, that seems fair.

Which is when the Man in Black breaks out the Murder Ball. He noticed The Duke before, when he caught his eye, & he gives him a literal second glance-- flicking his wrist & tossing a softball sized silver sphere into the air. The sphere hums like a nightmare science fiction movie, streaking right at Slumberheart-- & Long Cleaver leaps off the back of Rosewater with his nodachi, clobbering it! Here there is maneuvering-- Blue Glory & Curie shepherd the vicious Great Thunder along-- while Duke Slumberheart implacably chases the Man in Black & Long Cleaver tries to slice the Murder Ball into pieces. Curie winds his PAC emitter-- his lightning gun-- & Blue Glory waits for a golden opportunity. The Duke, astride Rosewater, manages to pull ahead of The Man in Black, turning sideways & staring him down in a game of chicken. There is a contest of wills (Resolve + Intimidate versus Whatever the Man in Black Rolled) & it doesn't result in any obvious victor-- at the last moment the Man in Black's machine leaps over Slumberheart, who scrapes the bottom of of the device with his broken sword. Meanwhile-- Curie makes a wild effort to over-charge his lightning gun & zap the Kill Sphere (offering to roll a Chance Die-- I like those!) & his weapons backfires, jolting him, knocking him off his horse & giving him a hell of a blast (he rolled a 1). Blue Glory scoops him up as-- the Murder Ball plunges into the Duke's destriar's flank! Rosewater gives a moan like a foghorn, low & mournful. & like that, the Man in Black speeds off, into Almond County, home of baobabs & the Banyan Palace. Day breaks, & the party rests, playing with the leaking goo from the flying machine, killing goats (who live in the branches of the baobabs) to feed their mounts. 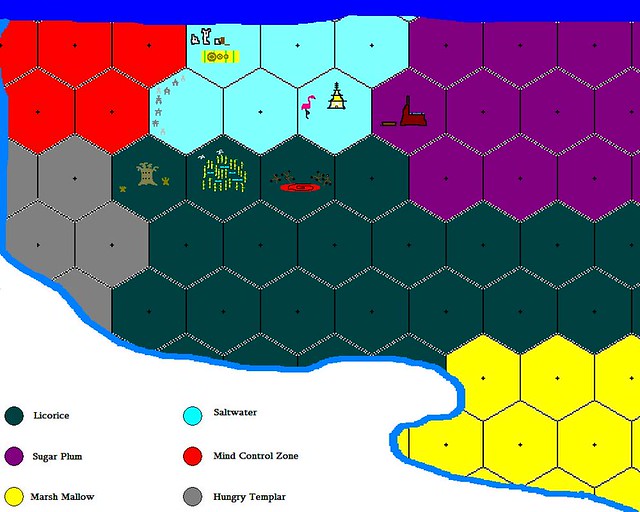 Packing for Mars by Mary Roach.

The saloon sign says:
"even spacemen get the blues."
The grey moon dust blows.

Mary Roach wins a big chunk of slack from me just by calling herself a "humorist." See, I like my non-fiction on the more academic side of the trade/academic divide. Pop science is fine, but at some point I want to see annotations, bibliographies, & studies, rather than "scientists say..." Well! Miz Roach hits us with foot-loose footnotes, & a heaping helping of sources. See, she may be a humorist, but she's a journalist as well, & a dang well read one at that. So when she can't cite a paper or experiment-- & she usually can, if she brings up the topic-- she can cite a person, the actual human being she talked to about the information. She gets a lot of points just for that, for due diligence. Can you believe this is the first book of hers I've read? For all that I took forensics classes in college-- maybe because I did?-- I've avoided Stiff so far. Maybe I'll actually consider reading that, since I enjoyed this. About this? I feel like the "bang" is in the scatological; the book has gotten a lot of attention about her coverage of space toilets. That chapter is buried in the back, antepenultimate, but it is riveting, sort of like a car crash. There are just such a load of cultural taboos, & outer space just doesn't give a damn about your quaint notions of culture (or, ultimately, even Culture). I think she first had me when she off-handedly references that the real reason the cosmonauts had a pistol in their gear was because a capsule had once been attacked by hungry wolves (68). Oh outer space, oh Russian space program! Swoon. There is a bunch of talk about spacesuits, specifically about the David Clark Company, which reminded me of the book Spacesuits (250). Which soon segued into a discussion of a man who survived an SR-71 disintegrating around him at Mach 3.2 (257). Roach's strong suits are the anecdotes-- the footnote of how Muslims pray to Mecca in space, that sort of thing (292). There is also the fact that she's a sport. She'll drink her own purified urine for the sake of the story (311). That is hardcore. Colour me convinced. There is a part at the close which summarized my opinions on the space program better than my own rambling musing otherwise might. She brings up Ben Franklin's viewing of a manned balloon mission, after which he's asked what use it could possibly have. Franklin, that wit, replied "[w]hat is the use of a newborn child?" Apt, Benjamin, on point as usual. Or as Roach puts it: "Yes, the money could be better spent on Earth. But would it? Since when has money saved by government redlining been spent on education & cancer research? It is always squandered. Let's squander some on Mars."
Collapse