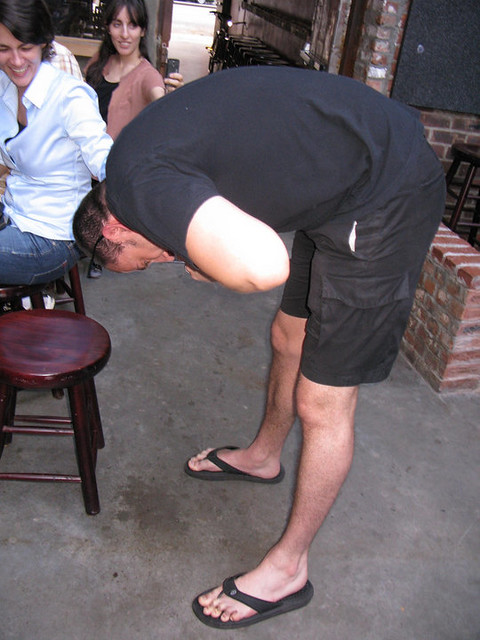 Oof. I may have over indulged yesterday at

fordmadoxfraud's birthday. Slightly. I don't really get "sloshed" any more, so when I do I particularly notice. The irony is-- just that morning I had been congratulation myself on not drinking so much lately-- hey, your body chemistry can get to an equilibrium when you don't flood it with poisons! So much for that, though. Still, David's party was a lot of fun; the venue was Mission Dolores, which is a really odd space. There is a room, then a courtyard, then another room. Their tag line is "That weird beer bar at 4th & Carroll." Anyhow, I...really liked it! There were pitches of water, for one thing. Jenny teases me because I drink a lot of water & thus judge locations based on ease of access to it. The waiter at Blue Hill commented about it, even. Anyhow, besides the water, & the interesting space, it also was home to a host of microbrews & other such fancy beers. Hence, my over-indulging. Again, though, I think the best on their draft list was the Captain Lawrence Imperial Porter that we had at Beer Table. You know, the Rodenbach Grand Cru that Jenny got was also really excellent. It was tart, like the Cantillon Iris we had on vacation but way more interesting. The 21st Amendment Back in Black was also a contender, just for being so gosh darn weird. Anyhow, much of the clan showed up for the day; David & Maggie & me & Jenny, obviously, but also Will, John, James, Lilly, James, & David's family; Christine, Rico, Katie, Kevin & John. Also, dogs! Roscoe was there for a while, & he met Archie, but eventually they both went home. I got hiccups, & got rid of them by drinking upside-down from a glass (per the above photo). I fully agree with the sentiment that "hiccup remedies" are just excuses to make your friends do stupid stuff, but I'm a sport! I'll do my part to play the fool when the scene requires it! Anyhow, I drank too much. I mean-- not get sick "too much" but "fall asleep in the middle of the day" too much. Jenny deserves a gold medal for putting up with me on the best of days! Anyhow, in the middle of the night I woke up because a centipede was crawling on my arm! & I had dreams about Alice; her girlfriend had died, & been really rich. In her giant apartment there was a thing like a giant eight-pall, where lines of poetry kept being displayed & then rotated. Eventually I figured out that the poems were tattoos, & that Alice's dead girlfriend had been embalmed & was in the poetry-device. I spent the morning kind of miserable, but I'm shaking it off. Nose, get thee to the grindstone! On the side, I think the link between Dormammu & The Hood is the first time in a long time that Dormammu has been scary.
Collapse