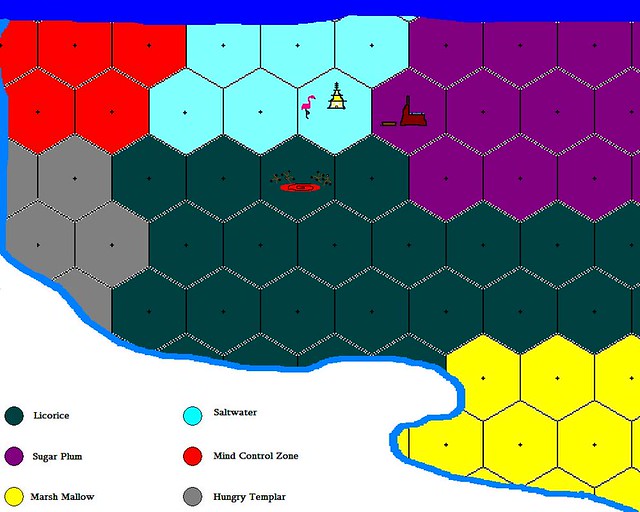 Once upon a time, Anise was part of a greater, fragmented Kingdom; the lands known now as Arioch, the Enclave, Triumph, & the homelands of the Peacock Lamas. In a time before that, all the lands were part of a greater Empire, uniting all the world (at least, so it is said), but those days have been forgotten. The last monarch of the Kingdom was The Pearl Queen (& before her, The Ship King); The Pearl Queen one day disappeared, & that is where we will start our over-view around that time, if not slightly before.

~70 years ago: The Licorice Duke, Black Bear in Black Cedars, kills his wife The Sugar Plum Duchess, My Dear Wormwood, for bearing a child that was a Beta-- half Alpha, half Human-- showing that she had been unfaithful. The Licorice Duke is "Thorned"-- given over to his darker impulses. The political ramifications are dire, most notably allowing the enfranchisement of the Sugar Plum "Barons"-- non-Alpha, non-noble plutocrats that have arisen as an economic power. They previously have maneuvered themselves in the Sugar Plum Duchy as a sort of financial & parliamentary body; upon the death of the Duchess, with no clear air, the delay & filibuster any attempt to recognize a new Sugar Plum Duke. With no heir, the Sugar Plum Barons form an ex tempore government of the Duchy-- a situation that soon becomes permanent.

~60 years ago: The Pearl Queen fails to arrive for her usual appointments in Anise. In retrospect, this marks the start of her disappearance. The Licorice Duke chafes under her disappearance, itching to expand his sphere of control, & makes several exploratory forays into neighboring Duchies. The Saltwater Duke, Slumbering Heart Dwells on Hill, keeps him in check, & is faithful for the return of the Pearl Queen. In the Queen's absence, the Sugar Plum Barons dig in their heels, becoming ever more entrenched.

~50 years ago: The Civil War. The Licorice Duke goes to war with the Saltwater Duke & the Marsh Mallow Duchess, True Love Waits. The Spice Drop Duchess, Sweet Ballet Macabre, who is the ancestral & nominal ruler of Anise's elite military corps The Hungry Templars, stays neutral, focusing on keeping the borders safe. Not long after the start of the Civil War, The Licorice Duke slays the Marsh Mallow Duchess, True Love Waits, in single combat. Her sister, the young Rise Up With Fists, is confirmed as her heir & takes her place in the war alongside The Saltwater Duke. The Sugar Plum Barons remain impartial but are ever eager to loan money to the war efforts, as well as provide new & terrible weapons of war, such as thermal lances & muskets.

~30 years ago: The Licorice Duke is brought back to his Petal nature, becoming a force of generosity & wisdom in the land. The royal rumor mill attributes this to his new concubine, Thoreau Twilight, from the nation to the south, Aubade. She woos him with story after story, before he can vent his murderous rage upon her, till at last his jealousy & anger is slaked & he emerges as a new man. Also notable, the birth of the Licorice Duke's heir, Black Jaguar on Bright Water (the birth of the Duke's most notable bastard, the Beta Blue Glory on Dark Water, doesn't come until a decade later, conceived with The Licorice Duke's favored Human concubine Thoreau Twilight).

~10 years ago: Antiphon, full swelled after a population boom, pushes across the river Big A into Anise. The Hungry Templars go to war with them. There are horror stories of Antiphon's soldiers; they fight alongside demons, with unholy spells writ upon their flesh. The golden seals of Antiphon & zealous fervor of their soldiers are a dark threat, but ultimately no match for the discipline, cavalry tactics, & brutality of the Hungry Templars. A young soldier named Long Cleaver of a Thousand Helms finds himself thrust into a central role with his unit the Haax Karls, winning fame & glory across Anise.
Collapse