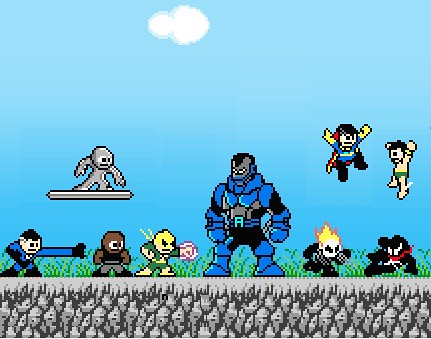 Got over my malaise eventually! Freyja's day was a weird one; the culmination of the week's meetings at the office; dusted my fists off & then still had more workaday chores to take care of. It was meant to be a half-day, but I worked the whole day & will just take next week's Freyja's day off completely. A little lateral thinking, don't mind if I do! Met up with Jenny outside the Daily Bugle & we walked down to grab some fancy macaroni & cheese at S'mac. We had the Mediterranean, all goat cheesey & olivey & spinachy; also the Masala which was cilantroy & curried & you know, vaguely Southeast Asiany. Both were good! Jenny took the leftovers for work the next day. Came home sort of punchdrunk on carbs & tried to go to the gym. I did try! I ended up putting in 45 minutes before deciding that pushing it with a rock of noodles in my guts wasn't worth it. Came home & went to play more Mega Man 10 & Jenny was like "how many times are you going to beat that?" Well the answer is a million more, or until Mega Man 11 comes out, but it spurred me to download a new game. I selected...Final Fantasy Crystal Chronicles: My Life as a Darklord (光と闇の姫君と世界征服の塔 ファイナルファンタジー・クリスタルクロニクル). Sorry; I've been tweeting in Japanese a little to Chikako, so I've got kana on the brain. My Life as a Darklord is a "tower defense" game; the basic premise is that you are an Evil Princess in a Black Tower, & you have to build traps & summon monsters to defend the Dark Crystal from heroes, adventurers, & other goodniks. It is actually pretty fun; also, I have decided that as Moogles are to the good guys, so should Tonberries be to the bad guys. I don't know if anyone understands how much I like Tonberries. You have a stuffed Tonburry golem named Tonbetty! So-- that game is pretty fun, & I ended up playing it all this morning, too. I meant to watch the TMNT Teenage Mutant Ninja Turtles cgi film; I got a ways in & took a break to play more My Life as a Darklord & ran into a bunch of trouble; a hard level I had to try a bunch of times before finally beating. Don't worry, TMNT, I'll be back; I'm a Turtles fan & plus, it was the last film Mako ever made. Brave soldier boy...comes marching home. I did succeed in going to the gym though, & did a nice bit of work there. Feeling a little bit better about my attendance; I need to get back into the habit.
Collapse