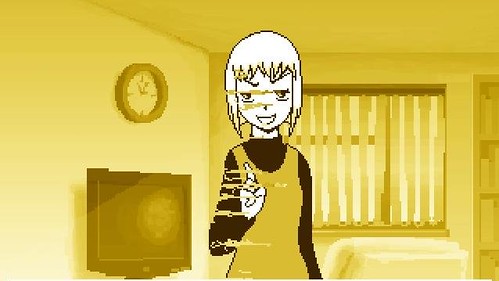 I've been playing the casual games that

fordmadoxfraud has been sharing on Google Reader, & they are pretty fun. The one pictured above is Air Pressure & I guess it is a response to dating sims? Since it is a break-up simulation. That one, whatever. The use of de-resolution is the only interesting thing about it; otherwise it is...well, I don't want to say it's emotional voice is flat & affectless, because I'm guessing it does ring true? I just can't be bothered to empathize with terrible people. Upgrade Complete is a little more fun, but it too is trying to be..."teachable." Or has a gotcha. I mean, the gotcha is pretty obvious, but whatever. Like David, I still unlocked every upgrade, still followed the breadcrumbs to the gingerbread castle, so to speak. Sort of fulfilling, even if it isn't supposed to be. Like scratching a mosquito bite. Anyhow, Progess Quest made the same point, better. I like to think my Dung Elf Shiv-Knight is still out there, leveling up & gold farming. Of the "games" that I played though, Choice of Broadsides is the most fun & charming. I hesitate to call it a game, since it is rather more a meta-text, but then, we're hitting that point Roger Ebert is too dumb to notice. Games are meta-text, they are narrative explorations. Anyhow, Choice of Broadsides is a "Choose Your Own Adventure" story, but with character stats. All of the games are relatively entertaining; that is the thing about casual games. They are a lot of fun. Heck, I still go back & play Give Up Robot every so often, or knock off some Canabalt. I'm sad not to see the artistry in all the games, but then it only makes me more excited for things like Small Worlds. Casual games; just little widgets, little things to try to wiggle your brain into-- that is fine. It is just transcendental when someone weds a real story to it, without being preachy. & of course, watching meta-fiction & hyper-text become de rigor is hilarious; it is like watching stuff that was "hot" in college become a real deal. For my money though, you'd be hard pressed to find the interplay of game & narrative, of author & audience, spooled out any better than MSPaintAdventures.

Last night was nice; I lazed around the apartment for a while, unlocking some more Mega Man 10 stuff. I got "NO COFFEE BREAK" yesterday & will try to get "WORLD WARRIOR" today. Eventually I went back into Manhattan to have dinner at Dojos with

onatopofthings & a bunch of friends: Amy & Omry arranged it & Brian & Jocelyn threw their hat in the ring at the last minute. Brian got the hijiki-tofu on my recommendation, which was gratifying; when someone takes a recommendation on your say-so even though it represents stepping out on a limb somewhat. & of course he was rewarded, because the hijiki-tofu is utterly delicious. No duh that is what I ordered; I've long gotten over trying to diversify at Dojos. Sure, there are other good dishes, but then I have eaters remorse for the hijiki-tofu. I also had some unfiltered sake-- it was the brand i assumed it would be, & it was cheap. I mean, the mark-up was only a dollar from the liquor store. Which shouldn't be surprising, because Dojos is the cheapest restaurant I've ever been to. We all split up afterward; Omry rode his bike so I headed home with Amy. Only to be kidnapped into shopping at Crate & Barrel. Amy tried to act like we were just popping our head in, but I know better! Actually, we were only in there for a few minutes. We took the B train home, switching at DeKalb. I always forget you can do that, I don't know how the B runs. The B, huh? Anyhow, Amy & I played "What monster do you like?" with the RPG books I had & then she busted out her fashion mag & played "what outfit do you like?" with me. Also, I disabused her of the notion that I play roleplaying games on the computer. Then, home-- the games, as per above. Jenny was at a work party, & she came home eventually; since I was hip deep in bits & bytes, I didn't jump all over her, gave her a chance to decompress. We split half a bottle of wine, & tucked in to bed. Now here I am; I've been sitting in the dark for a few hours, which is a thing I like to do. Made coffee, & am just waiting for my top lady to rub the sand from her eyes.

The ship was empty.
We combed its holds for treasure.
Engineer & eggs.

I admired Classic Monsters Revisited when it came out, & I'm happy to see that the lineage is being proudly carried on. The basic premise of the "Revisited" series is: there are some monsters that are just...sort of silly. Or maybe the monster is played out. Bela Lugosi's Dracula may be a cornerstone to the vampire mythos, but having a Eastern European accent & making double entendres about not drinking...wine are not going to inspire fear & awe in your players, & really, if you are bringing out the big guns, the full capital V vampire...you want them to be afraid. Are your players burnt out on zombie hordes? You might want to consider spicing them up! Similarly, there are things like the Mimic & the Gelatinous Cube that have been the object of ridicule for quite some time. Some monsters, like the humble goblin or ogre, are taken for granted. Well, Paizo isn't having that. They take the icons & reframe them, giving them plausible or colourful back histories & options, as the case may warrant. The best thing I can say about these books is the simple truth: they gave me ideas. You read these books & I'm sure your take-away will be different than mine, & that is the brilliance of it. There are hooks a-plenty. Do the exploding skeletons tickle your fancy? "Tarnished" metallic dragons? Purple worms that gain a horrid form of sentience by consuming one too many magic items? With a little wiggling, a little paradigm tilt, suddenly the "mundane" (if you can call a flying manta ray that looks like a cape mundane) becomes brand new & sparkly. Did I say sparkly? Maybe a poor choice of words, considering I was just talking about the reinvention of the vampire...

The best of the Classic Horrors are the derro, I think. I have always been a derro fan, & unsurprisingly a lot of what I have thought about derro overlaps with what the folks at Paizo whip up. Derro have influenced Oubliette's Demi-- from their portrayal as "knockers" all the way down. I'm not surprised to see "The Shaver Mysteries" referenced, as that was something I found intriguing; nor was it shocking to see them sort of get the "alien abduction" vibe. Heck, it just feels right, & to me too. I was happy not to see one of my thoughts were original-- they don't come out & say "think of them as the caveman version of grey aliens," so at least I have an original bone in my body, yet. I will say too that the brooding flesh golem here is an idea definitely worth thinking on. Of the Dungeon Denizens, colour me a fan of the cloaker. I've always liked the guys, & making them a strange cast off creation of the aboleths is the right way to go-- you may note here that I am a longtime aboleth fan. Making the cloakers a species that find the malevolent disinterest of the Lovecraftian "gods" to be a comfort is a feat, but the book manages it. You know, the glue pit of spores that a mimic lays & the apotheosis of the species into an aberrant humanity-- they're close seconds, too. Shapeshifters always make me think of Gene Wolfe's inhumi-- if you've got shapeshifting aliens, then you don't need anything else. They can run the gamut, for you. You should so very easily just have your dopplegangers & mimics & all that as just one thing. As for the Dragons, well. You know what? All the writing is well & good, but it was Ben Wootten's art that seized my imagination the most-- particularly his black & white dragons. The Manx Loaghtan-like horns on the black & the pinions on the white are just...well, bringing something new to the table, visually. 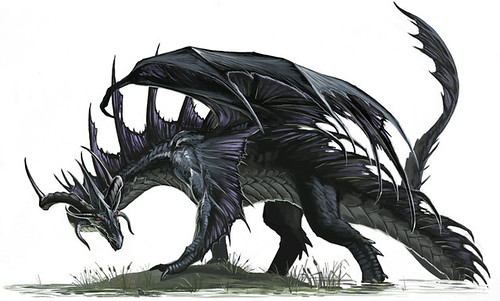 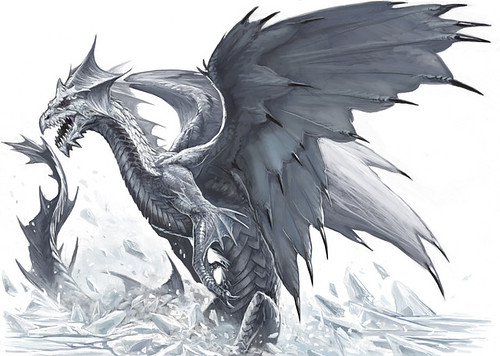