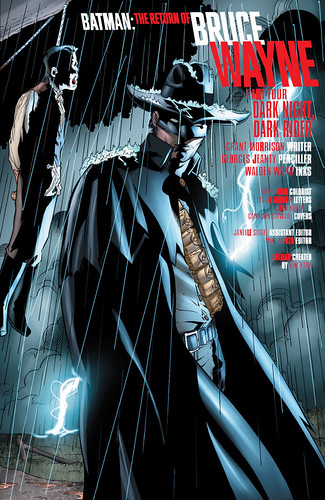 Here is what I've been thinking: I've been thinking we retrofit reality to say Superman's costume is portrayed in blue & red because he's supposed to be hyper-real. Comic artists made him blue & red so that when you read Superman comics, he'd be the only one in 3d, he's be more real than anyone else. That is what I think; & that maybe if you made a modern Superman comic, you'd want to use that trick of stroboscopic motion, lenticular printing. You know, where depending on the angle you look at the image, you see a different image. Superman should be in alternating blue & red, his "S" snaking in the shield like a bolt of lightning. Because...well gosh, because he's Superman. & lets not neglect Batman. I was thinking about Lex Luthor-- if you haven't seen this comic book trailer do that right away; then watch the one for Starcraft II & then this Star Wars: The Old republic trailer-- & how he might see the world. I think he's got to be smart, but a whole different kind of smart. I think he needs to be inhumanly smart. Not "smart guy" smart, but "psychohistory" smart. He should be running through possible futures in his head at all times. & I wondered: what does a guy like that think about Batman? Well, I figure probably something like "you know, a dog can follow tracks, scents, all kind of signs a human will miss. They are amazing detectives, dogs." You know, hubris. Don't get me wrong; I think Luthor might trump Batman, the same as I think The Joker beats Superman. Too bad Wonder Woman doesn't have a nemesis-- sorry, Cheetah! Rock, paper, scissors. Plus, that means Superman & Batman are doing to most good, paired with the villains they can keep in check.

Yesterday I went to Ippudo for lunch with Hello Amy & in the bargain bumped into my dude Alex. I kind of thought that it was the place I'd bumped into Alex before, but I wasn't sure when Amy recommended it, & didn't have a confirmation until I got there. Anyhow, I had what Alex told me to get, the ramen with pork belly, & yeah, dang! I was full of salty noodles & pig meats. Amy & I talked about maids & whatever; we played catch up. The wait was pretty long-- I guess it is popular-- but Amy was wise to select the joint. Gochisousamadeshita ne. Then I came home & played even more Mega Man 10. I am beating it on easy with Proto Man; I'm a bit of a hammer when it comes to that game; I endure hits that I could have tried harder to avoid. Hopefully playing the more fragile but more agile Proto Man will up my game. You know, for competitive play. Anyhow, it was Television Night!

onatopofthings was first to the plate, followed by Jenny & then

elladorian. We spent a while...chatting. Bunch of squawkboxes! I don't even know what we talked about. Ryan bought some classy wine with a picture of a devil on it, which was dang nice. We ended up watching the first episode of Jekyll, which was pretty okay. A strong cold open. Also, you know I like me some Edward Hyde. Then, to bed! I had dreams about a literal suicide girl. A girl with a shaved head who at first was holding some hostages, till I wrestled the gun away from her. Then I chased her around on roof tops. It was fun & bittersweet.
Collapse