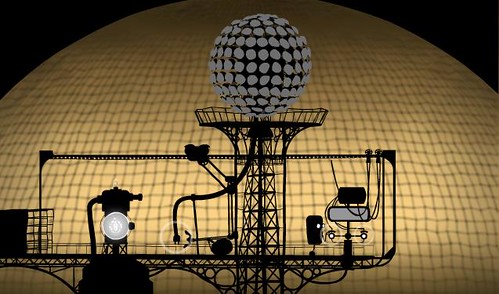 Gosh, I'm in an odd mood today; all easily distracted & excitable for no reason. Maybe I drank too much coffee. Yesterday was the CSA pick-up, & we struck the mother lode. Seriously, I called Jenny to come meet me as I carried the stuff home, there was so much of it. Like last time, Jenny ordered meats & things, which resulting in a no joke treasure trove. Tons of ears of corn, beets, cabbage, tomatoes, fennel, basil, squashes, four pounds of peaches, just oodles-- or I guess I should say "bushels?"-- of vegetables, along with a huge slab of bacon & a roast, some eggs, goat cheese, sausage, I don't even know what else. A host of hippy chow, all hand-fed by virgins, all with secret names & golden fleeces. Once we'd dragged out massive loot home I fiddled around for a bit & headed out to the gym. Not too shabby a work-out, since the heat is a little less oppressive; the gym is air conditioned but lately the weather has been aggressive, & I've been sweating bullets. I still didn't really push myself too much; I put in an hour & fifteen minutes but mostly did more of a variety pick than take the time to force another set on the same machine or exercise. That is a kind of laziness I'm a little bit tolerant on; "okay body, you did three sets of that with a pretty high weight, I guess I can give you a break by switching it up. I'll invoke 'muscle confusion' & use that as an excuse." Ran some errands afterward & then came home from that to find Jenny with a crippling head-ache; her noodle has been aching, lately. She was watching one of the Housewives... reality shows, so I grabbed the computer & tried to keep her company as best I could. Dinner was a patty of sausage between some of the farm-bread we'd bought; that, with the beetiest salad. It was a beet-greens salad, with beets, basil & goat cheese. A lot of beets; I filled my gullet with their purple blood. It was late though, what with the pick-up up & the gym & the shopping, so before too long we tucked into bed. Not before I had a few brainstorms, though-- I had been mulling over a few snarls in my game & finally found just the hook to snag into it & unravel it so I could knit some spooky genius. In the morning, I went to the bathroom & was concerned I'd like exploded a kidney or something! Before I shook off slumber & remembered my beetstravaganza.
Collapse