Everyone knows the scuttlebutt on the battle methods of the so-called "Ancient World". Heck, Rome is so deeply ingrained in the zeitgeist that even those without an interest in historical warfare will use words like "centurion." It is just there, soaking in the public eye. Which is exactly why non-Western concepts interest me so much; I've already got a decent gloss on Europe, considering the highly Eurocentric assumptions of the American mind. That being said, I don't want it to spin into Orientalism, where non-Western things become fetishized. It can be tricky; there is even the additional pitfall of trying to sort out the contemporary bias ("the Injuns killed the babies, & tortured them too!") & going too far-- effectively neutering the actual events. You don't want to present a fable of nature loving pacifists. It is a difficult line to walk, but Chris McNab does it easily & with the best tool at hand: facts. This volume presents a rough overview of "Native Americans" all while being very clear that there is no such thing, really-- there are varieties of tribes & nations living on the continent when Europeans hit. McNab separates things geographically & presents the information as a mix of trends & concrete examples. I quite enjoyed it. It is sad to think that this is also a fairly general view of Native American history post-colonialism, since warfare quickly grew to disproportionate focus. McNab doesn't shirk from pointing out the tragedies of American genocide, & he doesn't paint rose coloured picture of either side while doing it. Quite simply-- Native Americans are people, & he portrays them as such. As I said, you can get your fill of discussion on gladius length or lorica segmentata patterns; this is a nice resource for oft-neglected subjects like self-bows, arrow poisoning techniques, rawhide clubs, lances, the whole works. There is a discussion about the introduction of the horse into Native American modes of combat, maps of specific battles, autobiographical accounts from Geronimo, a whole gamut of useful things. It is all capped off with vintage photos, artwork, & illustrations-- I particularly like the painting of Lewis & Clark meeting some warriors on 197. Actually, the Tlingit section might be my favorite over-all, for that matter. The book's capstone is a brief mention of Native American's modern military service-- Navajo code-speakers & bunker busters. I definitely recommend this book to any interested party; diversifying your military research is always a good idea. 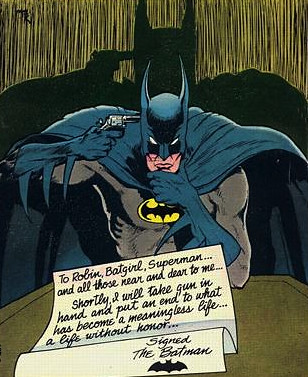 I can't say that I've...done anything, really. Not recently! I guess I could...talk about my...feelings? Except I don't really have those! Being married & all that I do gaze lovingly at my wife (think: Gollum stroking the One Ring) a whole lot, but you know. No adolescent rages of ennui, no tormented nights of nightmares. Or well, I do-- & then I snap out of it. Turambar. Sun's day I eventually gathered my skirts together & went with Jenny to Kira & Nino's with a package of beer in hand. We watched True Blood: it wasn't as good an episode as the week before's but then, that was an exceptional chunk of television. This week did succeed in making me give a damn about Lorena; she's been such a empty cape, such a propped up melodrama villain? I liked her a whole bunch the first time she appeared, in Bill's flashback to his Making, but since then she's been a giant yawn. This episode actually gave her some oomph. Besides that, Tara & Franklin continue to be amazing television-- on the walk home we discuss the difference between us liking the messed up characters & situations on True Blood & being appalled with the messed up situations & characters in Twilight. See, in Twilight you are supposed to think that the stalking & emotional abuse is part of the "perfect romance." In True Blood the stalking & abuse are fucked up. Sure, it is fiction, & fiction is a great place to explore fantasy-- sure, kidnapping isn't actually hot, but this is make-believe. That doesn't mean you should portray it as anything other than deeply disconcerting, though! Like with Romeo & Juliet; sure it is romantic, but it is a romantic tragedy. Anyhow-- I know I talk about television a lot, but I like to keep track of the art that my brain is consuming. I'd rather digest what I'm taking in than let it wash over me like waves, roughing my edges away.

Moon's day was absolutely nothing doing. I'm busy at work-- I don't know how, but I am! This is supposed to be a lull, isn't it? Not much of one. Got home to a fussy bit of Jenny. Poor darling has been having head aches. Good thing we got that fainting couch! Anyhow, eventually I went out & bought us hamburgers & onion rings. Fancy hamburgers, they'll go inside of your belly, you'll like that, won't you? I'd gone to the gym the day before-- it was hot, & my workout suffered because of it; I was sweating & so did many different machines rather than many more sets-- so I could kick back & relax. The episode of Leverage that we watched was utterly terrible. Sad! Still, that is really the first stinker I've seen from them in a long while, & the cast was charming enough to almost make it work. It started with the worst "victim" ever-- the person they were helping get payback? A guy knocked on her door, came in all smug & smarmy & basically was like "I don't have a badge or any documentation but just to let you know I bought your mortgage, muah ha ha! I am going to evict you," he said, in a creepy vaudeville voice, "unless you give me your credit card!" Then she gave it to him & he slunk out the door. Oh, what? Okay lady, you are an idiot. The rest of the episode wasn't really any better, & they had Clancey Brown! He's so great, it was a shame to waste him. Oh hey, looking at the list of episodes, it is fun to see that television's own Commander Riker, Jonathan Frakes, directs a bunch of episodes. Good for him, I knew he did a lot of directing & I'm pleased to know I enjoy it when he does it. Then with the time left in the evening I went through & I beat Mega Man 10 again, on Easy. It unlocks some content, & was...well, easy. Sort of relaxing to be able to sprint through the thing, all nigh-omnipotent.
Collapse