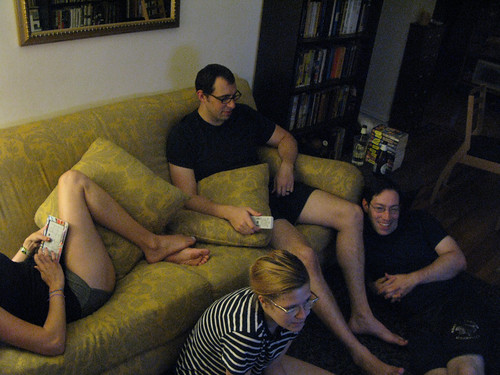 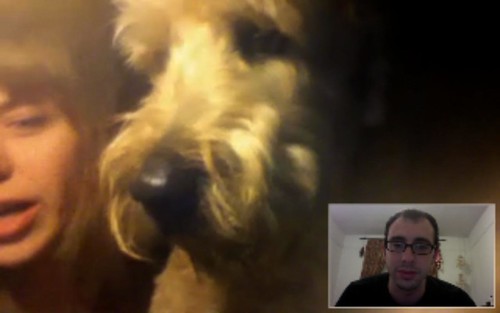 (Bare legs at TV Night by

sparrowhills & me & Rudiger by Mordicai)

What have I been up to, little black elf hiding in the chimney soot? Well, Odin's day was a celebration of the visual arts, of the motion picture! Our weekly idolatry, Television Night! I snuck out of work early to hit the gym, which is was good; I was starting to feel awful. In fact, when I'm done writing this diary entry, I'll go there again! Jenny made a very lean roast, which she was unhappy with but I liked; we had grilled corn from Rachel's Taqueria so no further labor was required.

elladorian was first to the gates, followed by

fatbutts & her dog Archie, topped off with a heaping helping of

fordmadoxfraud. Since Lilly was there, LOST was nixed, so instead we watched her suggestions-- she'd brought her Netflix'd copy of Lady in the Water! We had been talking about it at Jenny's birthday in the park; someone said it was their favorite of Shyamalan's films-- it wasn't me, though, since maybe my favorite is The Village. So, counter to our universal utter distaste for the Last Airbender film, we gave him another chance. Well, the other's did; Jenny & I saw it in theaters, & liked it. It holds up, & like I kept saying-- it should have been rated G or PG. It really is just a faerie tale, just as scary as any 80s movie with terrorpuppets. Anyhow, I find its self indulgence charming.

Yesterday after work Jenny called & wanted to meet me at Tabla for a drink. So I did! There was some talk of meeting others for drinks, but Jenny had been walking in heels all day. Instead, there was a Jenny clone! Well, Jenny said they didn't look alike. All I know is that the clone had short hair, was cute, & was flirting with me. That is pretty close! I had been in a mind for a Kachumba Kooler since Kira had a cocktail that reminded me of it when we went to Blue Hill. It still wasn't as spicy as the first one I had, though. After a drink we went to Gotham's version of TGIFridays, Heartland Brewery, which I have developed a cheesy softspot for since I went there with Ryan. Or really, for a "flight of beers." I don't know, tiny little sampler glasses! What was that Viennese place

martak took me to once? Maybe I should figure that out? Anyhow, I got a chicken wrap because I wanted one. Then home! Where I video chatted with

sparrowhills for a while on the computer & then read some comic books. Comics! Alan Moore's Neonomicon seems to be a direct sequel to The Courtyard, which I liked as a short story & even better as a comic. Otherwise-- well, some comics are good, others are mediocre. I have been passing the kid-friendly ones on to Brian for his son, as

fordmadoxfraud passes his on to me. Not Batman comics; Sherene gets those; she's on vacation so I guess she has to wait to read the two issues I hid under her keyboard. I had some others in my bag that I'd finished reading when I noticed a kid trying to peek at the cover of the one I was reading, so I divested myself of the rest onto him. That is the circle of life, Simba. Sure, they get free comics, but the first hit is always free, isn't it? Otherwise, today all I did was download a bunch of Vika Yermolyev piano covers of metal songs, on Chris's suggestion.
Collapse