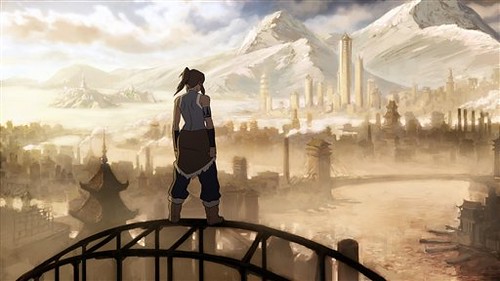 skycornerless: according to NPR, Nickelodeon has announced an Avatar: the Last Airbender sequel series for 2011. There are rumors & rumblings-- apparently it was leaked in May-- & things seem pretty loose so far. Korra is probably the Avatar, & judging by the hints, rumors, & linguistics, I'd say her being Water Tribe makes sense, which would put the story at the Avatar cycle right after Avatar Aang. Further bits & pieces state that the story is 100 years after the last one-- given the missing century element of the first series, I read that as true, & besides, 111 isn't too old for the Avatar to live, right? King Bumi did that. Korra is supposed to be a girl, & there will maybe be characters named Wei Bei & Meelo. Michael Dante DiMartino & Bryan Konietzko but nobody else has been staffed & we don't know what "involved" means-- at what level they'd be involved; hopefully fully helming the project. So, that is what is out there, right now. Maybe there will be more announced at Comic Con; that wouldn't surprise me one bit. I was just thinking about a theoretical Avatar sequel in bed with Jenny last night: I've got it on the brain after reading Avatar: The Last Airbender (The Art of the Animated Series). I was thinking about it; I did think yeah, female Avatar, or maybe an evil Avatar as the villain? Also, if I was guessing, I'd say Meelo is the polarbeardog from the original concept art-- it was strongly hinted that we'd see it again, & a polarbeardog would make sense as a polar Water Tribe creature. I was also saying-- well, when Sokka loses his Space Sword is is pretty sad, but then I cheer up! My Dungeons & Dragons background just makes me think-- oh! That way it can be treasure for another adventurer! So that is an element I hope the series grasps-- either the black sword as a sword in the stone or kept in a shrine a la Grasscutter. So anyhow, I'm hopelessly excited but also gripped by grim fear; after that disaster of a feature film (which I worry will make enough money to justify another offensive sequel) I can't help but have a twisted knot in my belly. Edit: According to the Wall Street Journal there will be a strong steampunk element & also, Aang's son.

I have been sick with laziness the last weekend. I really have been; I haven't gone to the gym at all since I've been back! Sun's day wasn't a lazy day, actually, but I didn't do anything physical, which is my point. I need some mood stabilizing endorphins! We did go to town cleaning up our apartment though; dusting the high out of the way molding was my project, as well as getting paint & supplies so Jenny could repaint a lot of the furnishings. All the while, my allergies were going berserk. I mean, just sniffles out of control. Miserable! So that put the kibosh on my gym going basically. My allergies have leveled out since then-- just a freak weekend of suffering. Eventually we got out of the apartment, picked up some beer (the Honey Moon from Blue Moon, which we didn't like at all, really) & went to Kira & Nino's apartment to watch True Blood. It was an amazing episode! Like, definately A-game material. Hypnotizing Waitress Jessica, flirting Lafayette negotiating who was a top & who was a bottom with Jesus, Eric flirting with the King of Mississippi's boyfriend-- oh man! Eric & the King of Mississippi have a great dynamic; I really like the way vampire politics is portrayed. I mean, Eric is a millennium old, the King is even older, if they went at it tooth & claw things would get dead real fast, so instead they are all old fashioned & polite with their threat displays & obsequiousness. Just grand. Bill continues to be awesome this season, but I've always been Team Bill. Of course, the show stealer was Franklin Mott. That crazy, crazy bastard. I can't help but look at vampire fiction through the prism of Vampire: the Masquerade, you know? That is the definitive portrayal for me, though I certain applaud deviation. It just remains the standard of comparison. Franklin demands that lens, since he's...well, the best thing you can say about him is "he's as crazy as a Malkavian." Someone else said he was like the son Spike & Drusilla would have had, which is also. Oh, I mean-- he's a disaster, he's deeply messed up, but it is just so dang charismatic & mesmerizing to watch him menace his kidnapped victim.

Last night I again chose the path of least resistance, which is to say doing nothing. I have been swamped at work with playing catch up & some projects & such stuff & yesterday was a bit of a non-stop clip. Not of stressful work but just constant business; like having to burn cds for two hours, for instance. When I got home I just wanted a second to arrest my forward momentum. I blogged a little bit & when I checked the clock it was 7:30; I figured that was too late, since Jenny had left her office at 7:00. It wouldn't have been fair to her to be at the gym the whole rest of the night. Also, lazy. So instead she came home & we had a nice time giggling & kissing for a second, & then I went to pick up our order from Rachel's. When I came home though, her mood had flipped! She was all cranky & grouchy. Well, we had some gin & tonics & things mellowed out a bit, & once she ate a little. We watched Leverage which continues to hit all the right notes for a pop bubblegum heist show. This was a "country western" episode starring...Bo Duke! Or is it Luke Duke? The one who was on Smallville. He was the villain, & Elliot (aka Lindsay from Angel) had to sing, which was fun. Fun, but not as fun as my mega-crush Parker dressing up as Lady Gaga slash Bjork spoof. Oh, my goodness, & the striped stockings didn't hurt any, either. After that well. Remember the resurgence of Avatar obsession? We watched the very last episode, part four of Sozen's Comet. Eff, so good. Aang is a worthy Avatar, Zuko is all bold & noble, Katara saves the day with clever & cool bending, Azula's freakout is super eerily spot-on, Sokka his every step on his emotional arc, Toph is really cool & bad-ass, it is all just so good. Then finally, eventually, I went to bed. In the middle of the night I woke up & thought it reeked of garlic-- then in the morning Jenny was like "did you smell that horrible stench?" & I was like "yeah, all that garlic!" & she was like "aw, little lamb, little dweeb, little noob! That was marijuana!" & I was like "oh yeah, duh."
Collapse