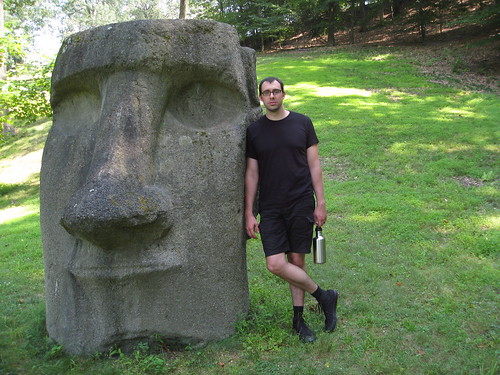 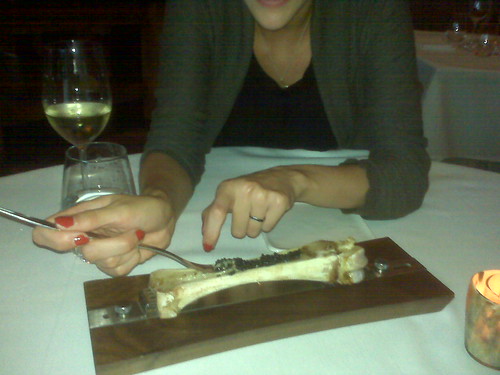 It is a little bit true when I say I don't know where to start on talking about yesterday. Yesterday was pretty awesome & I'm still in recuperation from it. I can talk about the very banal first, & then the transmundane. We finished up staying at the vacation house & cleaned up; washed the dishes & the sheets & took the garbage to the local dump. The man at the dump was very talkative: "Mordicai eh! I know some other people with funny names, let me list them for you! There is Ori, & Bori, &..." Still, that was just a few moments work. Put all of our mess away, tidied up, packed our belongings away, & said goodbye with one last swim in the pool. I got Jenny to swim underwater; that is an important survival skill, if you are trapped in a spelunking horror film, as I pretty much am sure I often am. I feel that way, at least, & what is more important than our feelings? That all settled up, all showered & tucked away, we trundled into the treacherous van to head off on the first leg of our adventure. Tra la la, Gandalf & all, to go see The Storm King! Or well, at least to go to his palace, The Storm King Art Center. 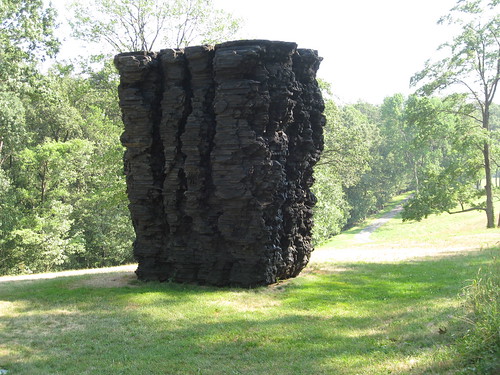 ("For Paul" by Ursula de Rydingsvard: photo by Jenny.) 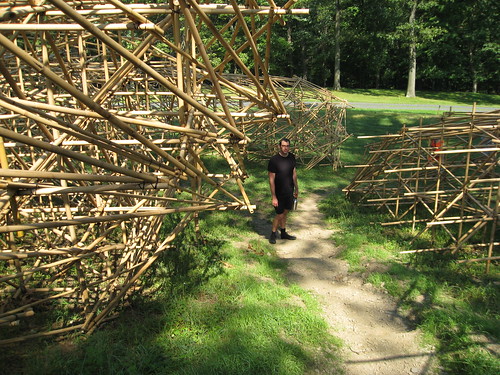 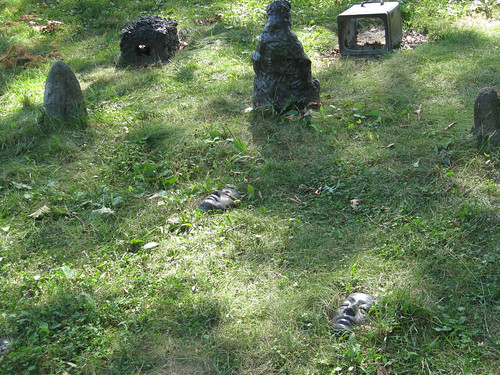 ("Waiting for UFO" by Nam June Paik : photo by Jenny.) 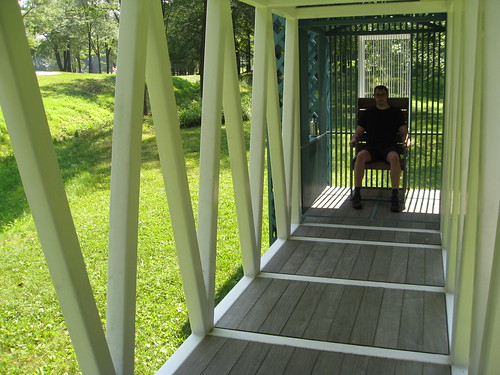 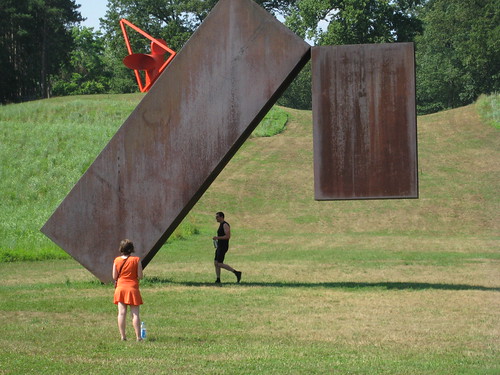 Storm King is a 500 acre park filled with sculpture. You know all those neat installation art pieces that you go to see & then go "wow, this is huge & awesome, I wonder what happens when they stop exhibiting this here?" Well-- they get sent to a farm upstate where there is plenty of room for them to run around, sheep to chase, fresh air. Storm King was seriously awesome; I mean, the circumstances blew. It was hot-- very, very hot, heatwave hot. It was sunny-- really, really sunny, after a week of being in the sun. Plus, we had plans for a fancy dinner afterward, so our sweat soaked bodies were not going to be helping. Despite these inconveniences, we had an awesome time. We were only there for two hours, & had a pregnant Kira with us, but we still put a fair piece of leg work down. I mean-- if you could see everything all in one trip, it would sort of be disappointing, anyway! Storm King wasn't disappointing in the least. Giant sculpture pieces & modern art landscape performance! By the latter I mean-- there where discs in the ground as part of a piece called "You & Me" by Maria Elena Gonzalez. You would stand on one circle & then you would look at the person standing on another-- another that was placed far away & used the art & the grounds to make odd visual effects. We only completed one, but we scrambled around looking for a few before that. I was most interested in the work of Ursula de Rydingsvard; first off, awesome name. Second off, she makes pieces that look like...corroded monoliths? Like black otherwordly cliff faces. When you get up close, though, you can see & smell them-- they are burnt cedar, riveted together with brass. I didn't touch them, since I don't want to taint the works, but they engaged your sense on a bunch of levels. It was crazy, plus...broken monoliths! That is my joint, right there. We went in the visitor center for a minute, but mostly we just did a small-scale circuit of the place. I totally want to go back, stay longer, pack a picnic lunch & make a day of it. Lets do that in the cool spring or autumn weather though. Yes, lets. 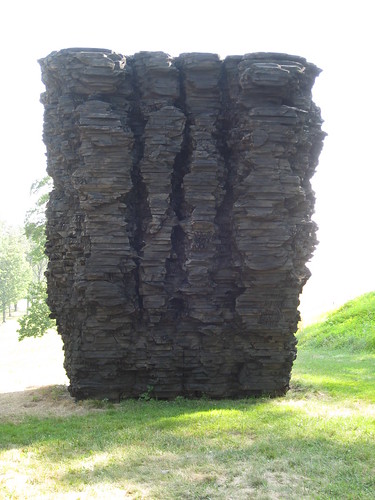 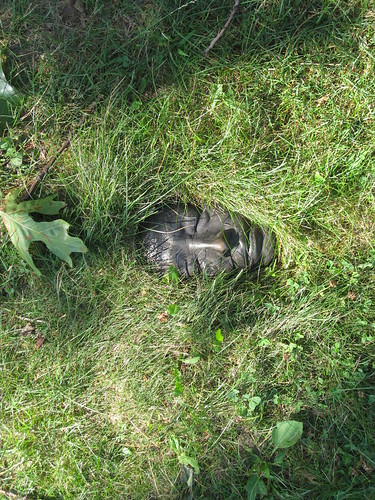 We bundled into the vehicle again & were off, off, off! Through winding roads & mountain tunnels! "This is like Monaco!" said Kira & Jenny as we snaked through mountains with the greatest of ease. It was actually a pleasant as hell drive; the Hudson, the Catskills. Those were the Catskills, right? Eventually we drove through Sleepy Hollow, where I had my brilliant brainstorm to do a kid's cartoon in the spirit of The Real Ghostbusters. Call it The New Ghosts of Sleepy Hollow, & have them all at like, Spook Academy with their "Headmaster," the Headless Horseman! I'm a genius. Anyhow, we got to the train station & found the bathrooms all locked up. Luckily our sweat had dried thanks to judicious use of air conditioning, but we still had to change into our fancy clothes in the van. We met Nino once his train came in, & we went to Blue Hill at Stone Barns. So, Blue Hill is a fancy Manhattan locavore restaurant. Stone Barns is the fancy organic farm where they get most of their stuff. Blue Hill at Stone Barns is an over the top, shoot for the moon, slow food utopia. It kind of basically makes you crazy with decadence. Seriously, for yesterday only, my vice was changed to Gluttony. We drove through the farm: "I'm going to eat you!" I shout at the sheep. Or at least their milk, Kira points out. Then we see a couple getting married! "I'm going to milk you!" That is what I said to them! Or eat them, Nino says. I'll eat anything on the farm! So in we go, in to the classy place. I have to say, I'm pretty sure that, without exaggeration, it was the most lavish, sophisticated & extravagant thing I've ever done. Getting the full-on chef's special at Blue Ribbon, when Jenny proposed, is second, I guess. Still dropping a k-note on dinner is intense.

We went in & I started with a ramp martini; that is, instead of an olive or onion, there was a sprig of wild garlic in it. It was very salty & pretty amazing. Nino had the same thing because duh, ramp martini. There was like-- a broccoli rabe martini? We didn't get that though, because duh, ramp martini. Jenny got a chamomile infused vodka cocktail that was good, but its subtleties were lost on me since the ramp martini is not what you'd call subtle but rather what you would call "pan-galactic gargle blaster" like. Only instead of a slice of lemon, a piece of wild garlic. Kira had a non-alcoholic drink that reminded me of the Kachumba Kooler I had at Tabla. There was a bit of hilarity with the wine selection. So, background. Kira is the boss of us. Like, Kira is very knowledgeable about food, so when we go to a restaurant, she makes the calls, we back the plays. Except, since this dinner was theoretically Jenny's belated thirtieth birthday, Kira wanted to involve Jenny! So when the sommelier came over, it was a bit keystone cops. We were asking for advice, or wanted to be, in theory, but Kira just kept getting more information, until Jenny was swamped at lost. Jenny said red, the sommelier recommended white, so then there was five minutes of talking about reds that were lighter or whites that walked like reds. We were with the program enough to make jokes at Bougalis Nouveau's expense but otherwise somewhat struggling; we eventually settled on a white, & got a bottle of the Bougalis he had suggested once we were halfway through dinner.

I wish that I had kept track of what we ate, because I have no idea. With eight courses & countless smaller dishes, I was quickly lost in a sea of incoming synaptic information. I'm not a foodie. I would get my nutrients from pills if I had the chance. I've been slowly altering that, since hanging out with people who care about food is boring if you can't meet them halfway. That being said, places like Blue Hill are exactly the way to engage me on food. Everyone there is a food geek. I mean, a hardcore nerd for food. The dance of the dishes, the synchronized plates, that is fun, but the real goods is when they tell you what you are eating, why you are eating it, & how they made it. Made it from scratch. No, wait, beyond scratch. How they got the dirt, how they grew it, & then how they prepared it. Or how they grew it, fed it to something else, & then killed it. Also, they were scrupulous about filling my water glass. I drink a lot of water & I never get enough at a restaurant, so that alone! Jenny was like "it was worth it to Mordicai just to have enough water to drink." Seriously though, the guy filling my glass even joked about it. Our server was Kira's friend & she asked us if we had any aversions. Nope! Well, Kira had a few pregnancy things. You don't order food at Blue Hill; they just make you whatever is in season, whatever they have on hand. "How about organs, brains, that sort of thing?" Oh we were like bring it on. & they brought it. You know, full paragraph stop, Finglofin banging on the gates of iron, "& Morgoth came."

I'll just try to snatch them memories out of thin air. There were tiny vegetables on a fancy set of skewers; of those, the zucchini blossom was best. There was face bacon. Face bacon! That is, they cut up a pigs face & made it into bacon, & it ruled. We ate veal marrow with sturgeon caviar on top; the plates had been specially built for the meal, being all torture device & clamps to hold the sawn in half bone; there were also specially made utensils to get at it. That was when the top fell off my head from my mind being blown. There was Hudson River fluke, raw with egg whites; that was amazing. It all was amazing, whatever. There were egg yolks in lardo; there was a soft boiled egg wrapped in panko & somehow cooked differently at various layers; here liquid, here firm, here soft. Crazy. There was pig liver, instead of foie gras, & dang if that wasn't crazy amazing. They brought out a selection of artisan grains, which I was super into. "Oh, let me give you a crash course on how we imported these archaic grains that people used at the dawn of time. We made this brioche with it." That was served with freshly curdled sheep curds, still warm, & herb jelly. I think the lamb brains were the best part of the meal. They were served on a bed of corn & woah. Lamb brains are delicious. By course five I was full, but they didn't even care. Just kept on swinging. The pork loin was better than the pork belly & the pork leg, but only in the relative zone where you can compare them to each other, since all were awesome. I'm pretty certain I'm leaving out courses. Dessert was chilled crème fraiche with basil, which was great. I don't like sweets, but I do like dairy-- so making something that was like ice cream but more dairy is right up my alley. The last course was almonds & wild strawberries & fresh cut sections of honeycomb. I am gonzo for honeycomb. Put it in your mouth, suck out the honey...then keep sucking because there is even more honey. Then bite the wax & get even more honey. Oh yes, honeycomb, you & the lamb brains are my dear friends. Teeth friends, biting friends. Then we met Dan, the head chef, & went winding home. 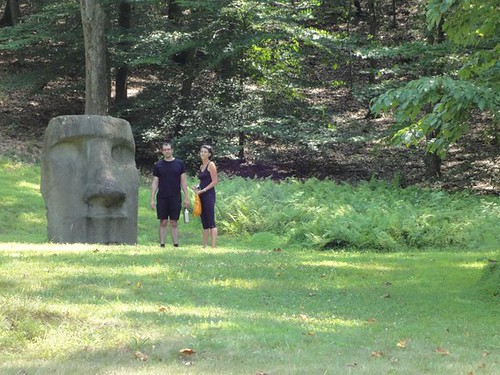 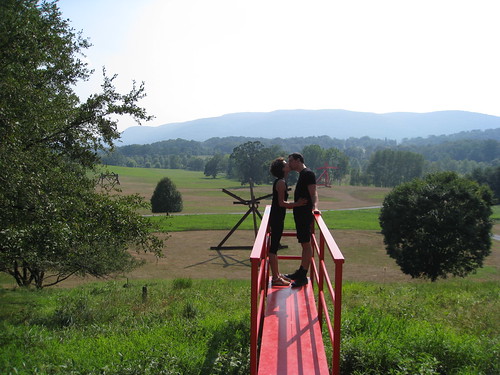 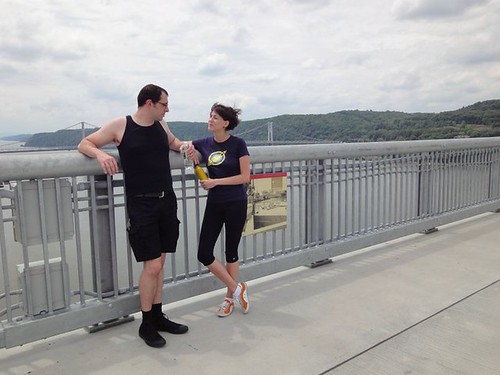 (Me & Jenny at Storm King & The Hudson Walkway: photos by Kira.) 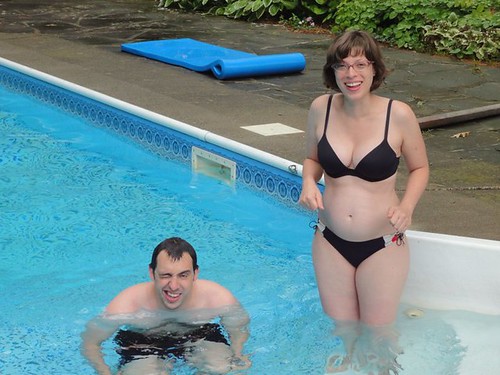