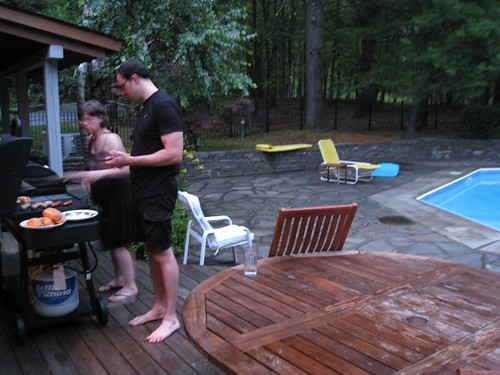 The brakes are on, vacation-wise, & that is alright with me. I'm terrible at being on vacation it turns out; I can't get over the niggling feeling that I should be doing something. It has been all about grilling, lately; grilled sausages & bratwurst (weissewurst?) last night, for instance. Granola for breakfast left room for the burgers for lunch; those were pretty solid, all continuing the grass-fed meat trend, with organic bacon & basil & pickles & onion & tomato. I had two. We cracked open the standard wine bottle sized beer we had; the Cantillon Iris which is just so darn sour. Otherwise today, just reading & swimming. I used up all my graph paper drawing in marker & then changing my mind; I knew I should have printed more! Today I'm tired & a little cranky. The free-form wandering doesn't produce as many kilo-cuddles as I'd like; Jenny is off doing her own thing. I don't like healthy separation!

Hawkmoon: The Sword of the Dawn by Michael Moorcock.

Oh I really do like these Hawkmoon books, they are a rip-snorting bit of fun. I am really very enchanted by the villains, the decadent & mad Dark Empire of Granbretan. The wordplay, the colours, the adventure; this is what I want out of a nice chunk of fantasy. Fun, swashbuckling, mood. Creepy crawlies & spooky action at a distance. My leanings towards Granbretan aren't for naught; the first half of the book is chock full of it. Curiosity about the rest of Hawkmoon's world is whetted as well-- I'm interested in Asiacommunista but I'll settle for post-apocalyptic Amarehk. The rolling lighting sphere-- I just assumed it was an interdimensional ship when I saw it on the cover-- is neat, as are the...off-world colonial refugees? I can't help but think that is what they are-- I couldn't figure out the riddles of their names. I don't want to over-speak regarding the plot of the book, or their adventures in Narleen on the southern coast. After my crestfall upon finding Elric somewhat bland & boring, Hawkmoon is just about enough to make me overlook Mister Moorcock's false opinions about J.R.R. Tolkien & his anti-heroes as anti-Conans. Well, that & his clear cut admiration for the John Carter of Mars books. These are some ripe tales of fell deeds, delving into the deeps of fiction. Also, I really think the current volumes are gorgeously packaged.
Collapse