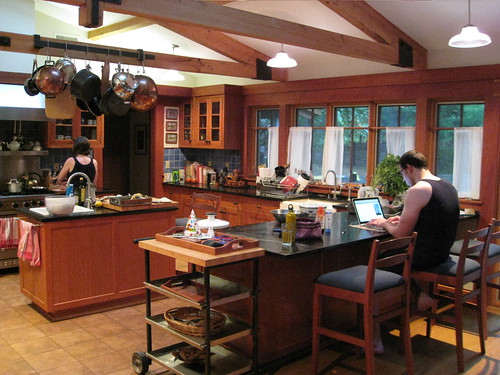 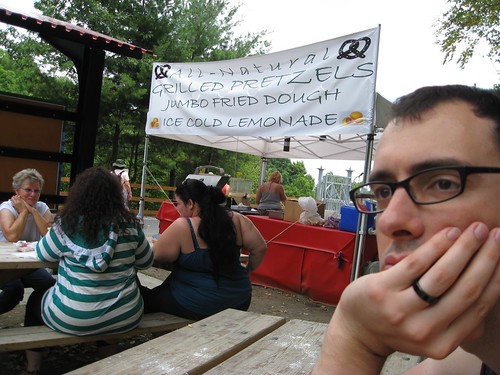 Let us settle in to ye olde chair by the fireplace & see if I can't motivate these fingers to dance. BANG! SHOOT! KAPOW! I said dance, boys! So here we are on vacation; Jenny & Kira & me. No Nino! Nino got the job of a hero, he has to go to the dragon cave & get the Arkenstone, or whatever. He's too busy to relax. So bright eyed & all that, we piled into the van & came up to the "cabin" upstate. I put those quotes in because as far as cabins in the woods go, this ain't. This is more like a "summer house" but a little nicer. I figure, once you have a climate controlled wine cellar, I think you've arrived, you know? Ah! Sorry, fourth wall interjection-- I just poured myself a drink & I already feel better! Jenny thought to buy some of our favorite nerd beer in advance, so we've been drinking Professor Fritz's best. So here we are, after a bunch of travel & concern. The morning was driving & Burger King breakfast-- let me tell you, the Croissanwich is rubbish. Nonsense. Gross. We were going to stop & have family dinner at like a hilarious chain restaurant like TGIFridays but it turns out they aren't open for breakfast. Huh. So Moon's day we got up here pretty early & just chilled out. Swam in the pool, cooked a bunch. Well-- cooking a bunch is sort of assumed? Kira cares about food so there are food productions. Dandelion greens & wheatberry salads; all kinds of stuff, I can't even remember. Maybe I should try. Lunch was a salad with greens & radishes & basil other stuff; also fancy bread with fresh mozzarella & cherry tomatoes. Dinner was the aforementioned dandelion greens, also wheatberries with some other kind of cheese & anchovies & squash. The squash was grilled; we also tried to grill ribs which was a failure; they burnt & charred. We still ate them, though. Otherwise, mostly relaxing.

Then today! Today is happening still but it has been less laid back. We had breakfast-- eggs & bacon on an English muffin, but you know-- they were yuppie muffins, the bacon was all grass fed & the eggs free range, spiced up with roasted leeks & some decent cheese. Then we were off to Poughkeepsie! Of all places. We went to The Walkway Over the Hudson, a state park sort of thing? There is a mile & a half long walkway over the Hudson River; it used to be an important railway line but not any more, but since it was built to last they turned it into a landmark & refurbished it. It was nice? The bathrooms were kind of notable-- basically a port-a-potty but not chemical or water-based; some kind of "machinery" composts it underground. Ok...ay. Anyhow, we walked across & then walked back. It was hot & I drank a lot of water. The Hudson river is kind of cool-- it flows both ways? Based on the tides & elevations? Weird. After that we went to eat in Poughkeepsie, at a place called The Artist's Palate. You know, it was sort of predictable neo-American fare, but it was pretty good? Jenny had lobster & macaroni & cheese; that sounded really good in theory. She liked it, I didn't care for it-- not because of anything besides preference though. Kira had some kind of salad which looked okay? It wasn't what I wanted. I had a pork sandwich & it was actually really good; you know, a decent pork sandwich is good by itself, but this was pretty ace. We also split some zucchini fries with sun dried tomato aioli which I liked a lot. Then! On the way back here, the power steering went out! Luckily, right in front of a car repair shop. We sat around & watched Victorious & iCarly on Nickelodeon, both of which are...really weird. The car got fixed up, & the gruff mechanic, while explaining why the belt had slipped off, was like "...that isn't supposed to happen." & we cracked up because...well, yeah. I isn't. That puts us at now. Since the car is broken we might have a more relaxation oriented vacation, which is okay with me. We also might have to come home sooner, though. 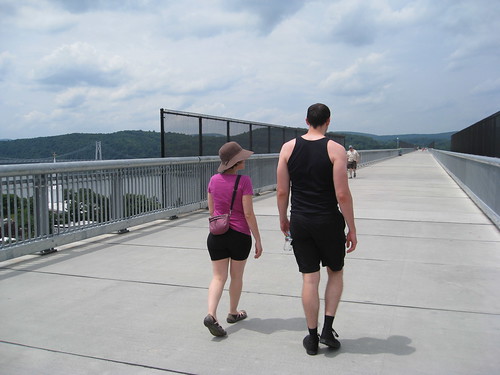 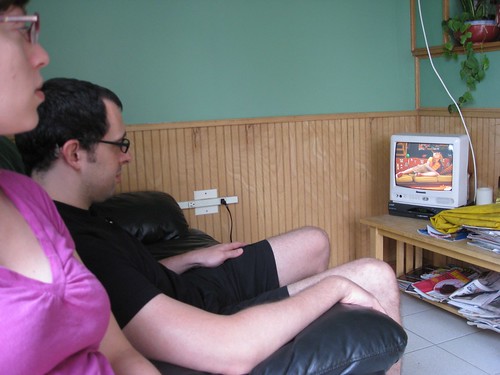