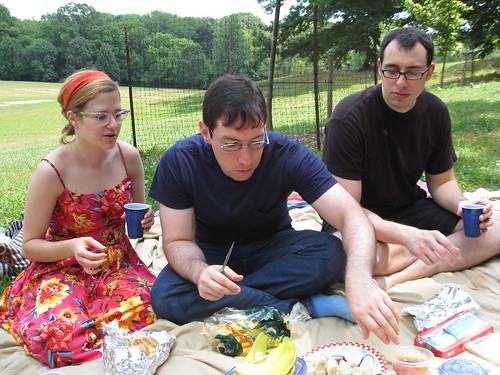 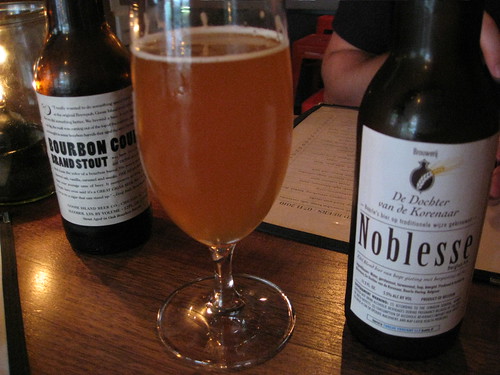 I am pretty tired right now! I mean, I normally wake up at six thirty, so waking up at six fifteen shouldn't be that big of a deal-- except yesterday was Jenny's birthday! So there was a nice long day of straight drinking. Start at, oh, about noon. We walked over to Prospect Park-- the, yes, Jewel in New York's crown-- eat your heart out, Emerald Necklace! (Well, I do miss the Emerald Necklace parks, but as far as actual urban parks go, Prospect takes the cake) About forty-five minutes of chilling out later-- during which I didn't relax because I'm territorial & was looking for folks-- we met up with Kenneth, who showed us to the place Carla & he had claimed. A hidden divot! That is why Prospect Park is excellent; Daedalus couldn't have made it more labyrinthine. The semi-circle of trees also meant dog Claudio could run loose. So, prosecco! Then Lilly rolled up, sans dog Archie. He had been bad! Still, she brought madras! Madrases? Madrasi? & then David & Maggie with epic amounts of food-- the Fordelladorianfraud standards like greek yogurt & fruit & honey & Carla had made sandwiches & then we had brought gin & tonic & blammo! Picnic in the park with a nice buzz on to take the edge off. Crimes! There was wine, & screw drivers & a few hours later I had sunburn on my legs! Then things are a little bit fuzzier the rest of the day...

Jenny & I ended up at Beer Table, killing time. I had a Goose Island Bourbon County Stout (black gold, oaky, chocolate, luxurious) which was pretty damn good. It was the darkest thing on the menu, & that makes me compare it to the Harvey's A. le coq Imperial Russian Stout, which I really dug, was really weird, & has the advantages of nostalgia on its side. I thought I'd had it before, & I had! Good for you, memory. Jenny had (& I sipped) the De Dochter van de Korenaar Noblesse (clean, peppery, refreshing, herbal, floral) which I liked too-- it reminded me of the Belgian White at Johnny Mack's. Then, Carla & Kenneth joined us & we all went over to the newish gastro-pub, Thistle Hill; it was fine? Here is the quick rundown: the salad was a yawn, a snooze, not worth it-- plus maybe we get the same vegetables from our CSA that they use. The olives are another skip-- get an assortment from Union Market or wherever. The fried fennel was just basically fried batter; so yeah, all our appetizers were uninteresting. I had the rainbow trout, which was tiny? Kenneth really liked it; it was fine. Jenny's porkbelly is what I had wanted to order before she demanded birthday right of priority. It was pretty good. Carla got the duck confit with cheese & greens & that was...really, really great. The best deal though was Kenneth's burger, which was copious & very excellent. The grade of meat was just exceptional. So yeah; burger & duck? Go that way. There was wine...& then the evening continued! We split from them to go over to Kira & Nino's to watch True Blood. I continue to like Vampire Bill best, though flying Eric is pretty hilarious. We'll see! Anyhow, then we walked home & collapsed into a coma.

How to Mellify A Corpse: And Other Human Stories of Ancient Science & Superstition by Vicki León.

The statue of Zeus
burned, lost with Byzantium.
Gardens? Lost to time.

Do you like trivia about the Classical world? That is the question you've got to ask yourself going into this. When I say Classical, when the subtitle says Ancient, they mean European. Well, Mediterranean; that is a funny thing about history, huh? All clumped right there; Germania & Libya are beside the point! Still, China & India & America are out of the loop here, which is sad-- but provides potential for sequels. As discussed; what you have here is a pop history of scientific development in the Western world. There was a lot of overlap between segments-- the chapter before had just told me about Archimedes, but the top of the first paragraph in the next is like "Mister Eureka, Archimedes was the relative of the King of Syracuse..." I was befuddled by this semi-constant restating of first principals; then I realized the indelicate truth: this is a back of the toilet tank book. In the vein of Uncle John's Bathroom Reader sort of. You've got what you need for a self contained gift for someone who flips through books, starts in the middle. I'm more of an academic bent, but I liked it-- a fun read & you know how I feel about the medicinal properties of honey. Hooray!
Collapse