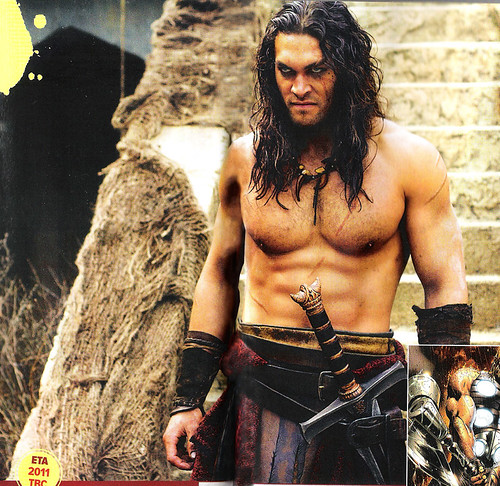 (Jason Momoa in the forthcoming Conan. I'm convinced. Via

Hey! Some good news at least-- I didn't fail to save my Mega Man 10 game like I thought...I just saved it in slot two instead of slot one. Victory! So now I've beaten all the Robot Masters, & it will take me a while to defeat Wily's fortress. I played a bunch on Freyja's day; since it was a half day I had plenty of time to come home, goof off, & go to the gym before game. Hitting the gym was nice; I put in a solid chunk of time & did a good-- or at least decent-- push. At game I got a text message from Jenny asking if I'd seen her earlier text, which I hadn't-- it said to come home soon! Since it was her birthday weekend & getting on to time to go anyhow, I asked if we could end the session & got home in time to cuddle the fussbudget loveguts. Easy! Saturn's day-- the Titan's day!-- was laid back. Lazy morning of reading & looking on the computer & playing video games. Then! The gym again, which is nice-- double team! Jenny came with, & borrowed my headphones, so yeah...Saturn's day at the gym was rough. I put in an hour & fifteen, but barely any of it was cardiovascular work; lots of machines! Which, good. The all-over! I miss doing the circuit at Kent State's gym, actually. I think about that occasionally. Then we came home & ate hot wings & watched back episodes of Rotten Tomatoes. Uh, I really want to see Phantom of the Paradise now! Then we busted out the gin & had some cocktails while watching Legion.

Oh poor dumb movie. You had a chance to be decent, in a B-movie way. Your dressing was fine? The problem with Legion is the characters, ultimately. No one subverts their cliche-- instead they are just a bundle of offensive stereotype. That black guy? Of course he's a hoodlum. The yuppie couple? Just contemptuously what you'd expect. Drunk father, check. Are the women helpless, not worth arming, & basically only there to be protected by menfolk? Yep. Seriously-- if that movie had any characters in it, it might have been much better. Oh, & stalker creep out Jeep? Yeah, you are the worst. Passive aggressively following a girl around after she tells you a bunch of times she isn't interested in you is called stalking. Just because she's stuck at the job your father owns because her economic circumstances are bad doesn't mean it is okay. & making her a crib for a x-mas present when she has clearly said she intends to give her baby up for adoption? Is just total bullshit. So yeah; somehow he's supposed to be the hero. That guy isn't the hero; that guy is the enemy. Anyhow, the only relationship worth anything in the film is the one between Michael & Gabriel, the brothers at war with each other-- & even that manages to get ruined by clumsy deus ex machina five minutes after it is established. & no, I won't cut it a slack for being actual Deus in the ex machina. The Prophecy still reigns supreme as totally awesome killer angel B-movie fare; gosh I like that movie. Jenny & I argued about whether Legion was worse than Constantine; she says yes, but I say no only because Constantine also managed to betray its source material. On the other hand, other than the goofy wings, I liked Kevin Durand & Paul Bettany & Tilda Swinton as angels, at least. In a perfect world they'd all star with Christopher Walken & Viggo Mortensen in some kind of Prophecy remake. Maybe Ron Perlman could be in the mix somewhere. & Clancy Brown.

Today is Jenny's birthday! I gave her gimlets & a notebook besides the Aang keyring I already gave her.
Collapse