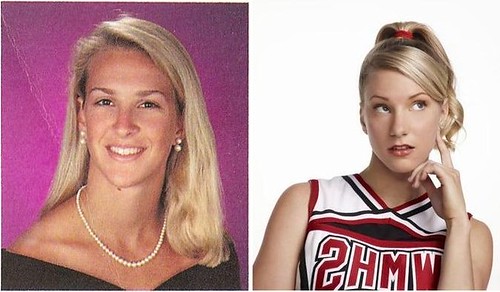 (TheTamari came up with this comparison for Rachel Maddow's yearbook picture.)

Yesterday was a day of futility & self-loathing. Well, it didn't start out that way, but I was a little fussy about it eventually. Our CSA pick-up was Thor's day this week on account of us wanting to take all the vegetables on vacation with us; when I went to pick them up, kaboom! There was Kira, Kira Kaboom I call her now, picking up her share as well. We got a lot of stuff; four pounds of peaches, beets, kale, lettuce, purple things, red things, all kinds of vegetables I don't know from top or bottom. Alien food! It comes from a foreign star. Events conspired to help Kaboom out; Robert was picking her up, & I caught a ride to help them lug a few boxes from Kira & Nino's apartment into the van. Scored myself a ride home in the bargain, thank you very much. At home Jenny was defleshing some chicken-- super cute-- & I fully intended to go to the gym. I did! The lethargy-- or well, really the Sloth-- came on me, instead. I made a salad of cold chicken, some beet leaves & some lettuce with balsamic vinegar, then I bailed on the gym. I pretended it was to hang out with Jenny, & maybe that is true, I do like her a lot. Still, I ended up annoyed at myself for it. I will go today, so it isn't a scenario of doom, but I wasn't happy. Instead I drank a beer & played some Mega Man 10 & that ended up making me more frustrated than less! I beat a boss-- Strikeman, the soccer ball guy-- but I neglected to save the game. So that is pretty aggravating. It isn't the biggest problem in the world, since Mega Man games are mostly about training your thumbs & reflexes until they pass a cusp & you are able to beat a level; I should still have the skills to pay the bills. I will wipe out Strikeman again. Just made me a little bugged. Then Jenny & I watched Tosh.0-- it was not that good an episode. I continue to like web clip shows, but come on, now he isn't even trying to be funny-- & the Web Redemption wasn't even sincere. Listen, Tosh.0 works because the Web Redemption usually offers genuine redemption to "fad celebrities." Not doing that just makes you a jerk, & there are already plenty of jerks on television. Anyhow; we closed out the night with a back episode of infoMania; I didn't agree with Sergio's "Music Intervention." Snoop Dogg is a valid dude because he's not fronting. He's not some punk drug dealer anymore; he's a guy who can go on Martha or The View & be charming, who can cameo in soap operas & sing songs about True Blood. That is "keeping it real." He's a successful musical entertainer. His life is pretty okay. So that is what he raps about. Anyhow, even when my opinion differs from Mister Cilli, I ain't mad about it.
Collapse