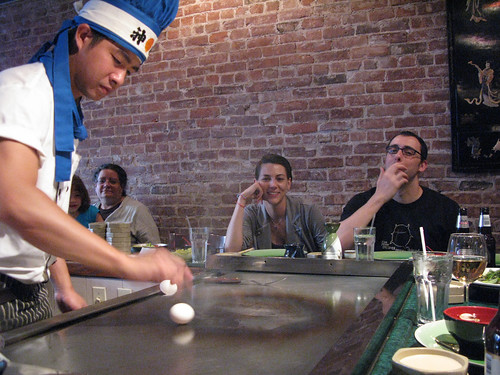 (Lilly took this photo of us at Fire Nation Hibachi.)

Yesterday was a bit of a wreck but it ended up strung together like pearls! Jenny & I both slept till like, ten o' clock, which is crazy; that is two nights in a row! So we ate breakfast & watched some television & before you know it, we were out the door. The weather was sweltering; hot sun, beating down, burning my feet just a-walkin' around. Really though, the pavement turned our stroll into an Easy Bake Oven (tm) & meanwhile Jenny just wasn't bothered. She was all, "It's fine." No! No it wasn't. We got to Johnny MacK's about twenty minutes before Carla & Kenneth, & we used that time to talk some more about The Last Airbender. You know what? I thought of two things I liked about it! One, Aasif Mandvi. He actually was decent in the movie; he's the only one who acted with enough melodrama. Considering he was paired with Dev Patel, who underplayed things to the point of being invisible, & the guy who played Uncle Iroh who had literally no traits in common with the beloved character of Iroh, & the guy who played Fire Lord Ozai who was just...incredibly poorly cast. Seriously, what the hell was up with the Iroh & Ozai casting? Anyhow, Aasif was fine, which is saying something considering the garbage he was working with. The other thing was when Aang used kung-fu to hide behind Zuko. That was nicely done & evoked one of Aang's standard tricks on the show. The flip side of that is that...well, otherwise, all the focus on martial arts was totally lost on me. I mean, you might as well have just had guys wave their hands around when you cgi fire-- it doesn't need to be like, a kata or tai chi or whatever.

Anyhow! Carla & Kenneth did eventually show up! & we drank some & ate a little; I had oysters! Blue Point oysters & they were pretty good. The house beer was a Belgian White that was really peppery. Anyhow, after that we came back to our place to play Rockband, or Band Hero or whatever it is. I am not very good any more; bemoan! I'm not entirely embarrassing on "medium" unless it is on the drums-- I can't do the foot pedal without doing both drum sticks. All or nothing! We sat around goofing off thus for a while until Kira & Nino invited Jenny & me to a barbecue at Robert & Judy's place! Hey, rock & roll. So they picked us up & we were off, zoom! To cram burgers & hot dogs down our throats, with slaw & kraut & potato salad. I...I ate too much. I thought I didn't...but then I did. It was the water I drank afterward that made the buns expand. I think. Anyhow, we hung out in Robert's backyard getting bug bits & chillaxing. It was nice! There was an attempt to walk down to the promenade along the water but it was crazy down there. Seriously! So we came back & headed home. There was some discussion about how after we picked up our milk from Kira (she gets us the grass fed super cream stuff) we'd walk home but I wasn't having that, so I fussed & I kicked until I got my way. I was over-full, sleepy, & crabby! Then voila, we were back home, where we tucked in for bed, but not before Jenny played goofy songs for us on her iPod. Okay! Here is more from hibachi, anyway: