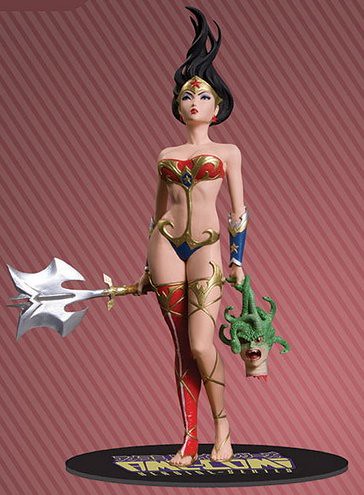 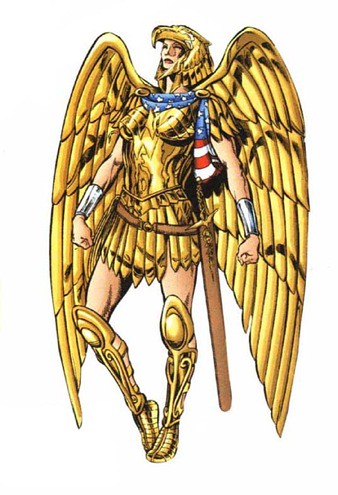 I've been thinking more about the Wonder Woman thing; I don't know why, but it is sticking with me. I really like the first image above, the Ame Comi Wonder Woman (version Two) by UDON studios. It has a sort of Frank Frazetta or Boris Vallejo vibe to it; a pulp novel of the weird gleam. She looks like the might put John Carter of Mars in a choke hold or crush Conan of Cimmeria beneath her heel. Sure it is skimpy but it isn't demure; it ain't school girl. The all-gold eagle armor look I like as well-- Alex Ross' design, natch. I mostly like it as her "suit up!" look. I want that to be her "oh, the hell-world Apokalips is in orbit with the Earth?" outfit. Her "Anti-Moniter? Got it, lets deal with this!" garb. I think that is her full regalia, & that her bracers, her girdle, her breastplate-- those are all pieces of it. Maybe sometimes she wears shoulder pauldrons of gold or whatever. Mix it up, while still having forethought, knowing what all the puzzle pieces are. Just a few continuing notions on the topic. Like-- I also think maybe the Amazons should feel "at home" to Superman? Like, Themiscrya should been on the same wavelength as Krypton. Then again, I have my own opinions on Krypton that are neither here nor there.

I did basically nothing, yesterday. I was fussy & chose to fix my attitude, rather than go to the gym & languish. It might have backfired on me, since I'm not going today, either, on account of the holiday. Still-- I beat a bunch of bosses on Mega Man 10, & I caught up on the last episodes of Glee that we had in our DVR, plus the most recent episode of Leverage, which continues to be a great show this season. Seriously, now it is all about neurolinguistic programing & hypnotism? Oh...okay. Other than that all I managed to do was run some errands; get pots & soul for our growing herb garden; object deposited by our CSA into our hands. I also ate one million sandwiches; an egg & kale & goat cheese breakfast, a turkey & kale & goat cheese sandwich for lunch, both on sourdough bread. Today has been, well-- similarly lazy? But I am less fussy. If it wasn't a holiday I'd be free to go to the gym, but it looks like events are conspiring otherwise. I have drinks, barbecues, not to mention prep for my game tomorrow...stuff. Stuff happening now! Now! I gotta go or I'll be late.
Collapse