The Last Airbender follows that classic adage of storytelling: "Tell, don't show." Oh gosh, it was really awful; the only plus side was how awful it was. That is, so bad that there is no worry that it will supplant the cartoon in the public consciousness. The zeitgeist is aware that the cartoon is the real Last Airbender. So that is my first touchstone: skip the movie, see the cartoon. Seriously, stop what you are doing & watch the cartoon, if you haven't yet. All three seasons are available instantly on Netflix. If you are already a fan of the show, skip the movie with a clear conscience. This isn't something you need to see. By way of further caveats, let me just clear the room of my biases. I clearly think the television show was the bee's knees...because it was, it was just astonishingly good. M. Night Shyamalan-wise, I'm generally a fan, even of things other people dislike. I hate Signs & avoided The Happening, but I like (& own) The Village & I think Lady in the Water was a great kids movie. I am also willing to cut movie adaptations a lot of slack: I was very enthusiastic after I saw The Golden Compass & I still like that movie. Golden Compass is actually the perfect comparison: at least that movie got some things right. The casting in The Golden Compass is great, & I think it ultimately works well as a visual appendix-- the plot is a mess & all runs together but if you relax & just enjoy it, it pays off as a pretty film that reminds you of how much you liked the book. The Last Airbender doesn't do that-- it fails across the board, at everything. There are a few design elements, like the Fire Nation's ships, that I liked, but when you are reduced to saying "there was some concept art I enjoyed?" about a movie, you know it must really be terrible. & it was. I didn't think it even could be good; people talk about the special effects, but well-- one of the strengths of animation as a medium is the plasticity of it. Strange kung-fu, implausible physical feats, the supernatural, bending-- none of it seems out of place, & more to the core, humor & drama intermingle freely. I think because it uses animation, you are able to slide from jokes to action to emotional displays very fluidly. Nothing about the film was fluid, or easy-- it was all clumsy & jerky.

I think the most offensive thing about the movie is the pronunciation. Aang's name is not Aahng & Sokka does not have the same name as the way Vampire Bill prounounces Sookie's name-- he is not Suhkeh. Listen, M. Night. You don't get to play the "oh, this is how Tibetans would have really pronounced it." You lost that card. Remember? How you started a huge controversy by applying the Hollywood tropes of whitewashing to a beloved pan-ethnic cartoon? So much so that they coined a new phrase for it: racebending? How there were casting calls that showed the production realized that the characters come from non-Caucasian backgrounds, but also explicitly sought Caucasian leads? Here is the thing. The races & nations of Avatar: The Last Airbender are fictional. They are also clearly influenced by non-Western sources; predominantly Pan-Asian, with hard sprinklings of Mesoamerican, Inuit, Pacific Islander & others. & the characters are all drawn with a dark palate. Okay, there you have it. Heck-- Aang is the lightest skinned character on the show; I wouldn't have blinked if you made him a white kid. The thing is, casting all the leads as white people shows a degree of contempt for diversity & the source material. I don't lay this at Shyamalan's feet entirely; it is the factory mill of Hollywood that perpetrates institutionalized racial discrimination. The fact that a generation of young viewers got a taste of how it can ruin something, on how prejudice hurts everyone including white males who have to watch the mediocre film output, is a grim piece of optimism. The actors aren't even good? Or-- that is unfair; I don't blame them. The writing is wooden & the plot is a string of plot exposition threaded together with meaningless captions & geo-tags. Oh poor movie, what a failure.

Still, the evening I had was very nice! It was a big Cancer birthday bash, more or less. The night started at Ginza; Jenny & I met up with

elladorian on the walk to the place, then found Nick & Rachel outside waiting for us, & were at last joined inside by Lilly & James. There was a gift exchange; everybody except Rachel, James & I are July birthdays. Once the loot was done being split up by the party, the hibachi got underway. Let me just say how much fun it is to have a hibachi restaurant a couple of blocks away. Cheesy fun & good food at our whim. We were a fairly boisterous group-- not as crazy as the time we went there & did a million sake bombs, but still, raucous. I got the second tossed broccoli in my mouth; actually, most of our group did really well at catching the flung food! We clapped & laughed & stuffed our faces. We had a little time to kill when we were done, before the movie started, so we came back to my apartment & drank some beers, watched some Avatar: The Last Airbender cartoon highlights, & put on temporary tattoos: mostly Mister Men but some mockingjay ones. I put Mister Strong & Little Miss Scary on my forearms. Then we all rounded ourselves up & made our way to the movie theater! Or well, first we stopped off for ice cream. Then we stopped off for candy. Then we made our way to the movie theater! We went to The Pavilion, so we could see The Last Airbender in 2D-- no use being tricked into seeing a darker, more expensive 3D version-- & our worst fears & predictions were true. They did stick us in a tiny theater. Pavilion is a terrible theater; I really want to support my local indies, you know? I'm just screwed by them every time I go there. Guaranteed bet; if you go to see an explosion-heavy, special-effects based movie there, you will get the small screens. Just a sad fact; I don't know why they are so terrible, but they are. At least the seats were not stained, broken, or missing. At least none of ours were! Poor dumb Pavilion, poor dumb Last Airbender. When it was all done, we walked home, spouting off about how bad it was. We lost Nick & Rachel first, & then Lilly & James were only just beginning their evening. Really? At midnight? I am old; no, I am going to bed now. There was maybe a spotting? Drama avoided? Then finally we cleaved off from David & Maggie & then poof, we were pumpkins. Stroke of twelve & we were in bed.

ranai was in town, by Danielle. 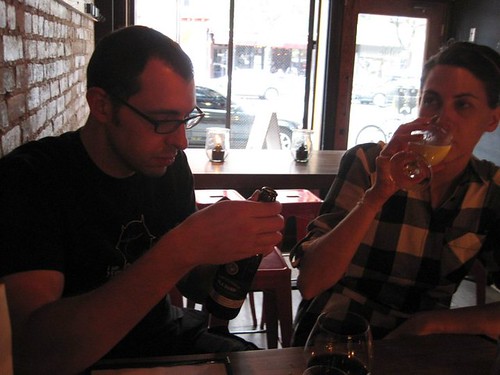 Me & Jenny at Beer Table; Jenny hates this picture for some reason. 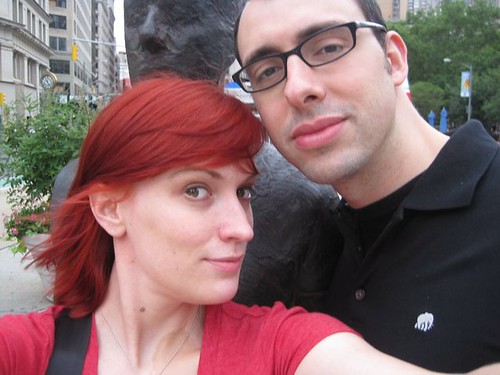 Danielle & I with the "Event Horizon" guy after getting lunch. 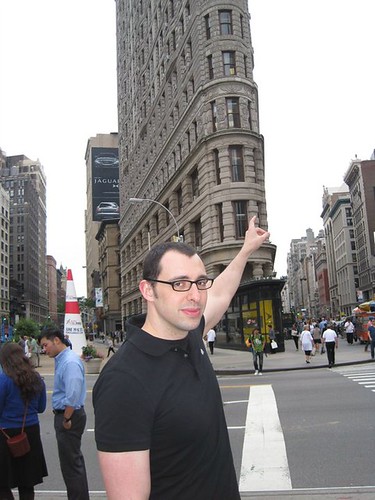 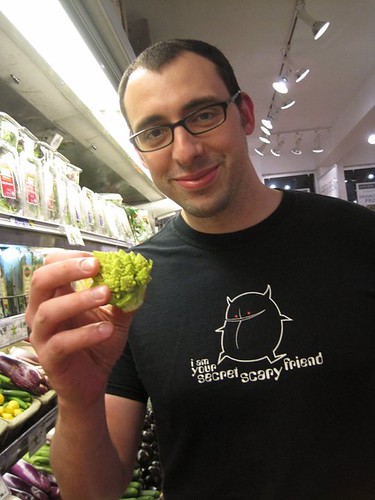 Me pointing at where I work & with a weird vegetable I pretended was drugs.
Collapse