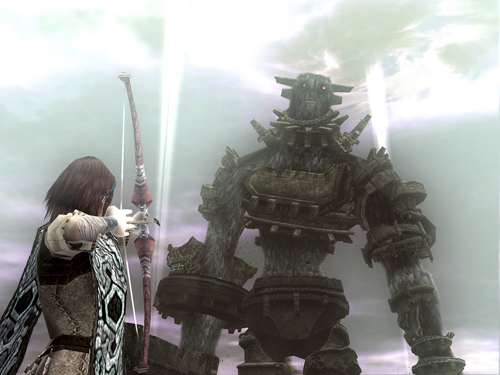 Yesterday after reading some comics & digging around on the internet for bones, & checked to see what I had recorded on my DVR. Hey! Greatest discovery all week: Batman: The Brave & the Bold episode "The Super Batman of Planet X" recorded! For some reason the programming on my DVR is goofed up & won't tape "First Run Only" episodes of Brave & the Bold, so I had to just start taping all of them & manually deleting the ones I'd seen. I'd missed this episode due to that shuffle, & was really excited to see it! If you don't know about Zur En Arrh it is tough to explain how awesome that episode was; I only found out about it when Grant Morrison threw it into the mix. Anyhow, the episode was gggggreat. Kevin Conroy was the voice of Zur En Arrh's Batman, which was awesome, plus he was a Clark Kent/Bruce Wayne mash-up; he had a robot butler named "Alpha-Red" which should totally be part of Batman One Million's scheme, what with Robin the Toy Wonder. "Rohtul" is the villain ("Luthor") voiced by Clancy Brown. Anyhow, it was a bucket of fun. After that I went to the gym & put in another hard hour & fifteen. Good job body; you lifted that one thing, pushed that other thing. Pirates of the Caribbean: At World's End was on when I did cardio; that movie is confusing, but that means watching it in fifteen minute bursts is as good as anything else.

Act Two was out to Bay Ridge for a cooking lesson at The Oakridge Kitchen. I rode out their alone since Jenny was coming from work; on my walk over I ran into Edbury & we talked turkey. "Gobble gobble?" I was like. Anyhow, inside was a grilling class, that was the plan! So I ducked in & got to work! This was the "Indoor & Outdoor Grilling" class, & the last class before they take a brief hiatus for Kira to have her baby. We started off with a Summer Beer Cocktail; beer with gin & elderflower liqueur. Yay. The class was pretty big, but everyone was really friendly & with the aid of copious beer cocktails we all got along famously by the end. There was Brined Pork Poast on the grill outside, Spanish Rub Skirt Steak out there as well. I was teased for asking what "butt rub" is; but I guess the internet just says it is a spice rub. No interesting story. Also on the outside grill-- well, grills, since there were two, a Weber & a professional grill-- there were Thai Chicken Thighs, Scallops Wrapped in Bacon, & Shrimp. Inside was the vegetables; the Asparagus, Radicchio, Romaine, Peppers, Carrots, Scallions, &c. Things ended up slathered in Herb Butter or Red Onion Jam or Orange & Olive Vinaigrette or Slaw or Smokey Kimichi Dip or Anchovy Vinaigrette. Needless to say, it was kind of intense in my mouth. I think the top contenders were the Scallops Wrapped in Bacon & covered in Herb Butter versus Spanish Rub Skirt Steak on Focaccia with Orange & Olive Vinaigrette & a piece of cheese. Then Kira drove us home! 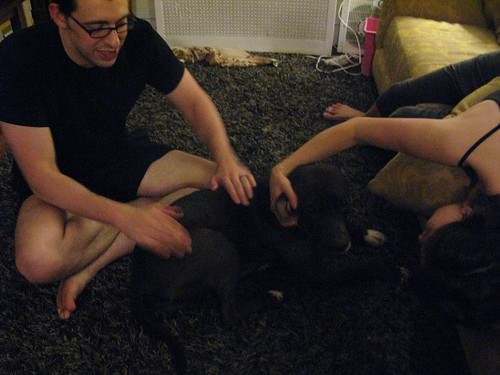 (Me & Jenny playing with Archie at TV Night.)

So I successfully defeated Wily's reign of terror. It took me a bunch of E-tanks, an M-tank, & every weapon in my arsenal, but Mega Man 9 has been beaten. How does the game stack up? Very well, really well. I'm pretty effing pleased with it. I can't tell if it is harder than Mega Man 2, or if my spinal cord just keeps the routines & patterns needed to beat 2 knit away in its fundments. Anyhow, very fun; I do wish Mega Man had the Power Slide, though I'm okay with there being no Charge Shot. So...I guess I might be ready for Mega Man 10, huh? Also worth noting: totally listening to The Protomen as I jot this out. Otherwise today has been pretty hardcore lazy. Watched a little Daily Show, read a couple of comics-- you know, for all I liked the "Sinestro Corps War," I find "Blackest Night" & "Brightest Day" increasingly insufferable. I do like Mera's costume though. Speaking of insufferable, I also read an issue of Nemesis which is just are boring & predictable as you'd think. Mostly the scenes & plots are just window dressing so that the characters can yell obscenities at each other. I will say that I like his costume, though. So hey, comic books, some of you are boring the crap out of me, but at least you have good fashion design principals! Jenny has been wilting & sauteing vegetables; after the class last night Kira gave us a bunch of the CSA stuff she wasn't going to be able to use in the following week. Oh, man, speaking of last night-- I got up to go to the bathroom like, eight times. Seriously, maybe eight times. Now, I generally drink a glass of water immediately after going to the bathroom, 'cause I'm a hydrator, but that was just ridiculous. Now I'm trying to summon up the gusto to make my weekend a gym three-for; bah, I've got time. Jenny is making steak & snap-peas for lunch; maybe we'll watch Leverage? & then later I've got True Blood with Nino & a bunch of people from the class last night. 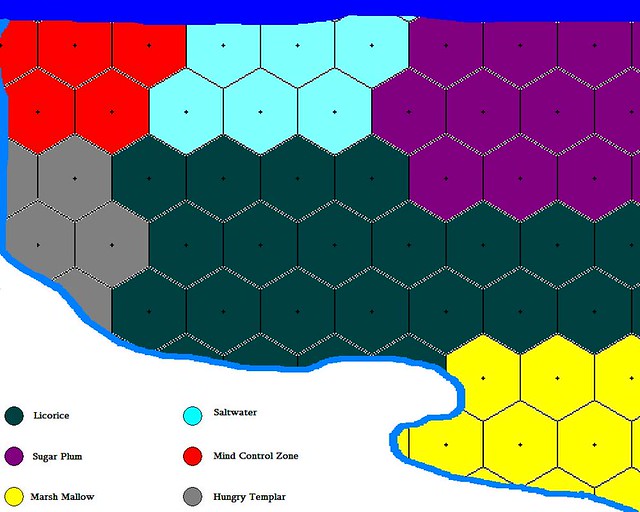 This loosely describes the political situation in Anise; of the three kingdoms the first arc of my campaign will follow, Anise is the centerpiece (so far) as three of the four characters based their character background there (the fourth has ties to Aubade). Anise is ruled by a hereditary arisocracy of panhumans-- these Alphas are their own species, & are known as "The Flower Gentry." The Flowery Gentry were once part of a much larger kingdom, but the Pearl Queen they followed vanished. Since then, the Licorice Duke has held the regency. It is worth noting that as regent the Licorice Duke-- Black Bear in Black Cedars-- has at least nominal authority over all the areas on the map; this is true to a greater or lesser extent depending on a number of factors. It is also of some interest that Anise is devoid of cities; rather its population is distributed; some clump around the many castles & palaces of the Gentry or rove in nomadic bands called mobs.

The areas marked "Licorce Duke" are areas within the Duchy of Licorice, & are thus under his direct & (largely) undisputed control. The other Dukedoms are Saltwater, ruled by the eccentric & enigmatic pauper Duke, Slumbering Heart Dwells on Hill (a player character) & Duchy Marshmallow, overseen by Duchess Rise Up With Fists, whose swampy lands are home to vast worms. The Sugar Plum Barons are merchant princes, rising up to fill an available economic niche. Theoretically the Sugar Plum Duchy, the wealthy barons positioned themselves as advisers & Electors & when the Duke Sugar Plum died they simply...couldn't come to a decision regarding his hair, leaving the post vacant until that vacancy became something taken for granted. The status quo. Now the Sugar Plum Barons have their own systems of leadership, their own syndicates of economic democracy. The Hungry Templars are similarly semi-independent. They are the military groups, each insular but linked through ideals of brotherhood. There is an infernal cast over the Hungry Templars, bleed from their antagonism with the neighboring nation of Antiphon. The Duchess of the Hungry Templars is more properly The Spice Drop Duchess, & is the wife of the Licorice Duke-- the Licorice Duke who has notably garnered a reputation for killing his concubines. The Abaia Mind Control Zone is just that-- a region of the country where other forces have encroached on Anise, a place no one goes without...slipping away. To go into the Mind Control Zone is lose yourself, sooner rather than later.
Collapse