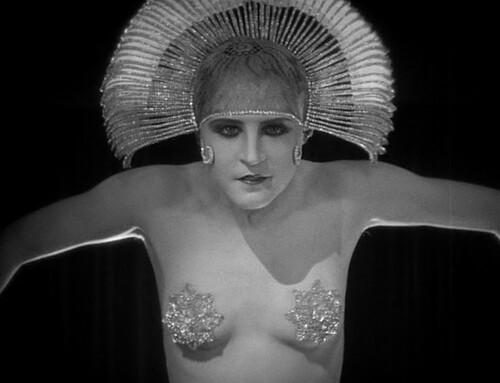 Double party fiasco! Well, short day at work on Freyja's day-- I take the train across the bridge looking at Metropolis glittering in the sun thinking "The Wizard's City!" You know, gleaming spires of glass & steel. "Erathis ain't all bad," I'm thinking. "Maybe she's a green lady with a torch & a tablet of laws?" Get home & play some more Mega Man 9. I can get to the last form of Doctor Wily but I can't beat him yet. Then to the gym; I put in a nice bit of labor. Nothing is on television in the middle of the day so I watch Deal or No Deal on the elliptical. I bump into Martin on my back fifteen-- the extra bit of push. I did good but I am going to try to go again today, if only for a little while. After that, it is party extravaganza. First we meet up with Kira & go to Jodi's birthday party; it is at the apartment in Windsor Terrace Jenny used to live in, & that I lived in for the first couple months I was here, all broken faced. We gossip, it is a party of gossip. Then to Bar Reis for Maggie & Emily's birthday. I walk in & get ICED. I should've known, I've been planning my Ice Block for DnD Night but dang it I didn't prepare for this. So I take a knee. We hang out but I've been sleeping like crap all week; bed time. Hit home & crash-- I sleep all the way till nine in the morning.

Reading more comics, again making mine Marvel. First, let me just say that selling Maria Hill, Sharon Carter & Victoria Hand together as "Agents of the Avengers" is an awesome pitch; I sort of want them paired with Black Widow or heck, to all be Black Widows. Anyhow, it could be a real Charlie's Angels kind of thing; by which I mean the McG films, which are great. Oh, oh & add Colleen Wing & Misty Knight! Oh man I would read the heck out of that, especially if Matt Fraction & Ed Brubaker did a collaboration on it; oh that would be incredible. Speaking of Fraction, he is absolutely the right guy to be writing Invincible Iron Man right now. I never really was an Iron Man fan; I mean, sure, he's a guy in a fancy suit-- I much prefer the Super Soldier or the Norse God, you know? Fraction has simply twisted the knob to 11 & made Iron Man a science fiction character again. The Iron Man suit is a pool of swarming nanites that Tony Stark stores in his bone marrow when it isn't in use? Oh...okay! That, now that, makes sense to me. I have always admired the HALO Corporation from WildCATS 3.0 (& their precursor in Storm Watch-- in that, the super-advanced alien technologist just decides to hijack capitalism to start utopia by, well, selling products that make consumerism obsolete. Like, he starts by selling batteries that never run out of charge. That is what Tony Stark is up to now, & I find it compelling. You know, plus fighting robots or whatever. & back dating Tony Stark as like, the inventor of the iPhone (or at least the face of the company, the Steve Jobs).

Between that & The Incredible Hulk it makes me wonder about the "smartest people alive." All men of course, but at least not all white: Reed Richards, Victor Von Doom, Tony Stark, Bruce Banner, Hank Pym, T'Challa, Hank McCoy, Amadeus Cho. It makes me wonder...what are those guys up to? Okay, well. In World War Hulk there was a bit where Cho insisted that the Hulk was smart-- that the reason the Hulk could rage against the world & somehow not kill anyone was because he was running the numbers in his head. I could see that being elaborated; you know "Your brain does calculus ever time you move your hand to catch keys tossed to you; the Hulk has Banner's brain, but not for thinking-- his cerebellum is working overtime, doing those same calculations for being the strongest one there is." Reed Richards is tough; I like to think that, well-- I like to think that the Fantastic Four are always on incomprehensible adventures. Like, while the Avengers are fighting off a Skrull invasion, the Fantastic Four are missing & come back like "Oh, yeah, sorry; the microverse has a creature very similar to Galactus & he was threatening to destroy a molecular construct that would have started a chain reaction that ends only with the death of the 156th President of the United States. It is complicated, but we stopped him." Anyhow, I imagine Reed Richards is so smart he's useless; like he's doing pure research that nobody on the planet can monetize or involve in physical technology. Like a scientist in the Renaissance doing the math to map out the electron shells; p, s, d whatever, none of his peers could really make any of it work. Cho's whole "quantum brain" thing has a visual style that is distinctive, & I don't think he needs tweaked. Doom is up to stuff, crazy stuff; he wants to change the world but with, you know, magitech robots that crush your throat under their heel. Fine, he's good. Hank runs into the same problem the rest of the X-Men do; what do you do with them? I frankly liked Genosha, I liked the idea that the X-Men might be slowly turning into the Inhumans-- they have their own island, they are weirdos, there you go. Pym! I have to say, whoever started calling him "The Scientist Supreme?" That is an angle. That might actually give Pym a reason to exist. If I was in editorial control I'd make Doctor Strange the Sorcerer Supreme again (sorry Brother Voodoo!) & then I'd have two comics that always have the same case-- like, both Pym & Strange have the same mission, the same adventure, & they race to see whose methodology wins. T'Challa...well, yeah. Somebody needs to do something smart with the Black Panther. I don't know what. Maybe get an actual African writer to write him?
Collapse