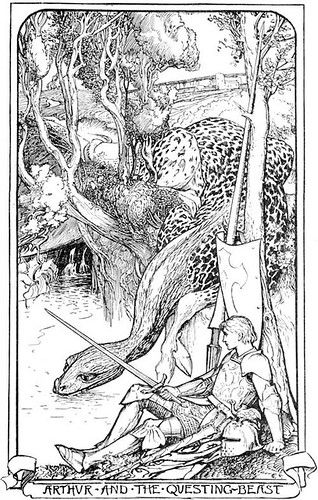 So yesterday I got obsessed with the Elvish Meme, but that wasn't the only thing I did! Though there was a fair amount of lounging around drinking coffee. It was hot; hot enough to use the Summon AC Materia. I went to the grocery store at some point, picking up a range of goods but leaving a carton of orange juice in the middle of the aisle. I didn't figure that out til much later; I set my stuff down (basket in one hand, OJ in the other) to run through the list to make sure I had everything, then picked up the basket & checked out. Oops. I honestly don't know what I did yesterday besides obsess about Tolkien stuff; I really like a chance to luxuriate in that, since Middle-Earth was such a huge part of my mis-spent youth. Debating the translation of "General Jinjur"-- the Oz character-- with

general_jinjur was a highlight-- she suggested "gwiniggûr" which translates to "sweetheart death" (gwinig = "little baby" (diminutive) gûr = death) & I enjoyed what tremendous geeks we are, ending with saying "What Sindarin roots can we use to best show the layered conceptualization-- continually evolving from book to book-- between Jinjur's militarism, feminism, & the feminine?" Because yeah, that is how I roll, that is my idea of a good time. Now I am making my friends at work do them, too. Catch the virus!

I also went to the gym; I was terrible about going last week, what with

ranai in town. My work out was dang good, though; it was short at an hour & fifteen, but mostly I've been shooting for an hour, hour fifteen, lately. I've really been hanging to my new stratagem; if you can do more than fifteen in the set, then you need to increase the weight. I put in two spurts of fifteen minutes on cardio, watching Eureka & Lethal Weapon, & did lots of machines, since there were a bunch of cute girls & impressing people is a good motivator. Topped things off with some fairly hardcore free weights action-- well, for me anyhow. Curling with the seventy pound bar makes me feel bad ass, & doing four sets is one more than three, three being the minimum I shoot for. Anyhow, I just managed to juggle my workout in a way where I didn't have to pause to catch my breath too much, you know, shuffling to like, the calf machine when the stomach workouts were taking the wind out of me, or hitting the elliptical when I my muscles were sore. Fascinating! Having a body is pretty hilarious, right? I mean-- not like I don't still have general dysphoria, but it is the difference between a slow computer with lag & a zippy fast brand new machine. Upkeep the meat till you can upgrade, that is the motto.

Finished the day up hanging out with Kira & Nino; oh my effing heavens, I am super jealous of pregnant people. & like, everyone is getting pregnant? Razzamfrazzum. We had a salad & some pizza (white pie with brocoli rabe & garlic, regular pie with sausage & onions) & watched True Blood. Uh, Jessica is great, & the King of Mississippi is great; I am worried that the show will follow the plot of the books, though. I am concerned about it. Anyhow, I also really like Vampire Bill, especially when he is like "sure I am trying to mainstream but I'll still kill a pack of werewolves, fool." Only it is more like "Ah'll steel kil uh packuh of werewoulves, fuhl!" I don't quite get why there are Sookie haters? Except when the portray "bold" as "uppity." Uh, Sookie, don't go chasing a werewolf thinking you're going to yell at him. Okay? Still, a good episode, & I mean-- everybody who cares to has already seen the Snoop Doggy Dogg video for "Oh Sookie," but it still is pretty amazingly double-yew tee eff. You know, "WTF," like this awesome "$tar Trek" video.
Collapse