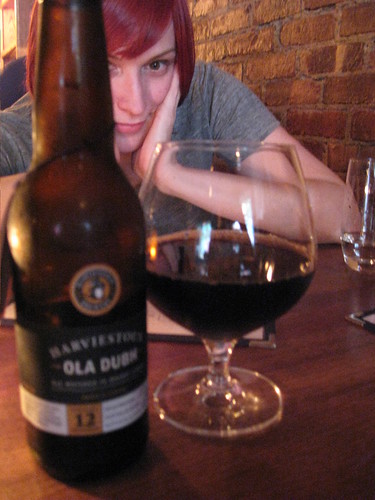 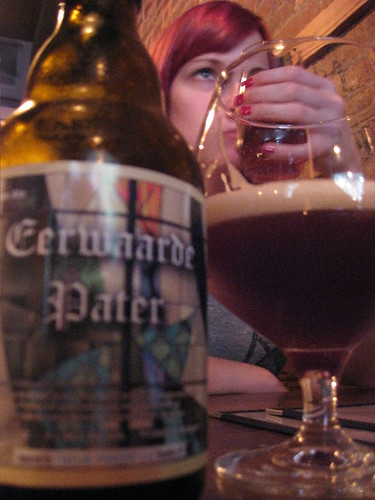 Last night I came home, fell into Jenny's arms, & I guess our bickering is over. We've mostly readjusted! Good. We ate some Fatoosh for a quick pre-drinking dinner while watching a skipping episode of Tosh.0 in which he interviewed the "What What, in the Butt" guy & the Daily Affirmations girl who I hate for "making my ovaries hurt." We shoveled spiced meats & ground vegetable pastes into our gobs & before too long we headed out to meet Danielle at Beer Table. We got there & Danielle already had a glass of the Hopfenstark Station 16, which I mostly liked for the smell of it. Which was also the best trait of the first beer I picked, Harviestoun Ola Dubh 12 Year Highland Park (char, heather, peat, oak, cocoa, elegant), Scottish beer that is aged in the cask of, well, 12 year Highland Park Single Malt Scotch Whiskey. I wonder if they have versions of the beer aged in the 16 & 30 year Scotches? I liked it fine, but it didn't have much of a finish, which ultimately made it less fulfilling than it could have been. I saw on the menu when we first came in that the Professor Fritz Briem Grut was back on the menu, so Jenny ordered that & for good measure thought to order three more for us to take on vacation in a few weeks. She's an effing genius, that one. Second round for me was Het Alternatief Eerwaarde Pater (dark fruit, cherries, rich, full texture, clove, spice) which I liked fine; I sure drank it quick enough. Jenny ordered Popperings Hommel Ale (lean, dry, grassy, honey, crisp) which I actually liked a lot, & Danielle got Oskar Blues Gordon (floral, herbal, burnt caramel, apparent alchohol) which was another case of a beer I liked the smell of more than I liked the taste of-- not that it was bad, I just wasn't gung-ho for it. I had suggested that someone on Aardvark to go to Beer Table for their blind date, so we were gossiping, trying to figure out if it was anyone in the room! Well it wasn't it turns out (they had gone the day before & his date ordered one of the tiny 330 ml bottles for $38 which is awesome for her) but there was a guy we decided was on his date, & was getting stood up, & Jenny & Danielle were bummed on his behalf. We said our goodbyes & went home to cuddle on the couch & try to watch a skipping & badly recorded episode of The Daily Show; when that failed I turned on Mythbusters' "Top 25 myths' clip show. Then to bed with my buggaboo love, nice & early.
Collapse