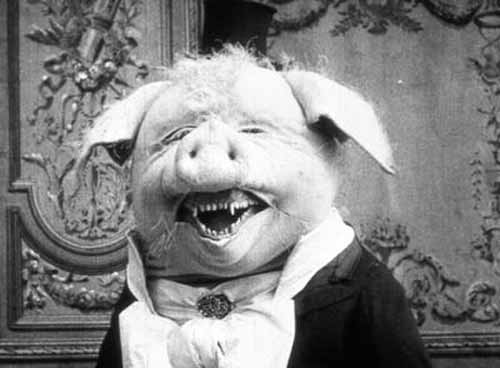 (From The Dancing Pig, The Haunted Hotel & An Awful Skate; or, the Hobo on Rollers.)

See, I've let my garden grow untended & look at what a mess! It has been uprooted by boars, horrible bigs with flaming lances, shields of bronze, lace cuffs & dead eyes. This is what I get for ignoring my memory for a couple of days; it all slips away, like star systems in Grand Moff Tarkin's hands. Let me try to get back on point, ars memoriae of archeology, sieving away at the dust of all my yesterdays. Oh look, an arrow head, oh look, a bone needle. Sun's day morning I went to the gym & then we watched The MTV Movie Awards. Ken Jeong started shaking & I wondered if he was nervous, he started freaking out a little & I wondered if he was faking, then he started crying about his wife not being dead & I was like "woah, I forgot about how people have emotions for a minute." Other than that, it is funny to see Tom Cruise decide to charm America again. He everybody, remember how he is charming enough to make you stop caring about how crazy he is? Well, you do now. The gym, by the way, was a nice time; I pounded out some free weights like woah. Swing those seventies, buddy. Other than that, who can say? We must have eaten some kind of breakfast, or lunch, but what? Oh...wait...we had...I almost have it in focus, we ate it a couple of hours before we went to Marie's party...oh well we had a salad for breakfast, I remember running around in the grocery store not finding what I wanted...I can't quite find it. That is right, Jenny just told me; I made a pizza! Well, out of like, a pre-made shell. It was sopressata & artichoke hearts, & other than asking Jenny what to do, I totally made it myself. Also later we watched True Blood with Kira & Nino, but...

...mostly what we did on Sun's day was go to Marie's party. It was a nice time! Here was the story of that party: people would be like "Hello my name is Xer Yery. Oh that is right, we met at Marie's last book launch party two years ago. Here are all these details about your life I remember!" & I'd go "woah, how do they know this stuff?" Well, with the notable case of that, I figured it out-- the lady in question had been pregnant then, so while Jenny & I were slouching towards inebriation, she was rocking the sobriety. Mystery solved! At the party I was feeling a little...out of it? Like, I kept wondering if I seemed shy. I was in a shell! Of some mysterious kind. I asked somebody if they knew Meggy but only because I profoundly misunderstand the nature of graduate schools. Anyhow I was wrong about them being at the same place & the same time, anyhow. Most interestingly, there was a woman there I liked, like-- she was flirty, but at the same level whether Jenny was around or not-- in other words, not hitting on me but just flirty. I am also flirty, so I appreciate that. Anyhow, by the time we left I was like "actually I really liked her, I think we could be her friend!" & Jenny told me that I had come to the same conclusion two years ago-- that we had been buddies at that party, too! I really am terrible at memories. Anyhow, I'd totally hang out with her & talk about LOST; maybe I'll try to get her contact information from Marie.

Otherwise the week hasn't been steeped in action, not really. I haven't gotten to see Jenny as much as I'd like, for one thing! Something always seems to come up. On Moon's day we had burgers & poutine from Corner Burger & watched some Tosh.0, which continues to be the exact same show it always was. Occasionally funny, & occasionally flat. Hey, racism...isn't hilarious! Then yesterday, I helped Kat move some stuff from her old apartment to her new one. This was in the middle of the day, but both me & my boss went, so it wasn't like I was playing hooky or anything. We met Kat's mom & there was a comedy of errors with forgetting keys & such, but since the apartments are only a block away from each other, no sweat. After work was the first CSA pick up. That was fun! First, there is a lady I've seen on the train with the same coat & same haircut as Jenny & she was there. Anyhow, I got kale, bok choy, garlic scapes (?!), arugula (maybe?), spinach, a potted basil plant, leeks, 2 bins of strawberries, & pea pods. Maybe more, I can't remember. Lots of leafy stuff, this time, though I guess that alters pretty radically with the season. Took it home, went to the gym & knocked out another decent piece of exercising. Came home & Jenny & I ate salmon & some salad she had made. Very tasty; we watched some Daily Show & some more Eddie Izzard & then went to bed. I was feeling all prickly pear in bed & we sort of argued? Or tried unsuccessfully to have a discussion? I wasn't mad, just like, needy. Jenny said if she hadn't been out of town last week I wouldn't be so sensitive; true story.
Collapse