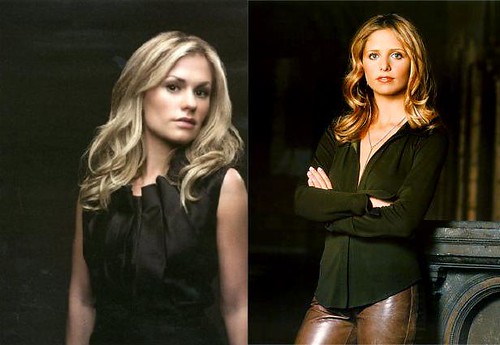 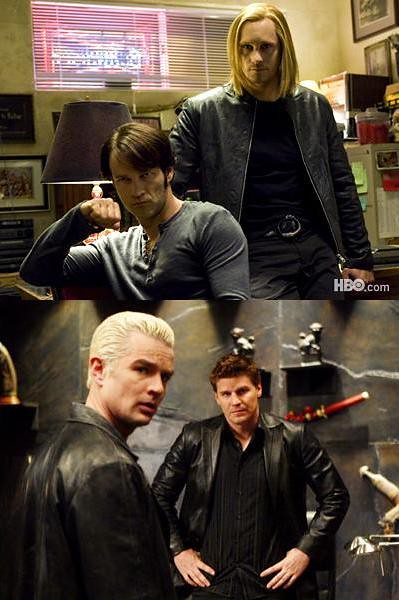 I've been making comparisons about True Blood since I first watched it, & I know there is nothing even slightly original about comparing it to Buffy the Vampire Slayer. The fact that it isn't a new opinion doesn't make it a bad one, though, & as I'm late to the game on the show, & because

qube912 wanted me to, I thought I might ramble about it a bit. I guess it is popular to have some kind of Buffy backlash these days, because a lot of people I've mentioned it to have had intense visceral reactions against the comparison, with a rebuttal that boils down to "but I don't like Buffy!" First off, those people are crazy; Buffy & Angel are watershed television, are solid sagas. Besides Buffy Summers being the evolution of the "Final Girl", it is just good television, & a distillation of what makes paranormal stories work. True Blood has the same thing going on; while Buffy had monsters as code for teen angst & sex issues, True Blood has monsters for, well, adult angst & sex issue. Heck, you've got a young blonde superpowered heroine, you've got a blonde vampire & a dark haired vampire in a love triangle with her. Boom, that is really all the comparison you need to make. Both Bon Temps & Sunnydale are regimented & judgmental settings for our characters to make transgressions against, both are shows with creature feature elements that are code for various life lessons, both have a club of close friends running back-up. I'm no cinematographer, so I can't quite articulate this point, but the lighting seems related? Maybe it is a function of the show being set at night so frequently, maybe the decaying antebellum sets of True Blood evoke the "monster's den" of some Buffy episodes? We certainly have over-lap between mother-less Buffy & grandma-less Sookie. Sure, one is slightly more melodrama than camp, one is more slightly action than romance, but we're talking difference in the mix; it is still the same cocktail. There are so many overlapping points on the grid; I can't help but wonder at what may be intentional? I don't really think much; I think we're looking at archetypes here, right? They are probably both the same as Dark Shadows for that matter; I have never seen that show, though. Life is a funny thing, isn't it? Anyhow, predictions? I think Sookie & Bill will stay together, more or less, unless Anna Paquin & Stephen Moyer get a divorce, at which point they may pursue the Sookie & Eric relationship in earnest. That is my prediction, anyhow. From last night's episode, the homoerotic dream sequence was the standout; it was handled just right. Didn't take itself seriously but didn't play for a joke, was plausible enough to give you a "wtf?" moment, & you know what, the gentlemen in question have some chemistry! & Jessica is totally my favorite. Anyhow, just looking at the jagged edges of the zeitgeist poking out-- the bones in the skin of fiction. Just like when I failed to watch more Resident Evil, I kept thinking of the totemic power of a red dress. 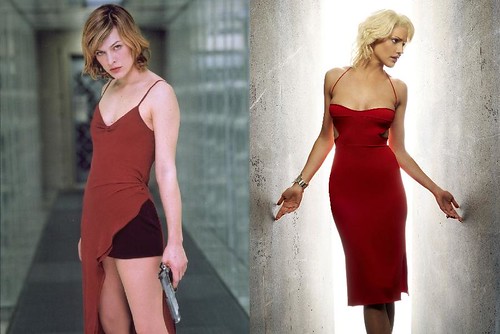 The Mayan and Other Ancient Calendars by Geoff Stray.

These books are surprising in the best ways; I'm very pleased with the whole Wooden Books line, like the Stonehenge one I read a little while ago, & the others I've had for ages. They are pretty, which makes you get a sort of "gotta catch 'em all!" attitude about them-- the more you line up on a shelf, the better they look side by side. Beside that, they are cheap, which makes them great little gift books. Ultimately though, it is the fact that the books themselves are quality. They aren't navel gazing New Age mumbo jumbo. This book especially, this book is intense. Stray talks at length about the Mayan calendar, the Mayan numerological systems (the skull's jawbone marks the tweens!), & how the whole thing links up with astronomy. & I'm not talking about "through the lens of mythology" or anything like that-- we're not talking about cyclical Mayan cosmology here, we're talking hardcore calendary study of the vigesimal Mayan calendar, with enough sideline information about other systems to put it in context. The Calendar Round of Tzolkin & Haab, the wasp-star Venus; seriously, if you need a quick little how-to or reference on the Mayan Long Count, this is the book for you. & yeah, really pretty.
Collapse