Mediums: Speakers with the Dead by White Wolf.

Making that haiku was rough! Like saying "antici...." & then never closing it. Haunting! Which is the point. This is an old Wraith: The Oblivion book that Ed gave me (& partially wrote & edited). Wraith, in case you missed it, was a game that was too brilliant for its time. It is the game that prefigured a lot of the smaller pretentious art games that are circulating now. The basic premise of the game-- you are a ghost-- is buoyed up by the extraordinary cosmology, what with lands of the living being like the scum on the ocean, & beneath is the Shadowlands, & beneath that the Tempest & the islands of Stygia et al, & beneath that the hellish Labyrinth & finally at the center of all things, infinite Oblivion. The simplicity & sheer resonant mythological oomph of it still gets me. Besides that, rules like the Shadow (where another Player portrays the dark side of your personality, a whisper in the back of your head urging you towards Oblivion) & the Harrowing (where, when your character takes enough damage to "die" you fall into a passion play enacting your deepest fears) are still some of the most elegant innovations in gaming, if you ask me.

Mediums was part of the "Year of Allies," along with books like Ghouls: Fatal Addiction. Mediums are the humans that can contact the dead, however they manage to do that. I understand the impetus for this book-- it is hard to play a wraith in the "typical" Old World of Darkness (oWoD) game. Vampires & Werewolves had major antipathy, but at least they lived in the same dimension! Mediums was a book ahead of its time-- it prefigured books like Geist: The Sin-Eaters & Second Sight. & really it foreshadowed the publishing direction of the whole New World of Darkness (nWoD): optional niche books. That is, a medium might never become germane to a campaign but in case you do want or need one, here is the book for you! There is information on a wide range of (mostly shamanic) practices; indigenous North American traditions from the Hopi to the Ojibwa; vampiric Giovanni necromancers, fennel sword wielding Benandanti; pseudo-scientific government agencies; boardwalk fortune tellers; cults devoted to the Shadow-dominant spectres---the whole shebang. The book is rules light-- you get a couple of merits, but mostly it is setting information & plot hooks. This is a win; it gives the book long term legs. If you are running a modern game, if you are playing Geist & want some ideas or just want a fortune teller, this is most certainly worth picking up to mine for ideas. 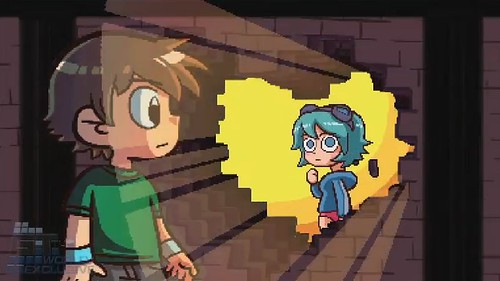 (From the Scott Pilgrim video game, screengrab from Radio Maru.)

Jenny is coming home in a couple of hours! That is the good news, the gospel son! Now go tell all those other fishermen about it. That's how Peter & Andrew would have done it. Yesterday was a half-day at the old office & so from there I tra-la-la'd down to Chinatown with Julia, Andy, Tiffanie, Nicole & Sherene to get some dim sum at Mandarin Court. I've probably been ruined by East Harbor Seafood Palace, because it was...alright. Not to look a dim sum horse in the mouth! I sure did eat a bunch but nobody had the same agenda as me; like, the beef noodles weren't popular? Mostly Julia & I were the only ones who dug into the bok choy? & the bok choy was maybe the best dish. Doing dim sum with different crowds is odd, not in a bad way! Afterward I came home & hit the gym, did a nice little hour & a half, a hardcore invasion of muscle confusion. Bam! & ran into Martin, keeping up the co-worker bonanza. When muscle-time was over, I came home. Reigh Bunny is in town, & we had talked about her & I meeting up, so I canceled on DnD & tried to rendezvous with her. Alas, she wasn't ready to go until 10:00 PM & honey, I'm like a grandpa in a rocking chair on a porch with a shotgun in his lap. Ten o' clock is my bedtime. So I did! I went right to bed. Had a dream that Nino was selling "V"-- vampire blood as a drug, a la True Blood-- & that I was in a huge convention hall, drafted into a posse looking for him. & I found him, under a table, hiding beneath the tablecloth. I had to decide whether to rat him out, or not to tell-- in which case someone else would almost certainly find him & then we'd both be in trouble. Well, I didn't snitch, & we both went to jail! In jail though, the police couldn't find anything to charge me with; then I beat up a prison gang leader, & got his followers transferred to dog kennels. Don't mess with me on the inside!

Today was nice; I slept in! I had been sleeping crummy all week, go figure. I slept in till about eight thirty & then spent the morning...geez, I have no idea what I did all morning. Washed some dishes, made some coffee, but that is about it? Caught up online, I guess. Then around noon I met up with Jocelyn, Brian, Brian's son Henry, Amy, Omry, & Jordan (who had previously been typo'd by Amy as "Korean") at Perch. Brunchtime, you know? We all met up & chattered away like Chatty Cathy; sat in the back & had ourselves a nice little time. I had iced coffee & the baked eggs over leeks & rosemary foccacia. Jenny had, over the telephone, all but insisted that I order it; I reminded her that since she wasn't here it wasn't like she could snipe from my plate! I had a drag on Brian's Bloody Mary; really a sip is all I could ever want of a Bloody Mary; it is just too much. Mostly we spend brunch teasing Henry, because adults are all jerks. When we'd finished we went to the Brooklyn Superhero Supply Co. They tried to trick me into the Devillainizer, but I wasn't having it. We split up after that, & it just so happened that Brian & Jocelyn & Henry all ended up at my apartment for a little while. It started as a quest for a bathroom but ended up with Brian watching the first bit of the US of A versus England game of the World Cup. Meanwhile I fed Joceyln & Henry seltzer & bitters, gave Brian & Jocelyn a taste of kimchi, & played with my DnD miniatures with Henry. & now they've left & I'm just counting the ticks of the clock till I go pick up Jenny.
Collapse