Prince of Wolves by Dave Gross.

Firstborn gets the sword.
Bishops kill the Second's hem.
The Third is a witch.

Pierce put this in my hands at Book Expo America & said "I rate books from 1 to 100. No book gets more than an 85, because I don't think there is such a thing as a perfect book. I give this book an 85." Okay, that is a pretty convincing sell! I cracked it open at home to see...that the book is dedicated to him! I teased him-- "how many points is the book being dedicated to you worth?" Well, I'll tell you what, I don't think it biased him all too much, because this really is a ripping yarn. Set in the Pathfinder world, this novel is, in full disclosure, what you might call a "gaming novel." That is to say, it involves certain concepts that players of roleplaying games will intrinsically be familiar with. Or course, games like Dungeons & Dragons might be the biggest influence on the fantasy genre in the last three decades, so readers of imaginary texts shouldn't let that alienate them. Pathfinder is the unofficial "3.75" edition of Dungeons & Dragons, but because they are off a-kilter from the main strain, there is much more room for...lets say the weird? The complex? The givens can be spun & recombined, allowing fresh takes on old tropes.

Gross seizes this potential to write a nice little tale of The Macabre. Set in a nation that evokes the classics of Gothic horror, a sort of Ravenloft country, Prince of Wolves allows your preconceptions to guide the story. With that weight on one side of the scale, he also allows those same assumptions to pay off in surprise by subtly subverting them. The narrative juggles back & forth between two characters, the aristocrat & the bodyguard. Seperated right off, each brings a different facet-view of the story's prism. Count Varian Jeggare is a noble of Cheliax...the devil-haunted nation. If you'll forgive a tangent-- Cheliax is another example of the fun sort of distaff worldbuilding that Pathfinder engages in. It is a country dominated by the state worship of Asmodeus, who they call the Lord of Law (& others call the Lord of Lies). Gross doesn't apologize for this; he just takes it as a given, just as Varian's half-elven race doesn't bare ponderous explanation. One of the strengths of genre is that readers have a collective set of heuristics to bring to the table; they "get" it. Varian's bodyguard is Radovan, the hellspawn-- if Wizards of the Coast didn't have the term trademarked you'd probably call him a tiefling. He's diabolical in mien; there you have it. See, that wasn't that hard to explain.

Something that struck me was a number of over-lapping interests between myself & Dave Gross. German-style duelist schools who cut each other's faces as a mark of honor? Well, heck, when I read about those guys in By the Sword I knew I had to use them, & hence "The Scars" appeared in my last campaign. There are other bits I guessed at-- the nature of the ultimate villain was clear as crystal to me, but I realize others might not jump to the same conclusions. It is just the stuff I'm "into." There is a bit of "you got werewolf in my gypsy...you got gypsy in my werewolf...you got chocolate in my peanut butter" going on, & the resulting genealogical pay off paints a compelling picture. Which is half the fun; Gross knows when to lay on the exposition, the Sherlock Holmes deductions, but he also knows what to be a light touch; he has the skill of letting the reader feel smug for having "figured it out." He also has a flair for the descriptive; flocks of sheep hung from trees, scarecrows with phallic protuberances, that kind of thing. Intrigue! Excitement! I liked it a lot. I am glad to see that Paizo isn't content to let their Planet Stories line of pulp reprints stand alone-- they are out there putting new pulp adventure on the shelves, too. 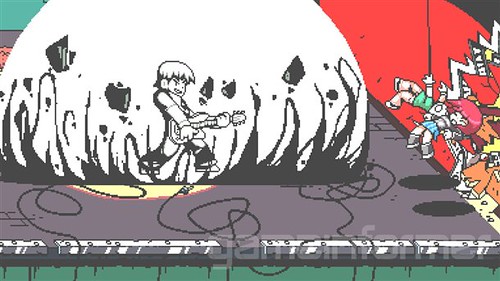 (from the Scott Pilgrim video game, from Game Informer.)

The rainy day opened up its guts, gave the Viking Blood Wings & dumped all the blood in its lungs over the City of Gotham. & well, yeah, zip, there went my motivation. Doesn't matter; did my gym-thing yesterday & I've got time to go in a couple days, too. Though all of a sudden everything is converging on this weekend. Today ended up a mess of nothing, then; handfuls of something pulled up from the dirt that just turn out to be nightcrawlers. Tried to watch a couple of movies; it turns out all of the Resident Evil movies I got from Netflix to keep me company I've already seen. How did that happen? Later I put on Let the Right One In, to finally watch that. I got about thirty minutes into it before; well, before i was just about done. On the plus side, I remembered that Portishead exists. So I can let Jenny Lewis drink a glass of water or something. I couldn't listen to the Mountain Goats; too cheerful. That is a good sign, right? Speaking of glasses, I'm on my third & last & then for bed. I'm going to shoot for hitting the sheets. This self pitying schtick is boring even me! I'm not really; I reiterate that point. I'm just enjoying wallowing in the dark & listening to the music of a misspent youth. I mean, what otherwise business have I been up to? Well, really nothing much. I know a shadow. I spent a fortnight in Dunwich. I sang a song across the ocean to R'lyeh. Yes, I'm pleasantly spooky glum. I continue to be very unhappy with sleeping; I slept on my arms last night, sucking all the blood out of both of them. The morning was the saga of the pins & needles; I'm Raggedy freaking Mordy. & I am sleeping through the whole night? Normally I guess like...vibrations from Jenny wake me up? I get up, I go to the bathroom, maybe I stare out the living room window (Batman pensively overlooking his city, Superman staring into the ice wastes) then I potter back to bed. Instead I'm just trapped in the dark phantasmagory that I guess is always lurking. Which is fine with me. Black thorns come & darn my socks! Night fangs come & gnash in my ear. You are the Anti-life for me! We've got a war to fight here, right Beth? Well I do, anyway. Aw, forget this. I am going to go listen to "Trying My Best to Love You" (a game I am the winningest of winners at, by the way) & then go to bed. Look at me, all smug & self satisfied now. & like a crocodile, my teeth don't line up, they goblin out of my mouth on either side. & like a crocodile when you see me crying it don't mean what you think it does. Come start a land war in Asia with me, baby. I want to roast marshmallows at the feet of Jeanne d'Arc. I want to find the Dark & Stormy Knight & gun him down from our turret. I guess I'll just sit here lurking on my throne of glass. With my crown of iron & all the rest. I'll wait here for you to come back, baby. I know you aren't on the internet. I'll punch in our numbers into websites. To make sure that the hive mind keeps spinning, to keep the un-church bells ringing.
Collapse