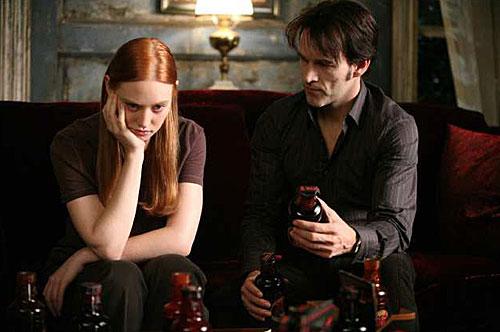 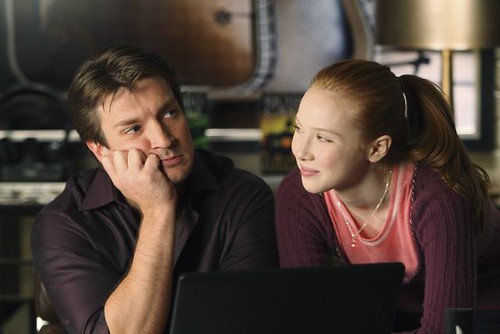 We've been on a True Blood kick, since the season two DVDs are out. That really is an exceptional show; one of those things that transcend the source to become their own discreet thing. Vampire Bill & Eric Northman are great, but Vampire Bill's progeny Jessica is my favorite. I might have a thing for the maker/progeny, sire/childer story, since Interview with the Vampire's Claudia is also a favorite of mine. Jessica reminds me of Castle's Molly Quinn, grown up a bit. Anyhow, I enjoy that her "vampire adolescence" isn't being over-played, nor are the characters aware of its nature as a symbolic adolescence. Her story was one that could easily be flubbed, but that I think is fulfilling; plus I had a spoiler from the season three poster that she isn't dead-- so that is good. I was worried she'd get "removed" from the story. The weird psychosexual zone where I want her to be my daughter & also make out with her...well, okay it is weird, like I said but that is the whole point of vampires, transgressive sexuality. Sexy cannibalism! Sexy necrophilia! Anyhow; everyone talks about True Blood & it is just nice that is is good. The show knows when to make vampirism a stand in for racism or sexual orientation...& it knows when to make vampirism about sucking blood & killing people. & it can drop a "reveal" on you that you totally weren't expecting-- like Barry!

Otherwise, I haven't been up to much. Sleepy, vaguely stressed. Freyja's day was all over the place, for me-- I had some weird professional business to take care of, for one thing. Swing & a miss, on that, but I'm not sweating it; getting up to the plate is the hard part for me, anyhow. I'm not standing still, even though I haven't gotten ahead; it is like lightning-- things build until zap, they arc to the next neuron. I just have to reach the action potential. So I'll keep rubbing my shoes on the carpet. Then I flew out the door to get lunch with Jenny & Marie at an Indian place. I ate a lot of food! Came home & was doggone tired. I fought off the sickness I was catching, I did my work week & my extra credit, but I've been pretty lax about the gym. I hope to make some of that up today. Yesterday it was all I could do to read a book; I was too tired to even take a nap. Jenny came home eventually & we went to Get Fresh, where I proceeded to space out. I mean, just staring into the wall with a dopey look on my face. Like I was literally doped. Still, the food was good; I had a prawn appetizer, a pig's head tamale middle course & for the entree I had scallops over bok choy. Jenny had a duck confit appetizer, the same tamale, & pork belly. I was much more charmed by the place as a somewhat upscale casual dining establishment-- when I went to it before I thought of it as being much more middle of the road so I ended up with a little sticker shock. In the end summation, I'd recommend it for dinner but not for lunch. Then Jenny & I picked up a bottle of wine from Picada y Vino & split it while watching more episodes of True Blood.

Today, yikes. I left the house once, but I ran all up & down Fifth Ave in the process. I went to the hardware store where I saw one of my company's vice-presidents. We did "the nod" & I bought drill bits, insulation, & some doweling which they cut to the right length for me. Now our apartment is double secure with the air conditioners screwed in & braced. Then from there to the general store where I bought shower soap (I use some liquid stuff with a loofah) & mouthwash. Then my errands took me to the comic book shop to look for Frenemy of the State. They didn't have it-- I sort of wanted to buy something from them to support local comic book business, but I'm also sort of pleased they didn't, so I can keep running my books through Kit Marlowe & Co. Since they were a dead end, I went & picked up brunch at The Fifth Avenue Diner. Then, well-- more True Blood. Jenny is going to visit her parents (my in-laws!) next week, which is sad news; it also means we have a bit of a True Blood deadline. 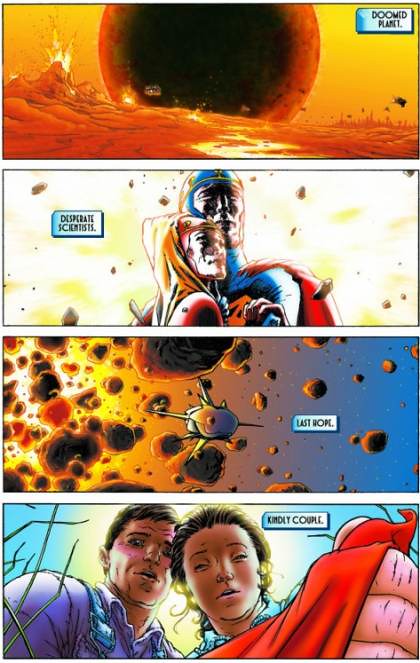 Some of the greatest four panels of comic books-- & they were published in 2005. Grant Morrison's All-Star Superman just plain gets it. I mention this because since last Odin's day, I've read a few more of his Batman & Robin & such. & passed them on to Sherene, too. Now Jenny is cooking in the other room & I'm lurking in the air conditioning, updating my online diary to kill time. So far today we've...watched True Blood. Now I've opened beer & retired; I'm taking the week off, that is what I've decided. Last week, I mean. I'm post-dating it. So yeah. I'm just going to laze about tonight. I had tea & a lemon bar; I mixed myself a potion. That is about all I've been up to. I am going to run my Oubliette game tomorrow & I'm excited about that. I'll put a few pins in the dissection during the morning, but I've got ideas. I'm trying out new stuff! New stuff. Gosh, I don't know. Superman. He's it, he is great. I have been thinking about it. I said when I re-read Gilgamesh that I think that is the best "death of Batman" story; I guess the Illiad is the best "death of Superman" story? But you know, again: Morrison gets it: BATMAN & ROBIN WILL NEVER DIE! & Superman will retire into the solar core to build a machine to save us all. That is just the situation. Get used to it! Today at the grocery store I read the "produce code" sheet on the wall to tell the girl ringing me up what code the carrots were & she freaked out like I was some god-damn genius. I just pay attention to context clues! So yeah. What do I expect from tonight? Well Jenny is using her grill & cooking up vegetables & chicken thighs & maybe quinoa? Then well, I expect I'll drink some more beer (Smuttynose Summer Weizen Ale) & watch some more True Blood. I'll make up for my sloth next week. Now I'm just eating up time. & now my bottle is empty!
Collapse