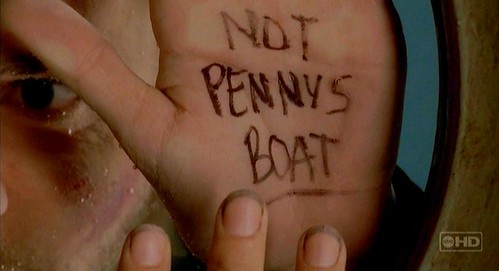 We caught up a bit on LOST last night. I mean it when I say a bit; we just saw the first episode of the last season with Desmond. Obviously it was Desmond; the only other character I thought it might be was Charlie, so I want surprised when he showed up in the episode. Hey, none of the characters needed extraordinary punching in the face in the two episodes we watched! That counts for a lot. Other than that, I am not very talkative. I'm sort of clamming up? For no particular reason. I'm busy & behind at work; meetings, meetings, meetings. I am going to wear a vest tomorrow for my "once more into the breech." Yesterday I managed to get myself to the gym but found myself devoid of energy & motivation. I think I'm fighting off the sickness Jenny had; my throat is a little bit narrow. I lifted some weights & did some machines but like, couldn't manage to convince my body that more than two sets was the plan. Old skin & bones was like "yep, I'm just about done with heavy things." So I ended up on the elliptical machine watching an episode of Star Trek: The Next Generation. It was the episode "Allegiance" which actually was fairly decent. Then I read a bunch of Batman comics! The next "Return of Bruce Wayne" story, set in a Puritan witch-hunt. Not for nothing but Grant Morrison stole all my names? Not only is Batman's alter-ego in the past "Mordecai Wayne" (as seen below-- & how funny is the term "alter ego" when applied to the psychological mess of Batman?) but his enemy is Malleus, which as anyone will tell you is my Star Wars sobriquet: Darth Malleus! As well as my nom de vampire. I like it for a lot of reasons, not least that it is a homonym with "malice."

The Artificial Ape by Timothy Taylor.

"More machine than man,"
says Kenobi, the wizard,
to the Skywalker.

How you write this book without including the above quote about Darth Vader I'll never know. Reading this book gave me the idea that I might just be kind of up to date as far as armchair anthropology goes? When he started waxing about Catching Fire I had the moment of "Hey, I know about that." This book I read on the basis of

kingtycoon's praise; in specific him telling me that this book my suit me. It doesn't particularly, but not because I thought it was terrible. In fact, I'm glad I like it-- the discussion Taylor enters into here is sort of the forefront of philosophy & anthropology-- philosophy in the good way, I mean. Like Kuhn & Bayes & Darwin. The science of ideas. I'm not convinced by Taylor, but then, there isn't really a cogent argument; more like a collection of musing & observations. That isn't a complaint: I just want to call a spade a spade before you dig into this. You probably should; people talk about "the Singularity" & Transhumanism as the nerd's Rapture, & it is; Taylor wants to start you on the short course to Cyborg Theory, though he doesn't mention or cite Haraway. To be human is, if you take Taylor's word for it, to be part artificial...& that is the thing that defines you as human.

Timothy Taylor's central axis for Artificial Ape is an interesting one. He posits three over-lapping layers (4). The first is physics, where for instance rocks roll downhill. The second is biology which doesn't violate the first but does subvert it-- a deer can walk uphill, seemingly but not actually against the law of gravity. The third is technology, where the second system can be subverted-- an ape can exist with weak arms & no claws or fangs & bring down an elephant to eat. This is Kurzweil's "Singularity" (though Taylor doesn't mention Vinge), Kelley's "Technium" & Crutzen's "Anthropocene" (8, 200). Taylor is quick to embrace con speaks of Dawkins' memes sort of dismissively, but his arguments about the memes could easily be seen as self criticism (140). I like the three systems, it is descriptively useful. It is symbolically sound. It is also sort of ill defined & vague. That is its strength, & its weakness. Both are fine sorts of paradigms, but they are starting points, not end points. There is a toss away line that I like best in regards to the three systems-- he says as viruses are between systems I & II, while humans are between II & III. I quite like that; that is some treasured take-away. I'm not sure I agree with some of his axioms-- he sees the survival of people with bad eyesight & bum legs as going against natural selection for instance, while I think we're just looking at high diversity during a population bloom.

The Artificial Ape dips its toes in some of anthropology's "chicken & the egg" problems. We need a short gut to stand upright, but we need to cook food to get a short gut (27). We need our hands free to harness fire, but we need to stand up to get out hands free. What the heck? He even has a few bits on how veganism & raw foodism can be seen as short cutting organic caloric needs with fossil fuel calories (91). I am with him on his core point: technology can come before biology. Sometimes, that is the only way of looking at human evolution that makes sense. He has a big fat chapter on what he calls "The Smart Biped Paradox." Human heads are too dang big; the arithmetic between infant survival, bipedalism, & big brains just doesn't make sense (104). Smaller heads would mean more living babies, so hominins should have tilted that way, right? Instead human brains are so much bigger than the nearest relative-- Taylor compares it to a fictional big Savannah cat that can run 200 mpg-- why be so much faster than the competition (188)? He solves the riddle by postulating the advent of the sling (110, 198). As organic technology, you won't get it in the fossil record, which is a problem-- but we do know that Homo et al. weren't limited to sharp rocks. Taylor caps off his discussion of bipedality in this book with a wonderful mention of Neil Armstrong-- the first thing humans bragged about on another planet was that they could walk-- "That's one small step..." (181). He doesn't talk about Hrdy which seems like a lacunae; this sort of thing is up her alley. For that matter, Bickerton, while we're talking about anthropologists I know a thing or two about; there isn't much discussion about language at all, though at least there is a little about symbolic culture.

There are fair bits of conjecture & speculation here. The Tasmanian natives; he spins on that pinhead for a while (49). He is both willing & unwilling to discard first hand accounts-- which is a tricky pickle, I'll concede. Are we to say that the things sailors were writing were true? Even knowing they are coloured with confused cultural context? In the end I think it is a wash. Taylor has some insights; his talking about Tasmanians & mirrors, Fuegans & naval ships in particular (145, 184). I'm struck by imagining what gifts similarly technologically disparate groups would give to Americans. A machine that provides instant, indistinguishable clones? Weapons that kill with a thought, since life is cheap & replicable? Sure, the old US of A would freak out. Whose "Naturevolk" & "Kulturevolk" now, Klemm (35)!? There is some discussion of sustainability later, in particular in regards to the Tasmanian natives & the strip mining that came afterward (201). There is a nod to it, but I think he underplays the megafaunal extinction that took place in Australia & North America after the arrival of the peoples that would later become aboriginal.

The nooks & crannies of the book are pleasant. I didn't know about BRBs, the mass produced bowls for gruel that prefigure disposable packaging (99). Plus ça change, plus c'est la même chose! The discussion on the sagital crest & pressure on the brain was made particularly colourful by pointing out the vampire's lack of one-- & its necessity (64). He talks about Antony Gormley's "Another Place," & the style is easily & immediately recognizable, since my job's neighborhood has been taken over by that same artist's "Event Horizon" (157). He talks about the Drake equation, & doesn't say silly things, but does call the radio shell a bubble-- it is only a bubble if we suppose it doesn't stop, & I think it must (178). He discusses, in a distaff part of the book & not as a main point, sex & gender & queering that interplay-- without saying anything offensive (168). I hadn't heard the term "skeumorph": false representations of former status & functionality (153). Like plastic take in wood panel colouration or the divots in wine bottles. He talks about broken facial bones as a sign of high status primate agression-- guilty as charged (58). & very memorably, in another high take-away image, he compares a cell phone to a Acheulean axe & well wouldn't you know it, they do read the same, somatically (183).
Collapse