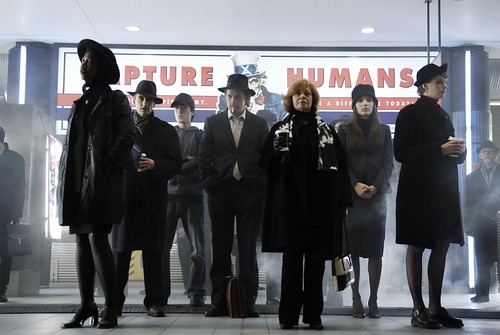 Monday was slow & easy. I didn't even go to the gym; having not seen Jenny all weekend I decided to stay home with her. I played some Mega Man 9; I am on the Doctor Wiley levels so I have to beat it all at once, which means I've been treading water. Getting better though. I was fussy in the morning; not enough to eat! Eventually that was remedied & then we watched Daybreakers. The skeleton of that film is an idea worth watching; the actual movie, not so much. The idea of the all-vampire world is engaging & something I haven't really seen done since I read I Am Legend, but the promise doesn't carry through. If the movie had only been about food shortages, about blood supply & a synthetic replacement-- that could have been something. Adding in an asinine cure allows a fairly clever ending, but only at the cost of making the rest of the movie worthless. Who cares about any of these people? There are smart moments-- the vineyard was a nice touch-- but ultimately the film could have been The Vampire Matrix but instead went with being nothing much at all. After that we went to the Chip Shop to eat. We wanted to go to a sea food joint, actually, but it was closed on account of the Memorializing. Dinner was funny; we talked about politics. Talking face to face about politics with someone you know really well it weird; you don't want to agree with everything, so a lot of the time Jenny & I don't bother, except to go "did you see...?" "Yes, ugh." After dinner we came home & watched some of Eddie Izzard's "Dress to Kill" show. That always makes me think of

littlewashu. Well, Izzard does I mean. Anyhow, then to today, which was a day at work of mailings & meetings, meaning I continue to not get much of anything done, besides the projects which are obviously getting done. Now I've been digesting a bit of a sandwich while Jenny works late at a community board meeting; I think I'll pop out for a bit of the old iron pumping. Don't you think?
Collapse