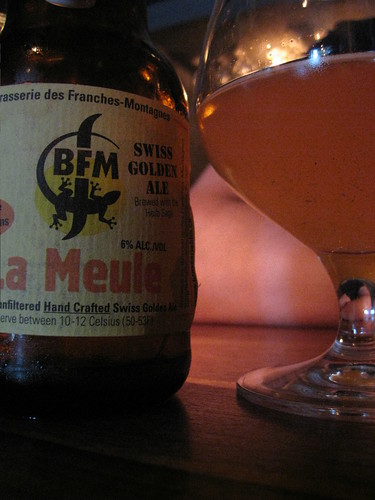 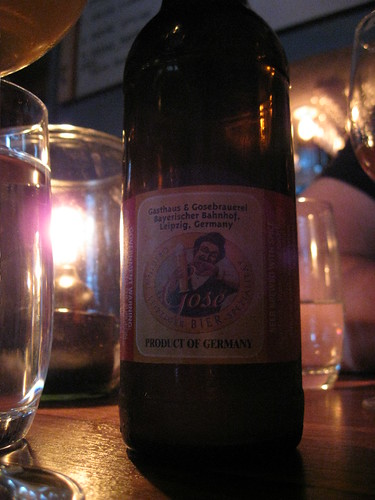 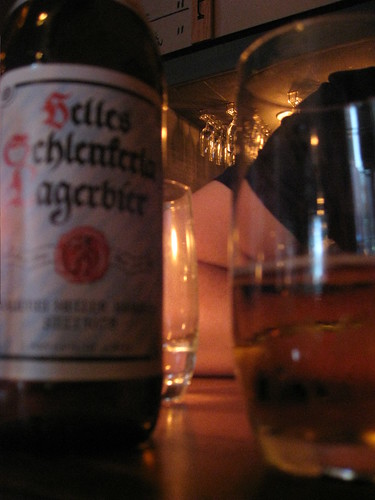 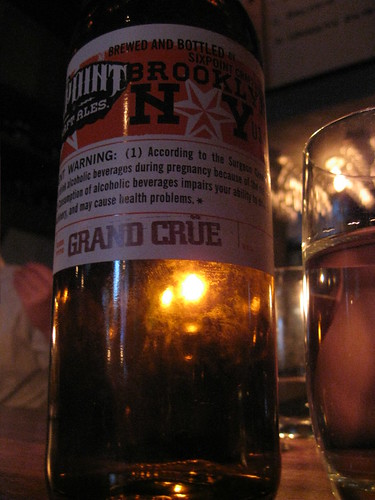 (Photos by Jenny, taken under duress.)

Last night we went to Beer Table for the beer & food pairings. They only do it on Tyr's day & I haven't been to one before, so I was excited. The fact that Tyr's day lined up with our anniversary is just gravy. So off we went, me & Jenny, hand in hand. She tried to deny flirting with me, but she was! We started off with some bad news: our favorite beer, the Professor Fritz Briem Grut, was out! They've gone to a new menu cycle. We ordered it before even looking at the menu, & I noted the new beers while the server was gone, & hoped that we'd hacked the system & we were getting one of the last few stashed bottles. Alas, no. So instead we started with BFM La Muele (grass, sage, honey, yeast, soapy lather, prickly) which was nice & refreshing, but not as weird as the Prof Fritz. That was just our order; then it was time for the pairings. The first course was spinach & pickled ramp salad & the beer it was matched to was Leipziger Gose (super refreshing, herbal, somewhat briny, salt, coriander). Both the salad & the beer were very salty, which was tasty but made quenching your thirst difficult; luckily our waitress was conscientious about refilling my water glass, so much so that Jenny made special note of it. The entree was rosemary butter beans with mayonnaise & bacon on bread paired with Schlenkerla Helles (soft, thirst quenching, laced with smoke). The beer is made by the smoke beer people, but isn't smoked; instead it is aged in the same barrels, giving it the hint of smoke without all the full gusto. Also, they say mayonnaise, but it was more like crème fraiche-- the meal was very ample! Dessert was vanilla gelato with strawberries & balsamic vinegar & the beer it was paired with was Six Points Grand Crüe (which wasn't described on the menu). I don't like sweets but I do like dairy & vinnegar! We had planned on getting another bottle after dinner (I had my eye on some disastrously dark stout) but we both agreed that we were way too full to contemplate putting anything else in our bodies. So yeah, I was well content & purring. Not bad for a c-note.

We came home & topped off the evening with the Lady Gaga episode of Glee. The costumes were great & Santana was amazingly hot, & doing the cabaret version of "Paparazzi" was the right call, but the episode was really...dramatic. Like, usually the episode is filled with melodrama or purposefully exaggerated conflict-- which this episode had, too, in Rachel's story with her mother & Tina's gothic ban story. Which by the way? Tina's goth story was hilarious? Hilarious, & had a great pay off. Kurt & Finn's story though was like-- drama, because hey, yeah, gay kids in high school are getting menaced & assaulted. & using negative slurs casually is not acceptable. I was unprepared for one of the three plots to be...intense? I think it worked though. The evening ended with Jenny & me manically amusing ourselves doing a thought experiment about making things by hand-- whether you had to go back to pre-Industrial models or all the way to making it from scratch, caveman style. It ended with me saying "well, this is Murder World, & murdering people is still illegal." Matter of fact! Jenny looked at me crooked & I said "...this is...Murder World, right?" & then we cracked up. Cracked up.

The Spider Order
all in silk & dressed in black,
masks of glass & iron.

I liked the first one so much I plunged right into the second. More pretty cover art, more pretty interior art, more pretty text. The biggest hurdle this book has to face is the simple fact that Moorcock has already given us the introduction to the societies & characters of the world after the Tragic Millennium. My mind wasn't blown by this book, but how could it be? The worldbuilding was already laid out in the first novel. I think the best bet is to send Dorian Hawkmoon to the fabled lands of Asiacommunista or Amerekh. That being said, the book doesn't drag its feet-- the first third is a "forgotten city" adventure, the second bit is the titular swashbuckling tale of the mad god & the third story returns us to the characters of Brass & Bowgentle. Really it is characters that make the second book interesting, in particular D'Averc. Who knows if he's a "good guy," & maybe he will betray Hawkmoon. Or then again maybe he won't, maybe he'll be a bosom companion for the rest of the saga. I honestly couldn't predict. There were a few times I had to flip to the front of the book to check the copyright page-- there is the sort of casual misogyny you'd expect present, but not in overwhelming doses. Just something worth pointing out, since it is always something within the genre that concerns me. So! Another Hawkmoon story successfully digested! I have a third one here & I might just start it on the train ride home, if nothing else catches my eye.
Collapse