Hawkmoon: The Jewel in the Skull by Michael Moorcock.

The black & the blue
of the Order of the Fly
glisten in the cave.

Wow, how about this book, coming out of nowhere? I picked it up needing some peanuts, reading a book to fill a gap before I committed myself to some lengthy work or some academic nonfiction. Having been fairly nonplussed by the several of Moorcock's Elric books I read previously, I thought I'd just get a dose of middlebrow fantasy to soothe the itch. I was wrong! This is a heck of a book! The setting is post-apocalyptic fantasy, with the proper nouns dragged out & degraded: Granbretan is the evil alienist empire set on an island off the coast of Europe, Parye is the crystal city across the bridge connecting it to the mainland & so on. The characters & nations drip with detail & twists of the macabre; the sumptuous colours of the masks of Granbreton's Orders, the Brass Count & his giant flamingos, the eponymous jewel set in Dorian Hawkmoon's head. Oh yes, I did quite like this. I worry that, the puzzle pieces of the world now laid out, the series might droop, but I'm anxious to find out. & hey, Hawkmoon isn't a relentless jerk, like Elric. That is a nice discovery; Elric is meant to be a bad-ass anti-hero but he comes off more like a petulant crybaby utterly incapable of taking responsibility for his own action. Hawkmoon is the shell-shocked veteran, the affect-less patsy who snaps to & seizes destiny. I much prefer him; & to boot these volumes have nice cover paintings & interior illustration. Hooray for treasure troves! 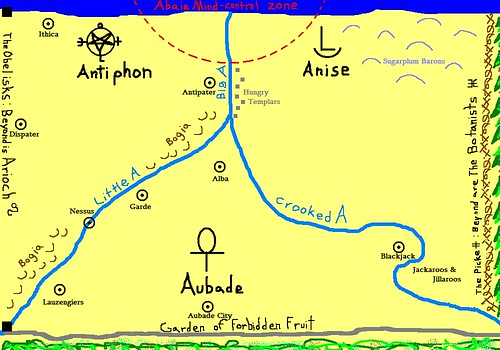 Each kingdom is small; around 100,000 citizens. Think more like the various warring states of Feudal Britain or Renaissance Italy or the Kyu of pre-Imperial Japan.

A kingdom of vast open spaces, where the deer & the buffalo roam...& the mammoths, & the thunderfeet, & the muties. Human "Mobs" run the gulfs between urban centers, each part tribe, part cowboy nation. "Rippers"-- pygmy Demi (panhumans under four feet tall) riding on dinosaurs-- are kept at bay by the Alpha nobility, each with their own hot brand for heraldry, astride their massive & odd destriars-- mounts part horse & part...something else. The Aristocracy is under the reign of the Licorice Duke, who contests with the wealthy & co-operate Sugarplum Barons (think Dutch East India Tea Company). The Pearl Queen, who once ruled many lands, has not been heard from in quite some time. To the east, bounded by The Picket which holds "The Botanists" at bay-- strange green men who murder any they come across to plant seeds in their bodies. To the south, the Jackaroos & Jillaroos of Anise hold the Crooked A river against the technological theocracy of Aubade. The Big A river is guarded by the Hungry Templars, whose grim demeanor is the result of solid defense against the Sin-state, Antiphon. The North is the Sea, & the impassable Abaia Mind Control zone which eventually turns all who enter it into zombies.

Antiphon is the most schizophrenic of the three kingdoms. Its population varies the most wildly-- sometimes several hundreds of thousands of people surge in their Medieval cities, Skyscraper Cathedrals growing & armies expanding. Then war or disease or political purges or some force of history moves upon it, tearing their numbers down to the tens of thousands, leaving their cities more than half abandoned. The infernal "Inquisition" holds people in thrall with secret police tactics, & the "Pharisees"-- the governors of the Temple-cities-- let them. While rooting out whiffs of heresy & witchcraft, the Inquisition simultaneously enshrines it in their numbers, as "Apostates" practice their strange arts of circuitry & seal-making. Cotton-wrapped "Mummyfolk" Demi live below the city taking care of the many dead. The religion praising the monotheistic "Authority" is everything in Antiphon. Their border to the east is held by the great city Antipater, against the reckless & monstrous people o Anise with their debased mutated nobles. To the south, Antiphon has dug many fortifications called Bogia, & the river city of Nessus is the only route of trade with the pagan technocrats of Aubade. The western border is marked by the great lighthouse Obelisk, held by ancient treaty with the Witch-kings of Arioch. The third obelisk stands out in the Sea to the north, along with the Abaia Mind Control Zone which uproots the seat of the soul to any who try to colonize it.

Aubade
Keys: The Living Gods of the Last Trump, Archeology of the Future, Wandering Volunteer Government.

A nation of boom towns & ghost towns, the wealth of Aubade is in mining, though not in the seeking of crude ores or gemstones; rather, Aubade draws forth from the ground ancient high-tech relics, archeological finds of advanced ability. The search for antiquities has brought sudden riches to the lowest miner; the puzzling out of that object's purpose has made a tinkerer famous. For every success story of course there are a hundred hardluck tales-- but that is the nature of the world. Aubade is a cosmopolitan state, with the panhuman races living side by side & intermingling. Chugging iron engines provide power to sparking bulbs; coal furnaces boil to keep bobing airships high in the sky; clockwork vehicles run in the streets with horses. The current regime in Aubade is the organization known as the Arcanum. The Arcanum is split into four branches-- the Cups, Pentacles, Wands & Swords-- each of which is overseen by a "Jack" & numerous other officials. The Arcanum is all the law & order that Aubade shares-- they are the US Marshals, they are the posse, the are the wandering tax collectors. Religion in Aubade is dominated by the pantheistic worship of The Trumps. The Trumps are physical, actual deities; gods that can be found & beseeched. There are three Trumps that most panhumans acknowledge-- The Hermit, The Fool, & Strength. It is bordered by the nations of Antiphon (the home of the demonic Inquisition Board) of which the Little A river is the border & Anise (the plains of the uncanny Licorice Duke) which is delineated by the river called Crooked A-- & Aubade is bordered also by the Garden of Forbidden Fruits, which no one-- no one-- has every violated & returned from.

Names in Aubade recall the name of a philosopher & a time of day: Aquinas Midnight, Jefferson Twilight, Cathar Mid-Morning.
Collapse