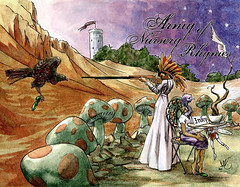 Aunt Nancy & the
Baron Saturday chuckle,
with guns in their hands.

Full disclosure: I've been friends with

inktea for a decade. When I was stranded in Minnesota she gave me succor! She's the Mordicai Court Nocker, as far as I'm concerned. That doesn't mean these poems don't fully kick-ass. Rather, take my friendship with the author as proof that the poet kicks ass, & strong evidence that the poems are similarly exemplary. They are! The cover by Dax Tran-Caffee gives you a pretty good idea of what you are getting into. Faerie tales set on their side, retold with a cunning eye & a canny ear. Inky's not afraid to lay down some beats: poems like "Cinderella" demand to be read aloud, the cadence luminous & dribbling off the letters. "Stand Up/Chicken Little" talks about her fascination with science poems (if nursery rhymes are the "one" then science is the "two" in her "one-two" knock-out combo) & the aggravation getting poetry critics to take them seriously. Being clever doesn't preclude being good! "Boy Blue" might be my favorite poem, if only for the imagery, & I look forward to Inky & Cali doing a more in-depth exploration of it. She turns gender expectations upside down in "1001" & "Prince Charming," & when she rants about being vegan in "To Market, To Market," it isn't annoying or preachy-- just personal. & it was nice seeing artwork by C. Laird & M. Rogers, & made me miss "This Watery Grave." & for the record, let me record the poem inscribed on the cover for me & Jenny:

We know the truth about nursery rhyme
How often death himself
starred in Grimm's tales,
how delightfully gruesome
children's storybooks could be
so hover like buzzards over Brooklyn,
beloved monsters,
loose the green ribbon,
and wield Bluebeard's iron key
like a sword to Pandora's chest. 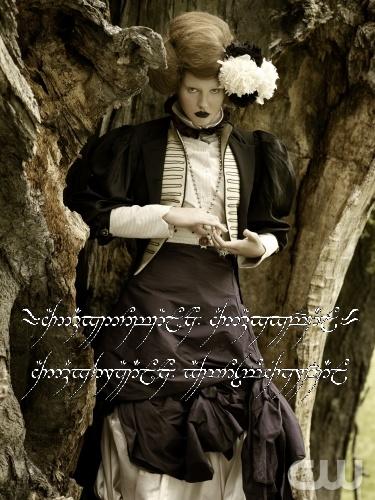 Yesterday I took my lunch break with Nicole & got cracking at Banana Republic. We get rewards & discounts there with our credit card ("we" being the marriage unit) & their shirts actually fit me, which is a shocker. Most places assume "medium" means "scrawny" & that "large" means "chubby." I am neither of those things. I need a shirt that can fit my shoulders ("broad") but not billow at my waist (..."athletic"?). So yes, shirts, pants, boxers. We some some street art which for some reason everyone is talking about today, & then that was that. Oh I also bought a quiche & was heartbroken to bite into it & find green peppers. Blech. Then home & finishing up some reading with Jenny on the other end of the couch. Went to Rachel's to pick up a sub-par burger for Jenny & some fine ribs for myself, & we threw on some Daily Show & a few minutes of How I Met Your Mother while waiting for

elladorian. HIMYM was almost funny? The baggage gimmick seemed to be working! I would sure like that show to get its feet under itself again. It used to be a barrel of chuckles, but lately has just been a puddle of...also chuckles.

Then, the Madox-Dorians arrived, David & Maggie. All we had time to watch was the two-hour season finale of America's Next Top Model, so we got into the mud, the blood & the beer right away. Literally "the beer," since I managed to spill an entire bottle of beer everywhere in the kitchen. This season of ANTM has been a drag. Sure, they cast some weirdos, but those "strange girls" turned out to be...well, a mess. A bunch of pathological liars & people with mommy issues. So, once they were removed from the mix, the show became a rather banal exercise, only occasionally spiced up by the Tyra Crew antics. Oh this show cannot survive without Mister Jay & Miss J let along Tyrabot. Speaking of Tyra, those crazy jumpsuits she's been wearing all season? Yeah, she made them. Unfortunately finding that out spoiled the ending of the season cycle for me. Well, sort of; I kind of knew it would by...whatever her name was, who one. Krista. Boring McTooSkinny. I was rooting for Raina because she's very pretty, but you know, she wasn't amazing or anything. Oh, the show stealer was Nicole, from last cycle...dear Nicole, seeing you walk reminds me of the fact that you are amazing. Nicole is a real success story for me, she's evidence that at least SOME of the winners are good at what they do. Proof of Concept. Though the discussion of "successful" contestants showed that the panel of judges is well aware that their picks are not always the ones who end up "on top" in the end. Except Tyra, she's always on top. Edit: Jenny also got cupcakes & a black & white cookie, which led to David's plaintive plea: "...nooo, Coffee Toffee!" when his slice started falling off his plate. 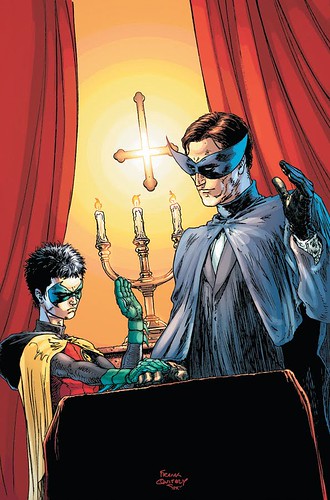 This morning I read the first issue of Batman: The Return of Bruce Wayne. Basically, Batman was "killed," & Nightwing (the grown-up Robin) took over, with Batman's psychopathic son Damian taking over as Robin...& Grant Morrison writing, so it is kind of awesome. Anyhow, of course you can't kill Batman; somehow he ended up...traveling through time. Starting with the beginning of humans. Seriously, the start of Homo sapiens. Batman...versus a bunch of cavemen...led by Vandal Savage. This first issue was fun, & they call Batman "Man of Bats," but really it is the high concept that has sold me. Batman...traveling through time. Caveman Batman, Knight Batman, Pilgrim Batman, Cowboy Batman...awesome. All of it set (it seems like) in the spot Gotham City will eventually grow. It is like those Spawn toys, only instead of lame it is sweet. Anyhow, meanwhile...I bet that is probably Doctor Hurt or something, but wouldn't that be radical if that was Nightwing's new costume? If Nightwing went back to being Nightwing & was...well, a Morrison/Moore-esque weirdo? I mean, seriously, when your father figure is Batman, you've got to have a pretty different approach to "odd." I want Dick Grayson to be like the anti-John Constantine. Sure, he's involved in weird, mind-bending, alien, Lovecraftian, horrible murder mysteries...but he can handle it. You know who the last Nightwing was before Dick Grayson? Superman. Yeah, Nightwing can handle the situation.
Collapse