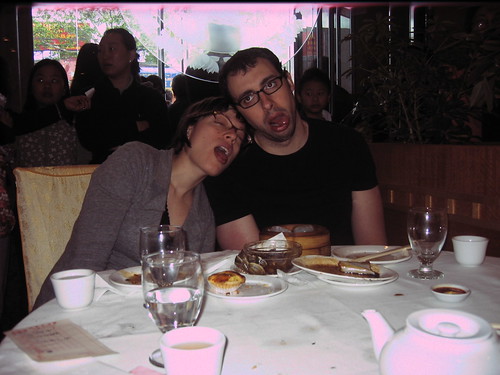 Sun's day was a heck of a day, a slew of adventure, a harvest of merriment. By the end I was a desperate grasping little baby Mordicai, but lets set that aside for the nonce. The morning began with a desperate bundle of rushing about! Plans, their puzzle-piece teeth slipping across each other, suddenly slipped into place! Traction, gear-teeth enmeshed; everything crystal clear & congealed at once. I was a free agent:

kromelizard had alerted me that his game was canceled. So! First! We must fling ourselves into action-- to meet Kira & Nino to go get Dim Sum at East Harbor Seafood Palace in Dyker Heights...which is halfway Bay Ridge & halfway Bensonhurst. I've been to this place before with

aquestrian before, it turns out. Oh man, Dim Sum. First off, Kira is the boss, & that sure is great! She's the get-up-&-go girl, she'll chase down a Dim Sum cart! & because she's so proactive, the staff reacted, bringing us plates of food first to see if we'd take them-- & we usually did. Seriously, my stomach did its duty that day. Like the steel belly of a locomotive, a steam-driving boiler, full to the brim with Chinese coal. We jammed ourselves full of every possible little dumpling or bun or such ilk that we could. Thus filled, we retired back to Kira & Nino's to pick up some grass-fed, unpasteurized, un-homogenized whole milk (with the cream added back in!) & then back home, finally. 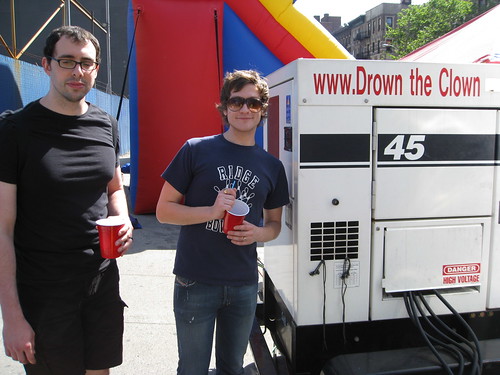 (Mordicai & Phil, "Drown the Clown" in Chelsea, photo by Jenny.)

...only to immediately turn around back out the door! We went up, up, up on the D train; up to Chelsea for the Chelsea Street Fair. Considering that there was a street fair going on outside our apartment on the avenue, it might seem somewhat odd that we'd zoom north to Manhatta, but the key here was meeting Phil! Which we did & in short order we were walking the streets, surrounded by throngs seeking cheese & meat & fried goods, in various combinations. I didn't eat much, sneaking a few bites of Jenny's Kimchi Burrito (which really, conceptually, is an amazing idea) & a Lobster Roll from Red Hook Lobster Pound, which was...well, that was pretty dang tasty. Then we wandered around trying to find a place outside to sit & have some drinks, but the whole world seemed full to crowded. Cursed rainbow, I'm saying-- the world needs a-flooding. I'm the opposite of Bastion today, I guess. In our travels, our bar-diaspora, we spotted an ad for a Doo-Wop group & my cunning eyes picked up the existence of the unfortunately named HI-Value gloves. We ended up in Phil's apartment drinking, & then home. On the train there were some struggles with a family-- the Dad all "You cool?" all aggressive when I looked at the ball they'd sat on the seat next to me. Dude! I'm not judging you for that, but rather for letting your kid throw candy everywhere & punch you. Raising a miscreant is your prerogative though.

Then finally finally home. We watched Saturday Night Live & I started sinking into infantilisim! Jenny had prophesied that after a weekend of gaming & not seeing her I'd be desperate for attention. Well, I only did the first half of the all-DnD weekend (in Tracey's Ravenloft game) but I was still all needy. I think I was tired, & the beer in me wasn't fortifying my constitution but rather provoking a childlike worry of abandonment! While I'm keeping score, I think having nightmares all weekend didn't help-- Jenny woke me up a couple of times telling me I had been having them, & I'd woken up from them on my own, too. A little boy with white hair riding a bicycle is the image that sticks with me. Last thing Sun's day night was the watching of the first half of Castle in the Sky which is great? Unsurprisingly great, but also very long! Or long for what I expected. Coupled with the aforementioned crabgrass Mordicai, it was tricky going. At 9:30 Jenny graciously stopped the movie & let me crawl to bed. Then last night's dreams were that Jenny told me she wasn't interested in having sex with me or pursuing me romantically any more! & repainted the bedroom, even. So very sad, plus I didn't wake up from the dream so it was like eight hours of being broken up. Boo. I'm over it now, now it is Moon's day. Time to cat's cradle the maze of boxes! 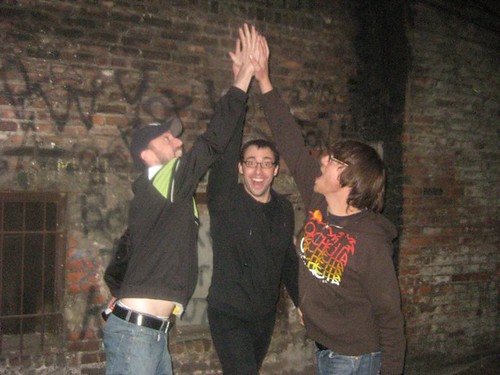