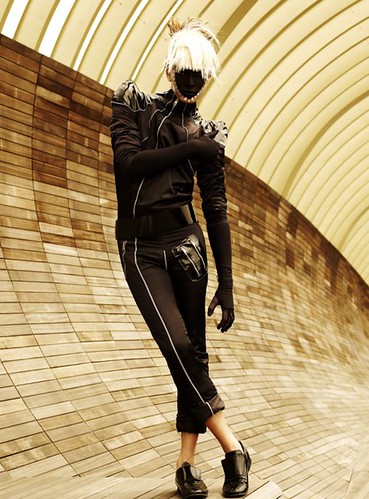 Last night was Tracey's Castle Ravenloft game, as part of Sam' recuperation vacation from his back surgery. It started late, so I had time to hit the gym & sort of vegetate at home before heading over. The character I decided to make was an Elf Thief (pictured above), with pretty decent stats. When I got there, Ian had already arrived & he & Sam were rolling up crazier more in-depth characters, you know? We were using Advanced Dungeons & Dragons, so I went with something easy but Sam was hip deep in kits & special racial exceptions, making a Grey Elf Bladedander Fighter/Mage; Ian was similarly, if not quite as, complex, with his Halfling Fighter/Thief. Sam & I decided to go full Sindarian with our character names, & I thought I'd go one better & do it from memory-- of course I only know the roots of very cheesy nouns, so I ended up Curulókë, "The Clever Snake." Also sort of in honor of my old Middle-Earth Role Playing character, Fëalókë, later Morlókë after he broke his Staff of Power. Nerds! Eventually Peter showed up & made a Human Fighter & we were ready to take on the adventure! Now, I've played Third Edition's Ravenloft adventure & it was a disaster! It was an amazing meatgrinder, killing a whole sheaf of characters, & we didn't even complete it (though I will point out that my Dwarf Ninja/Paladin survived)! Tracey was using a modified First Edition module, though-- so I knew plenty was different. I had a lot of fun, deciding that my character was super jaded & full of Melnibonean angst & ennui. It was the Star Warsesque opening crawl, the "read this to the players" that made it so! My background was convoluted-- I had thought we might be in Ravenloft, so I included some of that stuff. He was from "The Bone Orchard," a grove of Gulthias Trees grown from the stakes used to kill a coven of vampires. His clan lived under a hill in the manner of the Mirkwood elves, & were basically the elf version of a hippy commune-- the "Smiling Parliment" was a governing body elected by drawing short straws, like jury duty, children we raised in cohorts by the community (mine was the "Glass Apple cohort" in honor of my MERP character again). Anyhow! I've never been in a game Tracey ran, & it was fun! I punked out & left early-- the plan was to pull an all-nighter, but...well, that was their plan. I knew I would leave early! I left at a good stopping point, & when Peter went to take a nap, so I don't feel too bad. My goal was to stay till the tarot reading, & I didn't, though. Also I fed Sam & Tracey Banana Bread Beer, which made Tracey make all kinds of cute bewildered noises. One last DnD note: in the Creature Competition on the Wizards of the Coast site...I'm not doing so hot. All my picks were eliminated by Week Four, & all my subsequent picks are the losers. I think I may differ from the mainstream of players?
Collapse