A "picket" is a
wooden spear, sharp at both ends,
used to hold the line.

Jenny made fun of me for reading a textbook, but I don't care! So by telling you what this book is you already know what this book is about. I mean-- it is exactly what you imagine it to be. An armchair historian's guide to warfare in "The Ancient World"-- meaning the Western Civilization's idea of "The Ancient World," so starting with Sumeria, moving through Babylon, Assyria, the Akkadians, the Hebrews of course, on into Egypt & the Hyksos, then to Greece & the various city-states therein, the Persians, then to the Romans who are of course the meat & potatoes for most readers, & the Goths & Huns & ending with Byzantium's cataphracts as direct precursors of the Medieval knight. The book hits all the guys you'd suspect, is what I mean to say-- the usual suspects. There is a lot of fleshing out of the non-big names, which is where I think the book excels. There is perhaps an over-abundance of information on the Hebrews, but then there is a famous historical document to draw from, whether or not it is of dubious value. I will admit I liked Dougherty's theories about Joshua at the Battle of Jericho. Far & away the best thing about this book are the copious illustrations. They are detailed enough to be accurate & evocative but not enough to be...well, made up? Sometimes attempts to portray the past get bogged down with "filling in the gaps" but art in this book strikes a wonderful happy medium, & includes photographs of archeological objects for verisimilitude. Maybe it is the Dungeons & Dragons nerd in me, but the depictions of weapons, gear, & seige-works give me a bit of a thrill: I've re-drawn a picture of fortifications that put me in mind of some rather nasty traps: 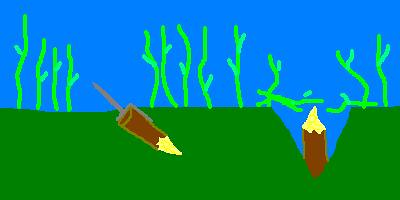 Actually last night worked out pretty well for me! I blew off some work friends again-- I'm always blowing off work friends, because I am a homebody. Seriously, doesn't going home to hang out with your wife sound better than going to a party? Parties, I scoff at them! Actually my evening ended up super a-okay, though nothing happened. Called Jenny when I exited the train per the usual & she said she wanted hamburgers, so off I went to Corner Burger to pick things up. Sat there & read my book while they cooked. Went home & we ate them while watching Modern Family; I think one of the things they did that was smart was make the Humphries dad a dork rather than...awful. Now his dorkiness is endearing & coupled with his wife's awkwardness at it-- well, it cracks Jenny up. After that though, Jenny felt like taking a nap, which was perfect, since I felt like going to the gym! I puttered around & looked at the internet for a while so the meat from the burger could get in my belly, & then off I went. Nice 1:15 at the gym; after I tired out my arms curling, I took a break & then went back & did more curls. Good job, willpower! I just remind myself that I am a soldier of darkness, I am a weapon of malice, & then channel that into picking up heavy things. Came home & I don't think we did anything? I took a shower & we read in bed a bit. So yeah-- nothing much happened, but it hit the spot. I wanted to continue my trend of working out & reading & I did. It is by will alone I set my mind in motion, also my body. The Sleeper must awaken, see? Then today in the mail I got the book I won, so...so far so good. Then Tom said: "so oubliette is pretty much star wars meets road warrior meets howls moving castle." Which...does this mean he gets it? Because it sort of pretty much is.

Player's Handbook 2 by Wizards of the Coast.

We've got the Wolfman;
Frankenstein & Dracula
races must be next!

The nice folks at Wired were nice enough to send this my way, along with a Players Handbook (1) that I'm going to give to

fordmadoxfraud to replace the copy his dog ate. So what is the verdict? Well, I've seen some of these classes & races in play, & some of the races in "monster race" form, but I'm happy to have them expanded. The races are neat, right off the bat. The Deva...well, maybe they are better than Aasimar? Maybe I only think that because I think Aasimar would work better as a bloodline or feat tree off of Tiefling. Gnomes...gnomes are like what elves are to humans, but for halflings. I'm okay with that; nay, I'm down with that. I wish Goliaths had some embiggening power, like Bugbears do. Half-Orcs are a disappointment! I really think the ball was dropped here, in a major way. Playing to the stereotype of the out of control rager, really? What I wanted to see, quite frankly, was something more like the Half-Elf. You know, something that participates in Human-like qualities-- the Half-Elf power of another classes' At-Will echoes the Human's extra At-Will distinctly, & not carrying that theme over to Half-Orcs was a missed opportunity. Shifters on the other hand are great! I normally hate trying to cram two races into one stat block, but these guys are inter-related & really evocative. I totally want to play a Longtooth Shifter, maybe partly because of my Tiny Adventures Shifter Avenger.

The racial paragon paths suffer from the same problem that the rest of the paragon paths do: why so specific? I mean-- you're telling me that a teleporting Eladrin wouldn't make a good Fey Beguiler? Or that a Dwarf couldn't be a cool Stoneblessed? & I get that Wizards of the Coast is invested in putting out more books with more classes. That fits their business model, that makes sense coming from the people who brought us Magic: The Gathering, & I don't mean that in a snide way. I just think it is the wrong way to make money. If this book had information on the already existing classes-- you know, like new Warlock pacts or new Fighter At-Wills or whatever, then it would appeal to a broader demographic? I guess they are being somewhat "fair" by keeping that stuff in separate books like Arcane Power, but I for one always want more from my favorites. & I didn't like Arcane Power. Maybe that is a factor. Anyhow-- don't tell me my Narrator or as Narrator that I can just house rule them to allow anyone to take them-- with the rise of the Character Builder that is much less of a viable option.

Besides that the classes in here are neat-- I particularly like the mechanics for the Druid. Barbarian is neat for having the "noble savage at the head of a great host" option. Bard wins with me for "Multiclass Versatility" which is an amazing class feature-- I want it! Druid as I mentioned-- the "Beast Form" keyword opens up player choice in a really fun way-- to be a creature & tear things up or be a person & cast spells? Druid & Shaman have an important caveat-- go ahead & describe your form however you want! Bear, Owlbear, primal monster, whatever-- same stats. Invokers...seem like Warlocks to me. Sorry Invokers but you just seem like a new type of Warlock pact to me...though it is neat you don't use holy symbols. Shamans I don't quite get; I'd playtest one just to see how it works, you know? Sorcerer's are great, practically a standby-- & I really like that Wild Magic is a power source; part of the reason I got this book is because I want to make Encre Panache a Gnome Chaos Sorcerer, since he's a Gnome Wild Mage in AD&D 2e. Warden's are another class I don't see the need for-- they are Defenders? How are they special? They have good saves? I'm missing the hook. Is the hook that Ranger is in the PHB(1)? That seems to be their role.

Backgrounds...are a way to get a class skill, & that is okay with me.
Collapse