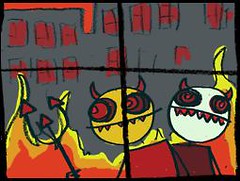 I think I have a "case of the Mondays!" I don't normally, you know? I mean, it isn't like I particularly want to go back to work after the weekend, but I'm not usually this...lethargic. Jenny was very tired all weekend; I wonder if there is some sympathetic effect? Or you know, disease or something. I snoozed in bed after the alarm! I never do that. I mean, partly it has to do with the fact that I don't have a "wild & crazy time" so much anymore. I mean, my big night out last night included two beers with dinner! Nuts! Yeah, so Sun's day. Woke up, watched the Betty White Saturday Night Live episode which arguing with Jenny about breakfast. It was fine-- mostly nice to see a triumph of the internet. I wonder what the viewership statistics were like? Anyhow, if you watched it-- that is basically what SNL is like all the time. If you thought it was funny, you might want to start watching SNL. Or just waiting for the good bits to show up on blogs, whatever. Then I fried some eggs in a basket-- I added cheese before I should have, before flipping it, which was dumb, but I salvaged it & they were good! Then to the gym for a nice little bit of slaughter & bloodletting. I've dropped five pounds, which is good because this winter weight is gross. Then I went to the druggist to pick up supplies & a prescription. I usually never have to pick up prescriptions, but this is mouthwash from the dentist. Okay, if you say so dentist. I sort of feel like this "deep cleaning" & prescription mouthwash business is an insurance scam, but I want to keep my teeth (heck, I want extra teeth!) so I don't mind jumping through a few hoops.

kromelizard was talking about how mean novocaine is, too!

Eventually we sorted ourselves out & went out into the cold. It has been really cold lately! I like it, but we (especially the wife) were under-dressed yesterday. Oh, lets not forget; before we left we watched Modern Family, & last night we watched infoMania & The Rotten Tomatoes Show, whose new format I'm not crazy about, though I do like the mini-Tomato Meter at the recap. We picked up a six-pack of Magic Hat's "Wacko," which I like for being beet-coloured, & went over to Kira & Nino's. Kira's influence has been felt largely in my diet lately, not just with Oakridge Kitchen stuff or hanging out more, but because she recommended Real Food for Mother and Baby to Jenny. Now I'm taking spoonfulls of cod liver oil at night (which tastes like...fish liver, with a minty aftertaste) & brewer's yeast in the morning. Straight up brewer's yeast, which is weird & more odd than gross. I think downing two spoonfuls in a lowball glass of water is the way to go, out of the way's I've tried it so far (in cereal, in yogurt & granola, in a fruit smoothie). Dinner was similarly yuppie, with grass fed organics & such. Note that I say yuppie rather than hippie-- we've had talks about it, & we're pretty cognizant that certain eating choices, whether for health or taste, are matters of class. We pay more for whatever free-range, hugs & kisses, green grass cow flesh because that is an economic choice; many aspects of this aren't universalizable. I especially want to take note of that, since I'm usually arguing for the universalization of my opinions. This isn't one of those times, necessarily. Anyhow, then we cracked ourselves up for hours talking about circumcision & being gross. Then back home through the relentless cold! 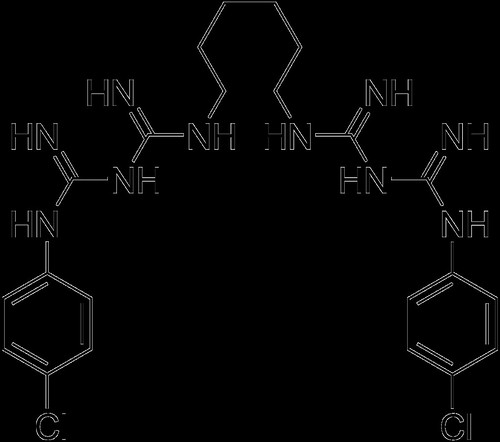 (This is the chemical structure of the active ingredient in my mouthwash.) 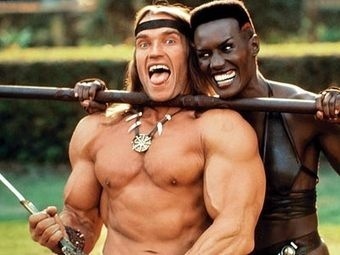 Left Macmillions & was hit with a bucket of bricks. Just exhausted! The work day closed with some aggravating number chasing, then there was the hammer to anvil of the commute home. Normally I have a painless train ride, snaking through the dark in the iron serpent. I usually grab the local (or as I called it to Kelly today, the "loco," because Spanish puns crack me up) & sit down & read. Today though, the subways were all messed up (because of track debris?) & so I ended up standing up & having to transfer & not getting a lick of reading done. I know, poor me oh my. Went to the grocery store & bought a bunch of fish while a redhead made eyes at me. Came home & locked myself in the bedroom rather than be grumpy with Jenny. I was all snarls. I really do wonder what is going on; my theory is that all the vitamin-stuff is making my body go into high production mode-- like manufacturing complex compounds while it has the chance. Either way, I am bushed. Jenny cooked up the salmon & some brussels sprouts, & we watched Glee. The show continues treading water; there is more Kurt at least, though now I want more Quinn. Also more mash-ups; these "by the numbers" songs are a snore. Jenny & I were under the comforter snuggling, because she demanded "a cuddle puddle." Then that ended & we laid around chuckling (about throwing an imaginary kid named Jerry into a volcano) & now she's watching the final "on-demand" episode of Weeds. I'm drinking a glass of Fernet-Branca, which pleases me with its chemical & herbal tastes. I don't know what the rest of the night will bring, though not much. I forgot that I wanted to see Iron Man II tonight. Oh well, maybe Odin's day?
Collapse