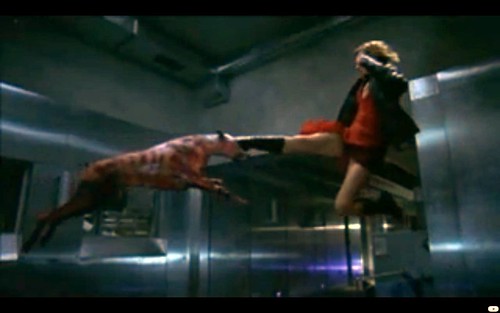 I just got done watching Resident Evil. I knew

iphisol liked it, & she & I have similar taste in a certain kind of film: that being the kind we call "B." The only other one of the movies I've seen was Resident Evil: Extinction, which I watched for the first time with Jenny on our honeymoon-- & was awesome. I liked this movie too; I guess there are detractors? Which is silly, since it clearly is what it is, see again "B-movie." I kept waiting for Wesker to pop-up, but nope; also I have a weird expectation that Wesker will be played by Jonny Lee Miller-- I know he doesn't play him, but I feel like he should. Mostly it makes me admire Milla Jovovich, which...well, no duh. Every nerd likes her, & I think with good reason. She is an awesome action star, & really attractive to boot. The thing that cinches it is that, well...despite the fact that basically every movie she's in starts with her waking up in a lab? She manages to be the prime agent of the story. Well, more specifically what I mean is, her roles are beyond "Damsel in Distress," even when you think they might otherwise be. Violence & weird sexy bondage aren't...well, they don't seem like they are misogynist? I don't know if it is her choice of scripts or what, but even though you get beat-up Milla Jovovich waking up in a body horror laboratory in a skimpy outfit, it just doesn't read as offensive or prurient. On the other hand, I can't help but hate Michelle Rodriguez; I think her role as Anna Lucia on LOST ruined her for me.

Last night I came home to find Jenny asleep! Which worked out for me, since I was sort of faltering in my devotion to going to the gym; with her napping, I had no choice but to go! So off I went & had myself a merry little workout. Then home to an awakened wife to watch a particularly funny episode of The Daily Show, which is usually so below the radar that I forgot I've watched any episodes. We washed that down with Community, which; phew! That is some amazing television. This paint-ball episode was a pastiche of bug-hunt & post-apocalyptic films, & it was super funny. Following up on the recent Goodfellas episode, well. Lets just say it is probably the strongest sitcom airing right now. We watched 30 Rock too, which while good, was not nearly as epic as Community. Sorry Tina & Alec. Then this morning I woke up & had to go to the dentist! They did a "deep cleaning" on the right side of my mouth. Six shots of novocaine this time, rather than the eight from last time. Before my body sort of freaked out, confused about whether my face was broken again, but this time it was no sweat. Well, I mean. I hate getting stabbed in the mouth. The dentist was like, "are you good?" & I was like "no, this isn't my favorite, you are stabbing me in the mouth!" & she laughed. I just cope by turning on the rational part of my brain & thinking about the needle as being the doctor's gom jabbar. Which it is. Mostly now it has worn off, & I can feel my face again. & now I'm listening to Make-Up & Vanity Set "Presents: The Protomen", which are 8-bit covers of the first, self-titled Protomen album.

The Protomen: Intro / Breaking Out from The Protomen concert by Emma Story.