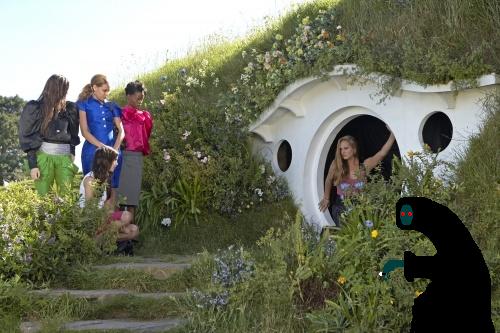 Last night's America's Next Top Model was a perfect storm. This cycle has sort of been terrible-- or at least, boring-- but they more than made up for it in one fell swoop. They did a photo shoot in Hobbiton! See, this cycle of ANTM's "destination" is New Zealand, & since New Zealand turned the location where Peter Jackson's Lord of the Rings shot the Shire into a park or whatever & left the hobbit holes up...well, they went there to do a photo shoot with the actress who played Rose Cotton in the film! She was the guest judge & that was fun. All the girls have fallen apart-- there is just constant petty infighting-- & somehow Alex is still on the show. Arkansas went home, as well she should have. I still think Raina (Seaman First Class on Davey Jones' ship Leviathan) is the pick for the win, though now I expect Krista as her last foe, though I suppose Angelea would make better television. Before Top Model though, I had a pretty packed Odin's day. Lunch in the park, then home early! So as I can run to the gym & do an hour of power. Actually, I crammed a pretty good workout into that hour by skipping some cardio. Grabbed some Mediterranean food, bought flowers for Jenny (Mordicai is the best husband of all) & home...but then what ho?

fordmadoxfraud? They're on time, which is nice but now I am the fool! Who is behind, because I have to shower! So I throw on Avatar: The Last Airbender-- we watch "The Water Scroll" & "Jet," the latter episode of which I like for its fight choreography more than content. Then: the episode of LOST with Richard's flashback. A nice change of pace-- I like Nestor Carbonell & if the fan-generated buzz has any weight, why, I'd accept him as Khan Noonien Singh. So! That was that. Also, awesome loot.
Collapse